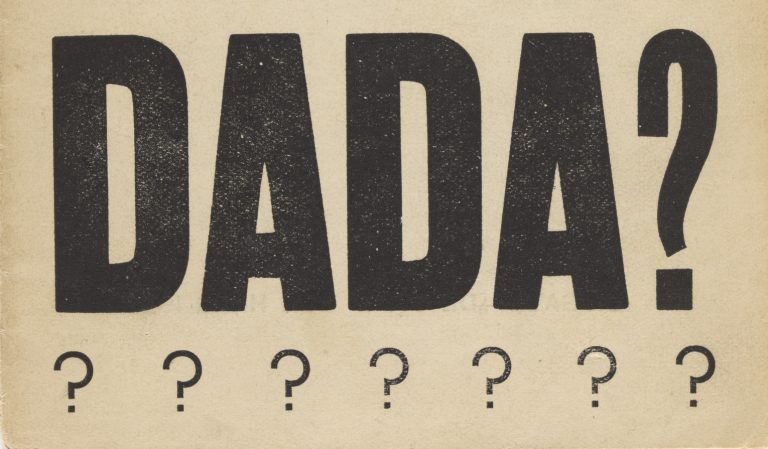 Watch One of the First Dadaist Films by Man Ray

Considered a pivotal moment in art history, a lot has been said about the Dada movement. Rejecting everything (even themselves!) Dada members cultivated an ambivalent attitude. This naturally leaves the field open to all kinds of interpretations, even those that are contradictory! Because that is the Dada spirit. However, this kind of philosophy makes it harder to clearly comprehend the movement. How do you distinguish between truth and falsehood? Between fact and legend? To clear up any confusion, here are 5 myths about Dada deconstructed.

Myth 1: Dada is an art movement

If by “art” you mean every kind of creative expression including literature, poetry, dance, painting, sculpture, cinema, music, etc., then yes, Dada is an art movement. However, Dada artists wanted to make an impact beyond the art sphere. Contrarily to Impressionism or Cubism, they were not driven by pure plastic research, but by political and social concerns.

So technically it would be more correct to define Dada as “a holistic movement, mainly composed of creatives who aimed to change the whole society ”. But it would be too long to say, or even to write.

What is interesting is that there are not a lot of art works left from this movement. The main reason is many Dada artistic creations were actually non-reproductible performances. The spirit of Dada still lives through a few testifying photographs, their many manifestos and publications.

Funny enough, this affirmation contradicts the precedent. Indeed, how could an art movement be anti-art? This is exactly where the interest of Dada philosophy lies; a tension created by a permanent contradiction. Still, Dada isn’t so much against art than it is against a certain conception of art.

Dada members despised the elitism of institutional art, controlled by and for a few privileged ones, such as art critics, gallerists, the bourgeoisie, and even some artists. To protest against this system, Dada artists did not operate a career change. They expressed their disagreement with the society in which they lived by doing what they knew best: making art. An art in complete opposition to the official good taste. An art as ludicrous as World War I, as trivial as everyday life. Art that would no longer be one.

It is almost impossible to read anything about Dada without a reference to Marcel Duchamp. Yet, Duchamp was never officially part of the group. Marcel Duchamp is a free electron, an iconic figure of the 20th century, who changed the rules of art forever. In that regard, he overshadowed many artists and, in this case, even movements.

Duchamp’s readymades are considered emblematic Dada artworks. However, Duchamp’s earliest readymades appeared between 1913 and 1915, a few years before the movement was even born. When Hugo Ball and Emmy Hennings founded the Cabaret Voltaire in 1916, Marcel Duchamp was already an expatriate in the United States. He only discovered the movement afterwards, through Francis Picabia.

What is certain is that Dada artists and Duchamp shared some similarities. Firstly, they had the same aversion to official art. More importantly, they created works based on the use of humor, scandal, and — of course — readymade. Just as Edouard Manet was the pathfinder for Impressionism but never actively took part in the group, so is Marcel Duchamp to Dada.

Contrary to most avant-garde movements  — and even those coming before — Dada women artists were numerous. Unfortunately, even though there were many women artists in the Dada movement, they were not fully considered as equals to their male counterparts:

None of these men were satisfied with just an ordinary woman. But neither were they included to abandon the (conventional) male/masculine morality toward the woman. Enlightened by Freud, in protest against the older generation… they all desired this ‘New Woman’ and her groundbreaking will to freedom. But—they more or less brutally rejected the notion that they, too, had to adopt new attitudes… This led to these truly Strinbergian dramas that typified the private lives of these men.

Despite the reluctance of Dada male artists to acknowledge their own sexist attitudes, it didn’t prevent Hanna Höch from expressing herself and creating freely. After all, it is she who pioneered the most famous photomontage technique.

The lack of consideration for Dada women is also largely due to previous generations of art historians. It is widely known that until recently, only men influenced the field. The latter had ignored women artists, erasing their names from the books. Today, the importance of women artists in the movement has been reestablished thanks to people like Naomi Sawelson-Gorse and Dr. Ruth Hemus.

Myth 5: The origins of the word “Dada”

There are at least three official versions explaining the choice of the movement’s name. For once, the confusion doesn’t stem from art historians and critics in disagreement, but from the members of the group themselves. In one version was it was found by Hugo Ball who held a French-German dictionary, in another it was Tristan Tzara. It was during a large meeting, or in the intimacy of an evening. While each version differs, they all confirm that the choice of the name was random. Even the veracity of this fact is suspicious though…

Even the contemporaries of Dada could not guess the truth about the origins of the name. So, a century later, the truth is even harder to decipher. This is the result of the movement’s savant public relations. Despite all possible contributions, it only leads to more confusion, which is one of the main characteristics of Dada.