Masterpieces from the Frick Collection 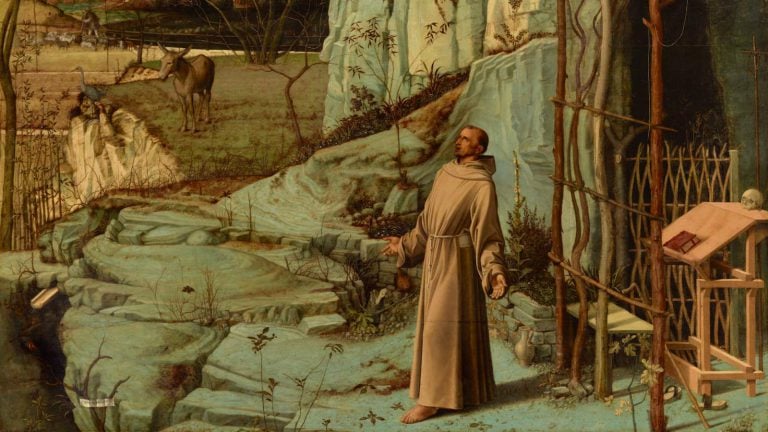 The Frick Collection in New York is one of my favorite art museums! In honor of DailyArt Magazine’s July 2020 collaboration with this illustrious institution, enjoy ten of its most celebrated masterpieces.

The Flagellation of Christ by Cimabue

Cimabue’s small panel painting The Flagellation of Christ is among the Frick Collection’s medieval and early Renaissance treasures. It appears alongside other gilt religious paintings and beautiful enamelwork. Cenni di Peppo, aka Cimabue (c. 1240-1302), was an Italian who contributed to the beginnings of naturalism in Renaissance painting. Works by him aren’t plentiful, and the Frick’s example is one of only a few in the United States. The Flagellation of Christ was originally part of a multi-panel altarpiece, from which two additional pieces are currently known. One was discovered in the early 2000s and is now at the National Gallery in London; another turned up in France last fall.

St. Francis in the Desert by Giovanni Bellini

Venetian Renaissance master Giovanni Bellini’s St. Francis in the Desert is definitely among the Frick Collection’s best-loved masterpieces. The painting depicts St. Francis of Assisi (1181-1226), founder of the Franciscan Order, having a vision in which he receives the stigmata of Christ. This powerful moment, seen in the foreground, is a popular subject in Christian religious painting. However, Bellini didn’t focus exclusively on the event itself. He also set the scene in a beautiful and detailed Italian mountain landscape. The rocks, plants, animals, and distant town are all clear, peaceful, and precise. Bellini presents a spiritual, otherworldly event in an environment wonderfully grounded in reality.

This is an iconic portrait of influential Tudor scholar and parliamentarian Sir Thomas More (1478-1535). King Henry VIII executed More for failing to support Henry’s divorce and break with the Catholic Church. For this reason, More is a Catholic saint. He looks powerful and impressive in this portrait, which shows him wearing rich clothing and a thick gold necklace that signifies his service to the Kings of England. Holbein’s rendering of the red velvet sleeves is particularly sublime. Although German by birth, Hans Holbein the Younger was important in Tudor England as portraitist to Henry VIII. In a great display of curatorial irony, this portrait hangs in the Frick’s Living Hall on the opposite side of the fireplace from Holbein’s portrait of the man who condemned More to death – Sir Thomas Cromwell.

This is one of Titian‘s several commanding portraits of his friend, the great Italian writer Pietro Aretino (1492-1556). Both admired and feared by those around him, Aretino was often called “the scourge of princes”. This resulted from his masterful character assassinations of 16th-century Italy’s most prominent figures. Basically, Aretino was a professional blackmailer. He convinced wealthy and powerful people to pay him substantial amounts to avoid being on the wrong end of his razor-sharp wit. In this portrait, Titian shows Aretino’s imposing presence and privilege through his massive, well-dressed body. He also captures the great intelligence in his eyes. Gold chains like the one Aretino wears around his neck were important gifts and status symbols at this time in European history.

Rembrandt‘s The Polish Rider is such a mysterious and beautiful painting! Nobody is exactly sure who it depicts or what story it tells. There isn’t even a consensus about whether it is a portrait of a specific person, an allegory, or a representation of a literary or mythological character. The Polish Rider shows a young man on horseback, dressed in an exotic outfit that’s consistent with 17th-century Polish tradition. No matter its exact story, this moody painting feels like something out of a great epic. The work also has a further Polish connection, since it resided in Polish collections for many years.

There aren’t very many paintings solidly attributed to Dutch master Johannes Vermeer (1632-1675). However, the Frick Collection owns three of them. They are Officer and Laughing Girl, Mistress and Maid, and Girl Interrupted at Her Music. All three are classic examples of Vermeer’s work, since they include the themes and compositions we most clearly associate with him.

Officer and Laughing Girl shows a fashionable man and woman sitting in a well-decorated Dutch domestic interior. As is common in Vermeer paintings, light streams in from a window beside the pair. This highlights the girl’s features while casting the man in mysterious shadow. A large map of Holland fills the background wall, another common Vermeer feature. The atmosphere is warm and friendly, while the woman’s lively, laughing smile seems fully engaged in an enjoyable conversation. This small painting is quite inviting to look at.

The Arts and Sciences by Francois Boucher

The Frick Collection is full of masterpieces, but this one just might be my favorite. The Arts and Sciences is a set of eight panels by Rococo great Francois Boucher. Each panel represents a pair of arts and sciences as practiced by the most adorable little boy and girl. The arts are painting, sculpture, singing, dancing, poetry, music, comedy, and tragedy. The sciences are architecture, fowling, horticulture, chemistry, fishing, hunting, astronomy, and hydraulics. Charming and slightly comical, the scenes remind me of modern-day cartoons. Despite this, they aren’t simplistic. In fact, their little details reward close looking. I especially love how the boy in the Painting and Sculpture panel (below) is making portraits of the little girl who appears in other panels.

The Arts and Sciences may have originally belonged to Boucher’s great patron, Madame de Pompadour. The Frick family bought the panels in 1916 and originally installed them in Adelaide Frick’s second-floor boudoir. They now reside in the ground-floor Boucher Room, where they coexist with luxurious French decorative arts. The entire room is a work of art!

In fact, this seems like the perfect time to give a shout-out to all the spectacular and often-overlooked decorative arts at the Frick Collection. While the paintings are the big highlights, don’t forget to enjoy all the furniture, porcelain, silver, and bronze sculptures that beautifully punctuate the galleries.

Lady Emma Hamilton (1765-1815), the subject of this portrait, was certainly a colorful figure in English history. This actress married Sir William Hamilton, but she’s better known for very publicly being the lover of military hero Horatio Nelson. If she looks familiar, that’s probably because she was English portrait painter George Romney’s muse and frequent subject. He painted her over and over again. While Lady Hamilton as “Nature” depicts her as a contemporary woman, Romney more frequently portrayed her as mythological figures like Circe and Cassandra. Hamilton is gorgeous in this painting, but honestly, it’s her little dog that inspired me to include the work on my list.

Cologne, the Arrival of a Packet-Boat: Evening by Joseph Mallord William Turner

The Frick Collection owns two massive harbor paintings by English landscape master Joseph Mallord William Turner (1775-1851). The Harbor of Dieppe is slightly more famous, but Cologne, the Arrival of a Packet-Boat: Evening is equally spectacular. Cologne‘s focal point is the titular packet boat – a vessel designed for mail and passenger transport. The right-hand side of the composition contains a view of the German city of Cologne. The tall spire of Cologne Cathedral appears in the background just to the right of center. You can’t miss it, since it’s the highest point in the painting. Turner’s celebrated atmospheric effects are fully on display here. There is also a calm lucidity that’s often absent in his more romantic and painterly works. Turner loved to paint harbor scenes, and the Frick dedicated an excellent exhibition to them in 2017.

The Bullfight by Edouard Manet

Henry Clay Frick didn’t just collect Old Masters. He also owned works by a select few French Modern artists, including this one by Edouard Manet. The Bullfight is unusually horizontal and elongated, particularly when seen in person. That’s because it was originally the top part of a larger painting that Manet sliced in two. The bottom half, titled The Dead Toreador, is now in Washington D.C. Because Manet apparently modified both sections, it’s difficult to imagine what the whole painting would have looked like originally. However, I find The Bullfight’s abruptly cropped composition, which focuses on the periphery rather than the actual bullfight, to be dynamic and intriguing. The immediacy of Manet’s brushwork matches the energy of the scene.

The Frick Collection clearly loves Edouard Manet, even though it only owns one of his paintings. Late last year, it hosted a small and thoroughly-enjoyable exhibition called Manet: Three Paintings from the Norton Simon Museum.

The Frick Collection is so full of masterpieces that I could have easily filled three more articles with my favorites. I strongly encourage everybody to visit once the museum opens again. In the meantime, enjoy all of the Frick’s really amazing the digital content. I highly recommend Cocktails with a Curator. In this weekly YouTube series, Frick curators Xavier Salomon and Aimee Ng drink cocktails and discuss artworks from the collection. New episodes go live every Friday at 5 pm EDT.

Did you know that the Frick Collection is planning a major renovation and expansion to begin some time in 2020? Read all about it!

Psst – do you want some insider views on museum highlights? Check out: