Painting of the Week: Johannes Vermeer, Girl with a Pearl Earring 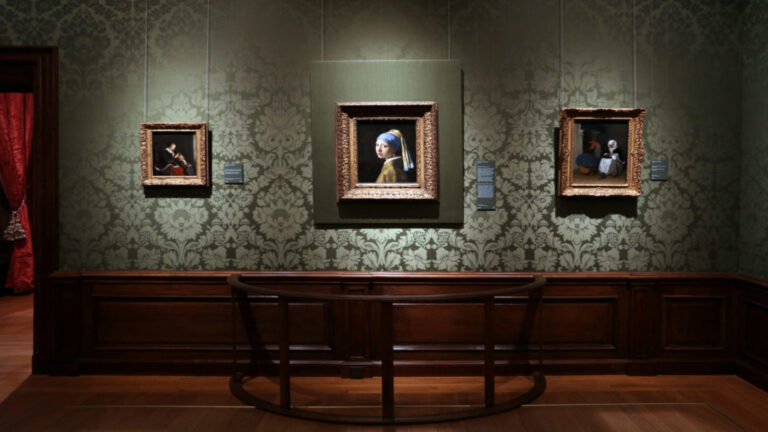 The Girl with a Pearl Earring is usually the first image that comes to mind when we think of Johannes Vermeer. It has inspired multiple references in literature, cinema, and popular culture. Perhaps many of you remember it from the homonymous novel by Tracy Chevalier or from the film in which Scarlett Johansson plays the leading role. Along with Rembrandt’s The Night Watch and van Gogh‘s self-portraits, it has become an artistic icon of the Netherlands. More than three centuries after it was painted, the Girl with a Pearl Earring continues to captivate our eyes and minds. In this article we provide some essential facts about this painting and reflect on what makes it a masterpiece.

Johannes Vermeer was a Dutch painter born in Delft in 1632 and deceased in the same city in 1675. He painted the Girl with a Pearl Earring around 1665 (scholarly estimations range between the years 1665 and 1667). Therefore, the painting corresponds to the Dutch Golden Age, a period of economic, scientific, and artistic prosperity spanning almost the entire 17th century. At that time, Holland was part of the Dutch Republic, a prominent maritime power made up of seven Calvinist provinces that had seceded from the Spanish Empire as a result of The Eighty Years’ War. Along with Amsterdam, Haarlem, Leiden, and Utrecht, Delft was one of the main artistic centers in Holland.

The Girl with a Pearl Earring is a tronie that represents a young woman wearing a turban and an exceptionally large pearl earring. A tronie is a type of painting which represents a person but differs from a portrait. In a portrait, the emphasis falls on the sitter. The portrait reflects the sitter’s features and, although it may contain accessories or allegorical elements, the sitter must remain identifiable. In a tronie, the emphasis shifts to the painter. It is the painter who must be identifiable. Tronies give painters the opportunity to condense the best of their technique into a single work. They showcase what a particular painter is capable of producing, often by including challenging elements such as exaggerated facial expressions or exotic clothing and accessories.

In the case of the Girl with a Pearl Earring, clothing and accessories are key. Here, we explain why: The hierarchy of pictorial genres in the 17th century was rooted in Neo-Platonism, a school of thought which considered ideas as superior to nature. Therefore, paintings that resulted from a great mental effort (“major genres” such as representations of mythology, classical literature or the Bible) were considered superior to the ones that reproduced images as the painter saw them (“minor genres” such as portraits, landscapes, still lifes, etc.). In practice, this hierarchy was applied flexibly in the Netherlands. Paintings of daily life scenes and even of vulgar environments such as taverns and brothels were common during the Dutch Golden Age.

But, for a painting of a minor genre to be admired as a masterpiece, skill and meticulousness were not enough. The painting had to comply with the rules of elegance and decorum. Neo-Platonism held that the purpose of painting was not just to imitate nature, but to surpass it. Therefore, it was not enough to represent a scene realistically or with many details. It was necessary to idealize it, to move it away from the mundane and elevate it to a higher status. Even if the subject of a painting was a scene of daily life, it had to be invested with “classical dignity.” Clothing and accessories helped achieve that goal. Elements of paintings that have been later identified as “Oriental”, “Turkish” or “Slavic” do not actually refer to a national or ethnic origin. Instead, they indicate that the represented characters have been taken away from their particular spatial and temporal contexts and placed in the superior realm of the ideal.

The Girl with a Pearl Earring is an ideal example. The character of a young woman with European features has undergone idealization through the use of exotic clothing and accessories such as the turban, which evokes oriental beauty, and the pearl, which reminds of the riches that came to Europe through international maritime trade. The result of this process of idealization is that the Girl with a Pearl Earring is no longer a Dutch girl or a 17th-century girl. She is a timeless and universal Girl. Being a sort of abstract ideal, borders of space and time disappear between her and us.

A similar use of dress was done by other Dutch Golden Age painters. We see below two examples, one by Rembrandt and the other by Michael Sweerts, a painter who worked in Amsterdam and shared with Vermeer the aspiration of providing classical dignity to daily life scenes.

It was usual for Vermeer to place some kind of barrier between the women in his paintings and the viewer, such as a curtain or a piece of furniture (see for example the Lady Writing a Letter with her Maid). But in The Girl with a Pearl Earring this is not the case. Additionally, the small size of the canvas and the dark monochrome background help create a pleasant atmosphere of intimacy with the Girl. Nothing distracts our attention from her. We see her directly as if she were a living woman turning her face to us when we call her.

Timeless, universal and incredibly close to us, the Girl with a Pearl Earring is a captivating masterpiece.

To find out more about Vermeer’s paintings, see the article on The Milkmaid and the piece on Young Woman with a Water Pitcher.