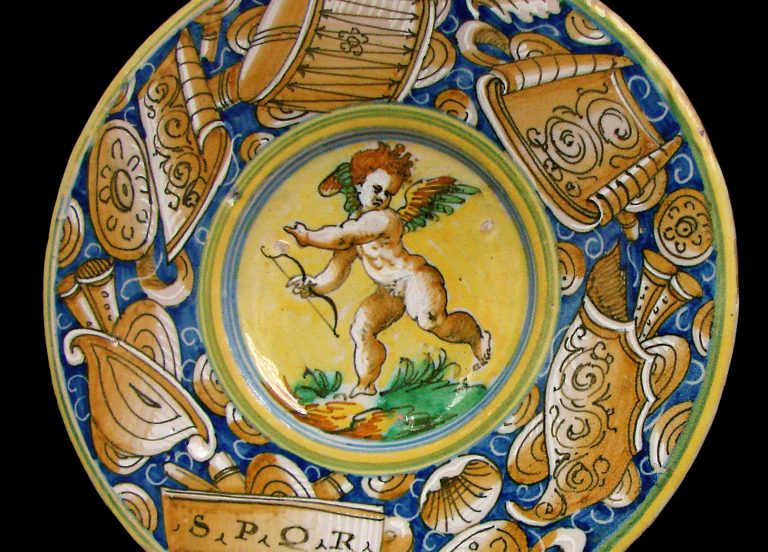 Maiolica ceramic wares are exquisitely decorated and vibrantly colored handmade artworks made popular during the Italian Renaissance. Their timeless beauty has inspired artists and fascinated art collectors throughout the ages. The maiolica technique illuminated ceramics that reflected the elegance of an era and continue to dazzle us even today.

Maiolica or majolica (mid-19th century to now) is a tin glazed technique applied to earthenware that was produced in 14th to 16th-century Italy. First, a tin oxide glaze is applied to fired clay that dries to form a white, porous surface. Then, the artist paints a design onto the clay with metal oxides and applies a transparent lead glaze before it is fired at a low temperature for a second time. Once completed, the metal oxides and glaze materialize into bright colors with a smooth, glossy surface.

Maiolica ceramic wares were largely inspired and influenced by Hispano-Moresque lusterware made by Moorish potters in Malaga, Spain during the 14th century, and later in the region of Manises, near Valencia. The lusterware technique likely originated from the 9th-century Middle East. This highly innovative approach to creating golden ceramic wares traveled to the west and inspired generations of artists. Despite its namesake, maiolica ceramic wares did not originate from the island of Majorca, Spain. Majorca did, however, serve as a major trade route for exported goods to Italy and other European countries.

Italians fell in love with these lustrous, metallic ceramics and by the 15th century, Italian artisans had studied and learned to copy the process themselves. They started to produce their own version of tin-glazed earthenware that became known as maiolica. The iridescent palette of the Hispano-Moresque ceramics was swapped for a jewel toned palette that featured cobalt blue, antimony yellow, iron red, copper green, and manganese purple.

Early maiolica designs are Islamic; they often depicted the Tree of Life, palm motifs and Arabic inscriptions. Abstract and geometric designs were also incorporated. Once the technique had reached Italy, later designs combined the Islamic aesthetic with Italian Renaissance motifs that reflected the time period: coat of arms, religious scenes, and plants or animals. Grotesque designs that featured scary or fantastical creatures also became popular during the 15th and 16th centuries.

Wealthy patrons and collectors often commissioned Piatta da Pompa or “pompus plates” (show dishes) to display in their homes. They were large, celebratory plates made using the maiolica technique and decorated in the istoriato style (a painting technique depicting a story or narrative) developed in central Italy around 1500. This style covered the entire plate and transformed ordinary tableware into stunning works of art. These plates often portrayed an important individual or highlighted a personal achievement. Other popular themes depicted biblical, historical and classical mythological scenes. Each piece was uniquely designed with the patrons in mind.

Maiolica apothecary or albarello jars were highly decorative and produced in various shapes and sizes. These jars were commonly found in apothecaries throughout Italy and Europe, and used to store medicinal herbs or tobacco. Their decorations often included words or inscriptions written in Latin. Some jars were designed with elaborate handles while others had spouts and were used to store oils or syrups.

Italian maiolica painters were revered for their remarkable skills inspired by art and literature: ancient Roman and Greek mythology, Italian and German woodcuts including the works of Renaissance Masters Leonardo da Vinci, Michelangelo and Raphael. Each painter had their own unique style and pigment recipes that varied from workshop to workshop.

Distinguished ceramist and painter, Francesco Xanto Avelli of Rovigo created eccentric maiolica show pieces at his workshop in Urbino. Avelli’s work was greatly inspired by classical literature, poetry, and biblical themes. He helped to shape and develop the istoriato style, along with another great painter, the notorious Nicola da Urbino. Nicola started his artistic journey in Castel Durante and later moved to Urbino to continue his trade. Together with his son, Guido (who later worked under the last name of Fontana) the two created highly sought-after works. Both father and son were heavily influenced by the engravings of Raphael.

Florentine artist Giovanni della Robbia took the maiolica technique to a new level with his sculptural reliefs. Della Robbia was renowned for his delicately rendered religious scenes and designs.

Today, there are many contemporary artists inspired by and working in the dazzling maiolica technique. California based ceramicist and former ceramics teacher, Liz Lauter, creates mind-blowing ceramic works using the maiolica technique and also inspired by Mexican Tree of Life candelabras. Lauter’s admiration for maiolica ceramics led her to briefly study the technique in Deruta, Italy. She now fuses her love of painting with her ceramic creations. Lauter’s maiolica inspired works are “an unusual combination of the tree of life constructions with sculpted details fired, tin-glazed, and hand painted with ceramic colors.”

Another contemporary artist working in the maiolica technique is Gabriele Reina, a prolific Italian painter. Reina learned the maiolica technique at an early age and has since developed a deep passion for the medium. His remarkable ceramic works honor the maiolica tradition fused with a modern edge. Aside from maiolica, Reina also creates marvelous works with oil and tempera paints.