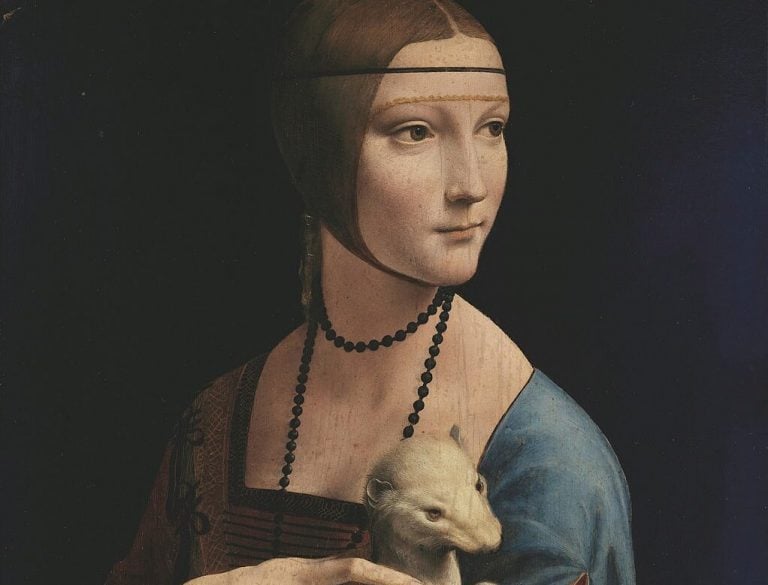 One of the greatest masterpieces of Western art, Lady with an Ermine by Leonardo da Vinci, presents Cecilia Gallerani (ca. 1473-1536). Young, beautiful and talented, especially in the areas of music and literature, she entered the Court of Milan and wrote poetry, unfortunately unknown today. She was the light of the Italian language. Her contemporaries compared her to famous women in antiquity, she was even called a new Sappho. All of this attracted Ludovico Sforza, the Duke of Milan, to Cecilia Gallerani.

The famous white ermine is actually a reference to Ludovico, who was decorated with the Neapolitan Order of the Ermine in 1488 by Ferdinand I, King of Naples, hence, he was also referred to as the White Ermine (Ermellino Bianco). Ludovico and Cecilia became lovers, but to fulfill some political responsibilities, he married Beatrice d’Este in January 1491. In May of that year, Cecilia gave birth to his son, Caesar. Constrained by his wife, he asked Cecilia to leave the Court and, richly endowed, married her off to Lodovico Carminati de Brambilla, Count Bergamini. It is believed that when she left she took the portrait with her. This is evidenced by a letter addressed to her by Isabella d’Este, the Marchioness of Mantua, in 1498, requesting that it be loaned.

After Cecilia’s death, the portrait disappeared for several centuries before it resurfaced in Poland in 1800. For years, it was erroneously considered to be the likeness of the so-called “Belle Ferronière”, a reputed mistress of King Francis I. This is evidenced by the inscription LA BELE FERONIERE / LEONARD D’AWINCI in the upper left corner alongside the artist’s surname, which is spelled in the Polish manner. However, considering Polish history in the 20th century, it is amazing that the painting actually survived. Tugged back-and-forth between Poland and Germany during the occupation of Poland, The Lady miraculously survived World War II (unlike Raphael’s famous Portrait of a Young Man). In 1939, after the Nazi invasion of Poland, an SS soldier’s footprint was found on it. Now, The Lady is safe in the Czartoryski Museum in Cracow.

The Lady with an Ermine has been heavily overpainted. Unfortunately, the original background was probably overlaid in the 17th century. Also, Cecilia’s dress below the ermine was retouched and a transparent veil worn by the woman was repainted to match the color of her hair. The result of this last retouching was to give the appearance that her hair reaches down and underneath her chin. An X-ray of this painting also reveals the presence of a door in the original background.

The Lady has another secret. French scientist Pascal Cotte spent three years on an investigation which in 2014 revealed that Leonardo actually painted the work not just in one, but in three clearly differentiated stages. His first version was a simple portrait, with no animal. In the second attempt, the painter included a small grey ermine. In the third and final stage, the animal was transformed into a large white ermine.