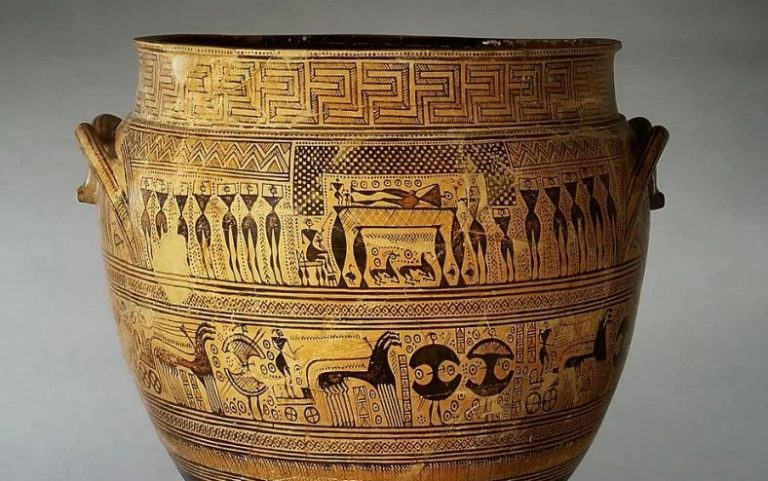 Despite lasting only a century (c. 1100-1000 BCE), the dark ages in Greece were an era of material poverty, cultural isolation, and artistic decline. People forgot or lost all use for reading, writing, and figurative art. Furthermore, the anthropological record shows signs of extreme famine and population decline throughout the period. Modern scholars often see the Greek dark ages as a time of stagnation, if not regression. However, the abstract designs that rose out of the period are surprisingly intricate, elegant, and beautiful.

In the mid-12th century BCE, the grand palaces and sprawling kingdoms that had defined life in the Mediterranean began to deteriorate. Perhaps traveling marauders crippled the region’s trade routes, plagues decreased their populations, or natural disasters wreaked havoc on their farmlands. No one really knows what catalyst caused the downfall of these once-powerful kingdoms. Only a few decades after the start of their decay, nearly all of Greece’s centralized governments had fallen apart. The same regions that only a few years prior had been rich with precious metals, artistic talent, and vast trade routes transformed into the small, warring tribes that characterized the Greek dark ages.

Earlier Greek artists had almost always used art as means of replicating the natural world, often portraying scenes, objects and people from the environments around them. Art in the dark ages completely departs from that tradition, marking a profound shift in both the artwork’s basic appearance and the fundamental purpose of the designs. The art that followed in the footsteps of dark age patterns continued the trend of extreme abstraction for generations, slowly increasing in complexity until it developed into the elaborate, sophisticated works that appeared at the end of the geometric era. This article will examine two of the designs that came out of the dark ages and then explore how these abstract designs evolved in the following two centuries.

This skyphos, or wine cup, is an early example of the abstract, linear designs that frequently characterized art in the dark ages. While people continued to appreciate beautiful, carefully decorated household items, either a lack of skill or a radical change in taste steered artists away from the intricate representational figures of octopi or swords that had adorned earlier pottery. Instead, artists embellished their works with precise geometric figures.

In order to create the smooth, consistent lines that define the circles on these skyphos, the painters must have used a new kind of drawing tool. The device probably consisted of a compass with several carefully spaced brushes attached along its length. This would allow an artist to quickly create exact replicas of an otherwise time-consuming nine-layered design. Abstract patterns in the eleventh century were often fairly simple; painters often left much of the pot’s surface completely bare, instead, focusing on just a few key design elements.

Likely used as part of a male burial, this amphora is another example of the new, abstract style from the Greek dark ages. While the ceramic is much larger than the skyphos above, the design elements are very similar. Estimated to have been created just at the tail end of the period, this pot also features a repeating design of nine concentric circles, although this time they rest on the amphora’s shoulder. The artist also likely used a small compass and brush tool to create the deliberate spacing and symmetry of the patterns. This amphora also features relatively sparse, large designs and remains dominated by blank, unpainted space, a trend that was relatively unusual before this period.

Discovered as part of the revolutionary 1967 unearthing of the Tomb of the Rich Lady, this amphora was found along with more than 80 other individual artifacts. One of the most profound discoveries in the tomb was a long-necked burial urn containing the remains of a woman, the rich lady for whom the tomb was named. The confirmation of female remains in the urn was remarkable because scholars had previously assumed that only men were buried in this way.

This amphora was created just a century after the protogeometric amphora discussed above. The overall design seems to both reference and expands upon the trends developed in the dark ages. While it addresses many of the same desires for abstract, symmetrical patterns, the art form has now significantly developed in complexity. The detailing on this amphora is smaller, more precise, and more technically advanced. The geometric patterns are tightly interwoven, and the relatively little area is left blank. In addition, every object on this amphora remains abstract, with no clear representations of the natural world. Over the century between this protogeometric amphora and this one, Greek artists have greatly expanded and enhanced the decorations that emerged during the dark ages.

This krater, or mixing jug, was probably a burial marker for a tomb. It was made in the middle of the geometric era, only a century after the one above. The artist who painted this piece worked in a similar style and technique as the earlier amphora. The designs are small, precise and still reminiscent of the simple abstract work from the 11th century. There is very little blank space on this pot, and a common trend in the geometric era was to fill the space as tightly as possible. However, this artist incorporated a key element that makes this object especially important; it is an early example of the return of painted figurative art.

Two scenes decorate the front of the krater. The first shows people mourning the death of the man lying in the middle of the scene. The artist has pulled back the dead man’s cross-hatched burial shroud to fully display his body. The mourners who surround him have their hands on their heads, likely to show that they are pulling at their hair, a common sign of grief at the time. The second scene shows warriors holding shields and using chariots in some sort of battle. Since hourglass-shaped shields and chariots weren’t as common during the 8th century, the scene may be showcasing the exploits of the man’s ancestors rather than those of the man himself.

The Greek dark ages are often seen as a time of immense decline. People lost the centralized governments, elaborate metalworking, art, and architecture that had been the crowning achievements of their ancestors. In many ways, it was a time of immense hardship, with small tribes frequently warring with one another and farms that weren’t able to produce the food surpluses their ancestors had enjoyed. Despite all of this, the style of art that grew out of this era was precise, elegant, and innovative. Over time, once the dark ages had passed and people were gradually able to dedicate more time to the arts, they expanded and strengthened these dark age designs, leading to breathtakingly elaborate pottery that may never have existed without the dark period from which they grew.