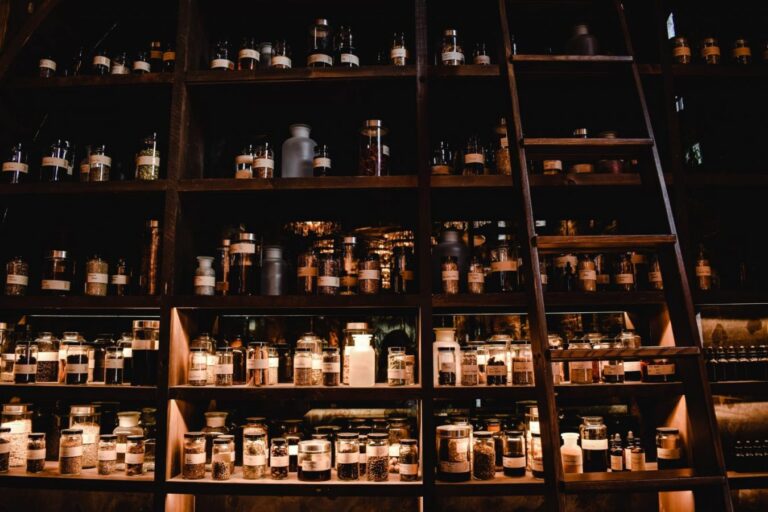 A pharmacy is a very weird kind of shop. It has your favorite skin creams and food supplements. They also carry medicines for the flu, blood pressure, and other illnesses. Pharmacies have been around for a long time. The concept of the pharmacy has remained the same but the look and the products have changed. Let’s look at a few examples.

The Santa Maria Novella pharmacy in Florence, Italy is probably the oldest pharmacy in the world still in operation. The Dominican monks, from the nearby Basilica of Santa Maria Novella, founded it in 1221. At first they grew herbs to make balms and medicines for their infirmary. Later the high quality of their products became widely known. Eventually, in the 17th century, the pharmacy opened its doors to the public.

The first medicinal remedy the monks made was “Seven Thieves Vinegar”. They made it from smelling salts dissolved in vinegar. Its name came from a story about a band of seven corpse robbers who used it to protect themselves from the plague.

The next specialty of the pharmacy was making “Armenian Paper”. The monks soaked paper incense in a liquid mixture of resins and oriental spices. As a result, it burned without a flame, scenting the air.

Another special product of the pharmacy was “Acqua Della Regina“. This was a fragrance specially designed for Catherine de Medici, Queen of France. Also, it was the first perfume to use alcohol as the base instead of the traditional vinegar or olive oil base.

The Pharmacy Museum is in a 1569 townhouse in Sibiu, Romania. This pharmacy did not keep its original look however. The wooden counters and shelves are from an 18th century Viennese Apoteka.

Most interesting is its back room dedicated to Homeopathy. The room honors Samuel Hahnemann, the father of homeopathy. There is a belief that he came up with many of the early ideas that lead to homeopathy in Sibiu. So, some of his original plans and instruments are on display.

The Svanapoteket is a pharmacy in Aalborg, Denmark.

It also has many odd remedies on display. These include Spanish fly (for aiding the libido), dried buck blood, whale oil, and a bottle of miracle tonic “Theriak.”

Theriak is one of the oldest medications in the history of mankind. It consists mainly of opium and wine with a variety of plants, animals (ie. snake meat), and mineral components. The “old pharmacists” developed Theriak as an antidote against poisoning, snake and spider bites, and scorpion stings. Nowadays, doctors still prescribe Theriak in rare cases in Europe for pain and other diseases.

Museum of the History of Lithuanian Medicine and Pharmacy

Lithuania’s Museum in Kaunas was first established in 1936 by Alfonsas Kaikaris, a professor of pharmacy.

Kaikaris’ personal collection of pharmaceutical props provided the basis of the museum’s collection. Afterward, the contributions from the Lithuanian Pharmacists’ Union expanded it. The museum holds an amazing collection of medical instruments and tools. It also has a relocated pharmacist shopfront and fittings as well as an early-20th-century dentist’s studio.

There are many traditional medications on display here. For example, it has “Erektosan,” an early Lithuanian herbal version of Viagra. Besides that, there are love potions, like “Venus Hair Potion” and “Caput Mortuum”. “Caput Mortuum” is a medieval male vitality booster and epilepsy treatment made of human remains.

Museum of Pharmacy in Cluj-Napoca

The first pharmacy in Cluj-Napoca opened its doors in 1573.

The museum has a large collection of preserved samples of substances apothecaries used to treat illnesses hundreds of years ago. Therefore, there are little notes that explain the purposes of each of these substances.

For example, one famous substance was “mummy dust”. It is a natural pitch from the Dead Sea area. It was a must-have for all European pharmacies from the 12th to 19th century. At the time people believed that it prolonged life and cured all diseases

Furthermore, the museum also preserves a small underground space where the head apothecary and his apprentice prepared most healing recipes with extreme secrecy.

The Golden Eagle Pharmacy Museum is located in Budapest, Hungary. It began as a private collection of pharmaceutical oddities and later became a museum in 1948.

One of the most interesting items in this museum is a bottle of Ambra Grisea Malac (Sperm Whale vomit). It was for use on “Lean, thin, emaciated persons who take cold easily” and those who “with great sadness, sit for days weeping.”

The next thing worth looking for is the box of “mumia” or mummy powder. The powder is made of ground-up mummies and it was either eaten or applied as a salve. The idea of using mummies as medicine came from an error in translation. When the Arabs invaded Egypt they believed that Egyptians prepared the dead with bitumen. Bitumen is a substance the Arabs were using as a medicine, calling it “mumia”. Eventually, the mummies got their name and special medical value from this misunderstanding. This later led to the mass exploitation of Egyptian mummies and even to mass production of them.

Probably the artsiest pharmacy on this list is the Esteve Pharmacy in Llívia, Spain. It was established in the 15th century.

Most noteworthy is the pharmacy’s large collection of albarellos. Albarellos are a type of painted pottery, sealed with parchment or leather. They were for keeping remedies in. Moreover, it has rare blue albarellos that include painted labels of the drugs they contained.

The museum also features a gaudy Baroque cupboard. The contrast between the museum and modern pharmacies is striking.

Croatian Museum of Medicine and Pharmacy

The Museum in Zagreb, Croatia is a more recently formed museum. Despite that, it has a marvelous collection of old surgical accessories, medicines, and books.

There are many old remedies to see here. For example, ampules of strychnine and arsenic, and bottles from the famous Elsa-fluid. Besides that, there are also old medical props, like blue Henry.

The blue Henry was a cobalt blue bottle with two silver plugs on each side. Before the cause of tuberculosis was discovered, the blue Henry was used as a sputum bottle. It is the perfect size to fit into a pocket and is easy to clean up.

Another interesting remedy is the magic wand from Bosnia. It is made of a wooden stick with the bark peeled off to make it square. A quote from the Qur’an in Arabic script is written on the flat sides. If someone had problems with pain they were to tap the stick on the spot that hurt and the pain would go away. Similar magic wands were also used for expelling the devil.