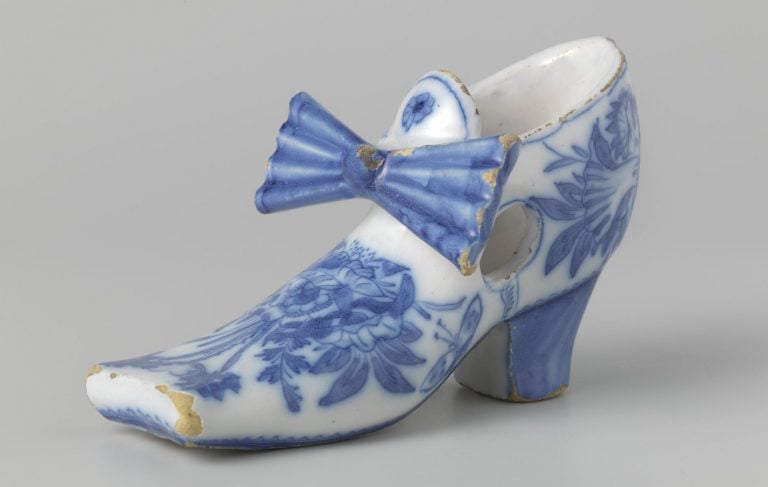 When we think of the Netherlands, a few characteristic things come to mind: tulips, windmills, orange, cheese and painted clogs to name but a few. However, we think there is a nobler Dutch craft that we ought to mention. Come with us on a journey into the blue and white world of Dutch Delftware.

The Time and the Place

Delft is a Dutch city wedged in between Rotterdam and The Hague, about one hour’s drive south of Amsterdam. It numbers approximately 103,000 people and its centre is an unspoiled, pretty grid of miniature bridges and canals. A strip of upright trees line the streets on one side, juxtaposing old, crooked brick houses on the other.

Nowadays the shops and the city market of Delft are flooded with goods that come in all shapes and sizes. Whatever the tourists want, they can get, in the distinguishable blue and white style. Yet, to find a characteristic memento of any value, they should direct their search to the one factory still standing. Since 1653, Koninklijke Porceleyne Fles, known as Royal Delft, is the only establishment out of 33 historical workshops, still manufacturing Delftware. Alternatively, for connoisseurs and collectors, there’s the antique market where exquisite 400 year old Delftware can be found. As excellent as it is expensive.

Anyway, we should now travel back in time, to when the production of this well distinguished earthenware began. All the way back to the 16th century.

The Golden Age in Delft

This famous period known as the Dutch Golden Age is placed between the late 1500s and the end of the 1600s. During this time, Dutch science and art were acclaimed worldwide. To mention just a couple of venerable names, both Rembrandt van Rijn and Johannes Vermeer lived and worked during the Golden Age. The development of the country into a big colonial power was exponential. With more demand, the production of all sorts of Dutch goods expanded. Delft became the European hot spot for pottery during the 1500s and retained its primacy for centuries.

Delftware was styled after Asian porcelain right from the very beginning of its existence. As material, porcelain had been incredibly popular in Europe since the 1500s. It was imported mostly from China. Indeed, to state the obvious, that’s why it’s also known as “china”. Unfortunately for the Dutch, some of the components used to create such pure “whiteness” and translucency were not available at that time, outside of the Asian continent. To remedy this hitch, the Dutch master potters tin-glazed whatever they made, to achieve a milky opacity resembling that of porcelain. The finishing touch was to varnish with a blue tint a great number of objects and decorative tiles. This too was borrowed from Oriental pre-existing pottery.

Not Only White and Blue

Delft ceramic masters often designed their products using the shapes and patterns from Chinese porcelain. Nevertheless, they infused their creations with a “touch of Dutch”. They experimented with the creation of original scenes, inspired by the landscape of their own country. Hence we find windmills, bucolic scenes, and the local fauna and flora.

Although the most recognizable style is blue and white, the potters also tried out more fickle pigmentations, such as red, orange and yellow. We must remember that ceramics go through several stages of preparation, baking and decoration. Keeping that in mind, we must also factor in the basic instruments that the crafts people had at their disposal during this time. Certainly more basic than a modern, electric oven! Thus we can only marvel at the polychromatic, wondrous creations they achieved, if you are into plates.

The End of the Delftware Era

Before production declined, and our beloved blue and white style went out of fashion, the Dutch exported their fine products all over the world. They successfully dethroned the Asian countries and gained the monopoly over earthenware. According to historians, over 800 million tiles were manufactured between the 16th and the 18th centuries. No wonder then that they were used in all manner of things, to adorn all sorts of objects… like toilets. After all, it was a declaration of wealth. The more blue and white the house, the more prestigious the host.

Many Dutch homes are still fitted with authentic Delftware tiles. From ordinary abodes to grand dwellings, such as the Rosenborg Castle in Copenhagen. You might think that they simply had way too many tiles on their hands. Conversely, I imagine, for example, that scanning all of those depicted scenes was quite entertaining for the guests at the Rosenborg Castle, during the 1700s. Like an ancestor of the graphic novel, so to speak, but with exponentially higher artistic value, to be sure.