Chocolate in Painting for a Cozy Evening 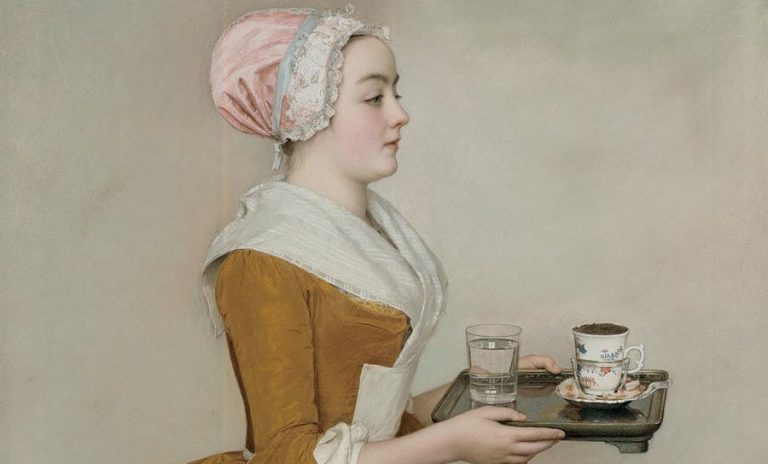 Every December I crave a good old hot chocolate and a cozy evening under a blanket. We present to you a short story about this sweet beverage with a rather bitter history… Hot chocolate in painting, everybody!

Chocolate’s history began 4,000 years ago in Mesoamerica. The first civilizations of Latin America turned cacao beans into a beverage used in rituals or as medicine.

The Gift for Strangers

For Maya peoples, chocolate meant “food of the gods”, and although all social classes of ancient Maya civilization could drink it, it was mostly reserved for the priests and the elite of their society. Therefore, when Columbus arrived in 1502 on Guanaja island on his fourth voyage, he was offered cocoa (cacao) beans. Little did they know what was about to happen to them from the hands of those strangers. In the 16th century, the Spaniards colonized the Mesoamerican region belonging to the Maya peoples and destroyed their cultural heritage along with screen fold books with recorded history and knowledge of the Maya civilization.

Fashion for the Kings

Columbus’ contemporaries were rather wary of the bitter taste of cocoa. Due to the colonial expansion of the Spaniards and Portuguese, and later the Dutch, chocolate reached continental Europe. It was first introduced to the Spanish court where mixed with sugar, honey, and vanilla, made the drink fashionable for aristocratic families, though the Spanish kept it secret for a while from the rest of Europe. Yet, when something becomes popular it is bound to be documented; hot chocolate showed up in a painting for the first time in the 17th century. Here we can see Infanta Maria Josefa of Spain, daughter of the Spanish King Charles III, portrayed with her two favorite things: her puppy, and a cup of hot chocolate.

As it’s a powerful and energetic drink, hot chocolate quickly became a typical breakfast for aristocrats. Accompanied by a glass of water and a sweet pastry, it provided a positive boost for a tiring day of socializing and networking.

The morning chocolate routine usually began in bed, as Pietro Longhi‘s portrayal of Venetian high society shows. Yet this anonymous work proves that one could drink chocolate anywhere, even in a bath. What can be more indulgent than that?

From Painting to Advertising

Jean-Etienne Liotard, a Swiss painter, created an entire series dedicated to ladies drinking or serving hot chocolate. For example, the painting below, showing a maid serving a cup of hot chocolate and a glass of water, was considered a masterpiece by Liotard’s contemporaries and it inspired many copyists to make replicas. Later, when hot chocolate became even more popular, the image inspired advertisements on Droste’s (a Dutch chocolate manufacturer) cocoa tins.

Fashion for the Fashionable

With the passage of time and the rise of trade, chocolate production sped up and further spread across Europe. Not only did the higher classes drink it, but the bourgeoisie could afford it as well.

Food for the Soldiers

The Industrial Revolution further industrialized the production of chocolate. As a result, during World War I, food rations for soldiers contained chocolate bars for breakfast.