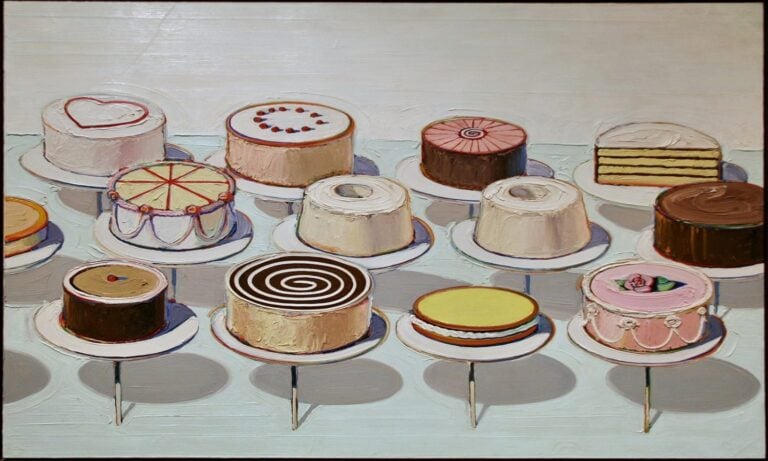 For centuries we have seen artists copying others’ work in order to learn how to draw correctly or to find out what style they want to follow. But what if in the 21st-century copying was used for another reason? What if photographs copied paintings, turning what is imaginary into something real? And what if those photographs had a hidden meaning in them? To learn more about that you will need to dive into Wayne Thiebaud’s sweet paintings and Sharon Core’s take on them.

Wayne Thiebaud (born in 1920) is an American painter mostly known for his paintings of sweets that leave our mouth watering. There are cakes, loads of them, ice creams, and bubblegum. The pastel tones are also a typical characteristic of his works which are usually painted with backgrounds in cold colours which contrast with, for example, red, pink and orange tints of the main subject.

Besides that, Thiebaud also paints other things like lipsticks, teddy bears and even San Francisco street views. Because he paints banal objects, he is sometimes incorrectly associated with Pop Art but on the contrary to other Pop artists, Thiebaud works from life and not from media images. Another difference is that his brushstrokes are notably loose, opposite to the mechanical reproduction of the hard-edge paintings from Pop artists like Andy Warhol and James Rosenquist.

Most of these works show more than one sweet in each painting and we can always see Thiebaud’s artistic traits: he chooses to eliminate the details that don’t matter and at the same time he includes bits of his personal experience and some optical nuances.

Thiebaud moved to California where he became interested in stage design and lighting and we can see how big of an impact it had on his paintings. The lighting is always strong and well fitted to the objects always represented with their corresponding correctly executed shadows. And in most of the works, the cakes or ice creams seem to be placed on some kind of a stage which highlights their importance.

We can all agree that these works make us crave sweets, right? And what if I tell you that some of these cakes, ice creams and pies were really made just a  couple of years ago?

Well, to explain I now have to introduce you to Sharon Core (born 1965), an American photographer who was awarded the George Sakier Memorial Prize for Excellence in Photography in 1998 at the Yale University School of Art.

Core works in series in which she recreates paintings, most of them are still lifes. And what is even more interesting is that she personally assembles all the elements she needs to take the picture in question.

For example, she has a series dedicated to Raphaelle Peale, an American painter that dedicated his work to still lifes full of flowers, fruits and animals. When Core recreated Peale’s paintings, she herself planted the flowers and fruits and then arranged them to look like they do in the paintings.

As you probably guessed by now, she has a series dedicated to Wayne Thiebaud.

In this case, she didn’t need to grow plants but instead, she made all the cakes, pies, ice creams and what not from scratch. She has training in both painting and pastry, so she just had to use her skills.

For most of the recreations Core just saw photos of the paintings rather than original works, which is interesting because in a way she was returning to the first idea that Thiebaud must have had when he pictured what he wanted to paint: that when we think of something, our thought is like a photograph that we then turn into something real.

The most interesting part of Core’s photography has to do with what Walter Benjamin called “aura”. The aura has to do with how a work of art was made. If it was made by hand, like a painting or a sculpture, it has an aura, because it has the touch of the artist’s hand. But if it was made via mechanical reproduction, as it happens with photography, it does not have it.

But Sharon Core’s photography has a different type of aura because it does not take her only a few seconds or minutes to click the button on her camera. She has to wait hours for the cake and pies to be ready and to look exactly like in Thiebaud’s paintings, and in the case of Peale’s paintings, she has to wait months for the flowers and fruits to grow until she can use them. So the labour and time that Core invests in the photos most probably exceed the time Thiebaud took to paint.

I think that we all can agree that Wayne Thiebaud most probably did not bake the cakes he painted. But, as I already said, Sharon Core did really bake what she photographed. This way we can also assume that she is making a subtle critique of the privileges that male artists have since they rarely have to make household chores…

We can say that Core’s photographs really do alter the depicted objects’ status. With a painting, we never know if the objects we see did really exist or were just part of the painters’ imagination. But in a photograph, we know that what is shown is real. Core’s photographs literalize Thiebaud’s paintings and bring them to our world of reality.

Remember – don’t play with your food! Unless it’s art…