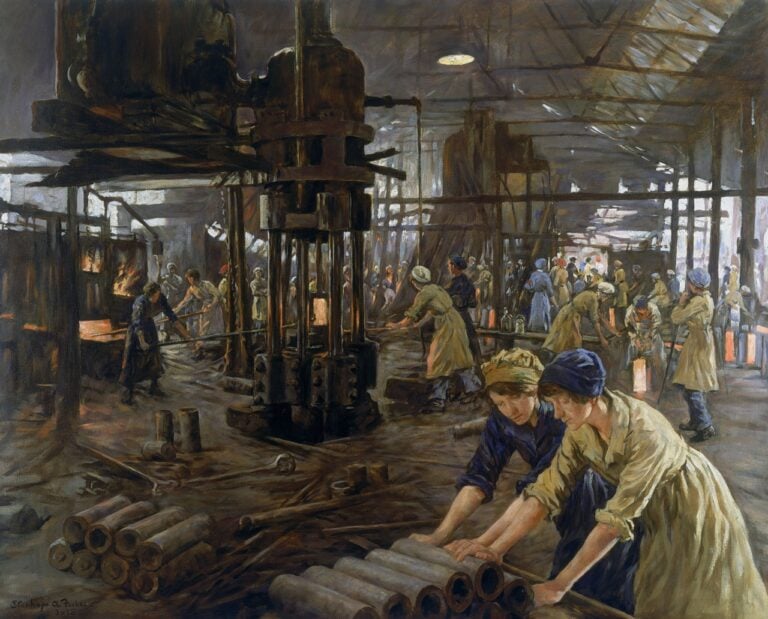 Even though depictions of rural labor remained frequent, industry, as an important part of the reality and people’s life, became a more and more explored topic.

In 1881 Ernst Josephson traveled to Spain accompanied by the painters Anders Zorn, Hugo Birger, and Christian Skredsvig. Their aim was to see the works of the great Spanish masters in the museums and to depict Spanish peasant life. While in Triana, the area of Seville dominated by the Romani, Josephson was approached by a group of smiths who asked him if he could portray them standing outside their smithy.

To realistically represent this combined smithy and mechanical workshop, the Industrial Revolution artist Eugène Buland used photographs. Representing all the details of the machinery wouldn’t be possible otherwise. For example, the foreman depicted here is using a drill to make a cogwheel. It is a vital component that keeps the entire modern machinery rolling.

The French defeat in the war with Germany in 1871 was blamed partly on the slow industrialization of France. Therefore, huge efforts were made to modernize the country. It was a process that was also reflected in the painting with scenes from iron and steel mills, weapons factories and railroad track factories.

The machine age brought new clients to the art market. The factory owners could easily afford to buy artworks. They also wanted the world they created to be depicted by the artists.

In a number of paintings, Pehr Hilleström was engaged to depict the furnace-lit interiors of forges and foundries connected to the Swedish iron making manor estates of the late 18th century. In this picture, the scene is from the anchor forge at Söderfors, in the province of Uppland. During the early industrial period, the iron making estates of this region were of crucial importance to the economic life of Sweden. The painting shows a realistic scene of the forge, where the then world-famous anchors of Söderfors were being made – many of which were exported to England.

The owner of this specific ironwork, Adolf Ulrik Grill, commissioned the monumental interior of his anchor-forge in 1782. He is himself visible in the picture, as the well-dressed man to the right inviting a group of fancy visitors into the dark and dramatically lit room. The importance of this commission is underlined by its monumental size – the width of the canvas measures nearly two meters.

Historians have noted the extreme truthfulness in all details in Hilleström’s industrial scenes. That is to say, through this quality, his paintings are invaluable sources for our knowledge of early industrial history.

Commissioned by John Baker & Co, this famous oil painting, entitled The Munitions Girls, by another one of Industrial Revolution artists Alexander Stanhope Forbes (1857-1947), shows women working at Kilnhurst Steelworks during the First World War. Like many other steelworks during the war, John Baker & Co’s Kilnhurst site was converted to make shells and ammunition. As men volunteered or were conscripted to fight in the British Army, women, as a result, became the main workforce in industry and farming. Munitions workers could often be picked out in a crowd because of the distinctive yellow coloring of their hair and skin. This was caused by the sulfur used in production. Consequently, they were nicknamed “canaries”.

The distinctive ritual of Islamic prayer, known as namaz (in Urdu) or salah (in Arabic) has captivated the imagination of many Orientalist painters.