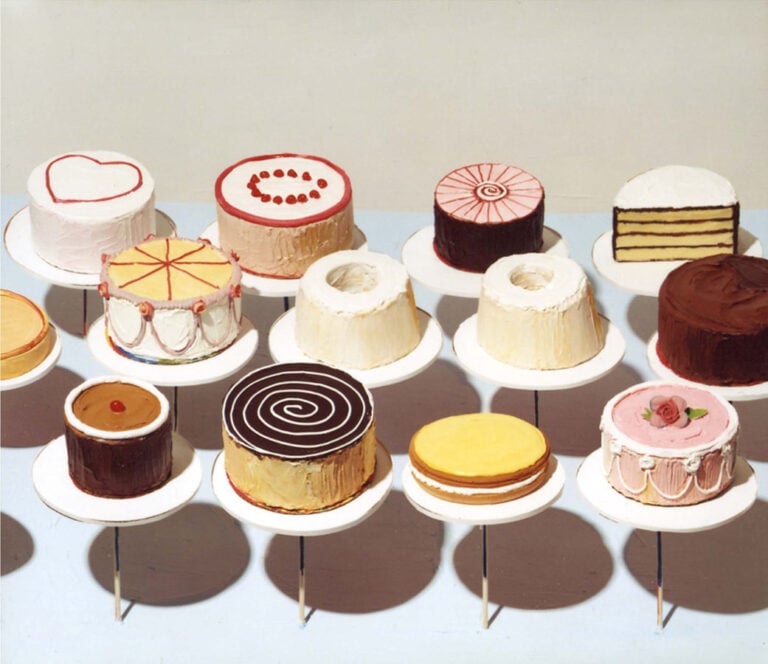 I’ve decided – I’m going on a diet. Another one. And this time I’m going to stick to it, honestly!
In order to survive, because I have a terrible sweet tooth, I’ve prepared something I can hold on to when I feel I need a sweet snack. Or two.
If you’re in a similar situation, have a look on this page. Hopefully, it won’t make you crave sweets even more…

Andy Warhol had a sweet tooth, too. He admitted once: “all I ever really want is sugar”. He had his favorite Serendipity 3 café where he held parties and meetings, and this colourful dessert most probably comes from there. You can find it at 225 East 60th Street, between Second and Third avenues in New York City.

Oh, these doughnuts are so tempting… Who could possibly resist this Megarealistic painting? And to make the situation worse, Sparnaay, a contemporary Dutch painter, specializes in the Hyperrealistic depictions of food. If you ever feel hungry, look up his paintings of burgers, fried eggs or profiteroles… It’s a shame they’re not edible.

A small reproduction of a very short moment of weakness

Having seen those doughnuts I need a short break…
(This painting is so consoling, I feel comforted to see that snacking on sweets in secret is a centuries-old problem.)

Wayne Thiebaud is an American painter most famous for depictions of ordinary objects who in the early 1960s centered his painting around food. This choice of popular products as subjects for painting and use of bright colours brought him to be associated with Pop Art.
Some interpreted his works as expressing critique of American consumerism but Thiebaud claimed that they were born out of his nostalgia for old times rather than contempt.

A table full of desserts

To polish off I’m giving you a real feast. You can find here all kinds of fruit, alcohol, a pie and even some bread. Jan Davidsz. de Heem knew how to party. He was one of the most famous Flemish and Dutch (he lived both in Utrecht and Antwerp) still-life painters, and his specialization was ‘pronkstillevens’, that is very sumptuous still lifes.
The only thing missing in the painting is a person to eat it all and then play the lute.