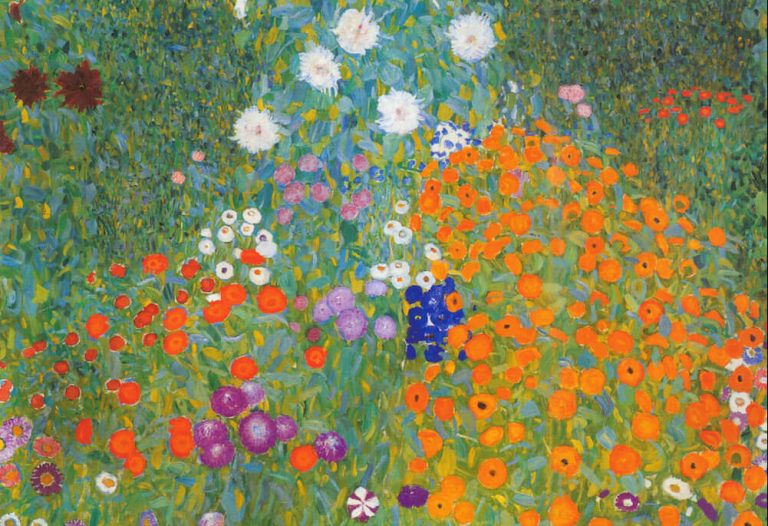 When you think of Gustav Klimt, what’s the first thing that comes to mind? If you’re like most people, you probably thought of his portraits. You might not realize that he also painted many other things. In fact, he made quite many landscapes throughout his career, particularly of Lake Attersee in Austria, where he spent every summer.

This might come as a surprise at first, but once you see one of Klimt’s landscapes, the connection with his better-known works will be clear. His most recognizable stylistic features show up as clearly in his landscapes as in his most famous works. Imagine taking the figures out of his famous portraits. What you would see behind them would be very similar to many of Klimt’s landscapes. Let’s take a look.

Klimt loved patterns, particularly those he saw in Byzantine icons and mosaics. He included intricate patterns in many of his well-known works, often in clothing and backgrounds. In Klimt’s landscape paintings like Forest of Beech Trees and Birch Forest, the leaves on the forest floors create tiny little patterns. They remind me of paintings by Georges Seurat, who worked in France a little before Klimt’s time. Klimt loved all kinds of decoration, and he started his career making so-called “decorative paintings” for interior design.

Like many other modern artists around the turn of the 20th century, Klimt made his compositions progressively flatter throughout his career. The background is very shallow, so everything appears right in front of the viewer. In Klimt’s landscapes, you can see this most clearly in Farm Garden with Sunflowers, where all the flowers seem like they’re right in front of you. In other works, like Orchard with Roses and Rose Bushes under Trees, the path gives a hint of background, but the flowers seem to push all the way forward anyway.

Naturalism and Abstraction in the Same Painting

To me, this is the most obvious element of Klimt’s style. He loved to contrast naturalistic forms and highly stylized ones by placing them side-by-side. For example, you can see this in his famous Portrait of Adele Bloch-Bauer, sometimes called the Lady in Gold. Her face, neck, and arms are very naturalistic, but the rest of her portrait isn’t at all. You can see the same idea in Klimt’s landscapes like Birch Forest. In that painting, the texture of the trees’ bark appears exactly as it would appear in real life, but it’s juxtaposed with a much more abstracted interpretation of the green and orange foliage in the scene. The effect is very unique and easily identifiable as Klimt.

Klimt liked to ignore traditional rules about how to make a balanced composition. A good example is his landscape called The Park. The leafy treetops take up at least the upper eighty percent of the composition, while the actual park fits into the tiny sliver of canvas left at the bottom. It’s an effective strategy that really gives you the sense of being in an overgrown forest. In his better-known works, such as The Kiss, Klimt placed his figures at unusual angles to create other types of inventive compositions.

Klimt loved gold. Many people believe it’s because his father was a jeweler. Most of his famous works come from his so-called “Gold Period” when he frequently used real gold leaf in paintings. One example would be his Beethoven Frieze. He also painted many landscapes around the same time. Most of Klimt’s landscapes don’t actually include gold leaf (besides Tree of Life). However, he certainly knew how to include little hints of bright yellows and oranges to liven up his canvases in a similar way.