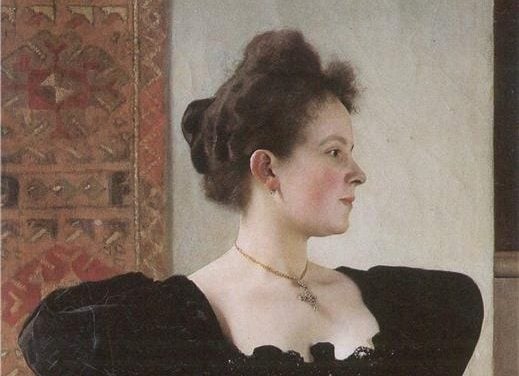 Some of Klimt’s portraits have already gained the status of “iconic”, for example, his soaked in gold portrait of Adele Bloch-Bauer. Yet, before Klimt became the head of the Secession movement in Vienna in 1897, he painted in a very conventional style, as requested by his commissioners. Most of the works below are Klimt’s unknown portraits (or at least much less known). Would you ever tell they were his?

In the year that this painting was completed, 1891, a union between Klimt and Flöge families was made. Gustav’s brother Ernst married Emilie’s sister Helene. Emilie was then 17 years old, Gustav was 12 years older and it was their first meeting that resulted later in a life-long companionship. Three years later he painted her again, this time in a specific location (so atypical!). Look at his brushwork, it’s so Impressionistic, so different from anything we know by Klimt. This difference can be explained by the commission: the work was intended for the Burgtheater in Vienna rather than a family salon.

Marie Breunig was born in humble circumstances but married a successful businessman. That allowed her to frequent the Viennese society. She befriended the Flöge sisters and became a client of their fashion salon. Although this portrait has been known to Klimt scholars, it is inaccessible to view since the owners want to maintain their anonymity. What’s consoling, it’s that the portrait is the only one left in the original family ownership and still hangs in its intended position.

3. Portrait of a Lady

The painting had been inventoried as a “portrait of an unknown woman” but some interpret the lady as Frau Heymann since the museum purchased the painting from the collector Dr. Augustus Heymann’s bequest. If you look at the background of the portrait, you’ll notice simple and quite stereotypical floral patterns which presage the stylistic change that Secessionist “Ver Sacrum” which was introduced three years later.

4. Portrait of a Sitting Young Girl

Despite the size of the reproduction, this portrait is in reality very small: 14×9 cm and is painted on wood rather than canvas. The composition is reminiscent of the portrait of Marie (above). The unknown girl is wearing a fashionable dress and she’s looking straight at the viewer. Any ideas who she might be?

Helene was only a couple of months old when her father Ernst, Gustav’s brother, died in 1892. Gustav took the guardianship of the girl and promised her mother to help. The girl was the pride of the family and when she grew up, she joined the Flöge fashion house, helping with administration, bookkeeping and advising the clients. This portrait is dominated by the clear-cut bob hairstyle of the girl, which then is complemented by Klimt’s impressionistic rendering of her white blouse in just a few strokes.