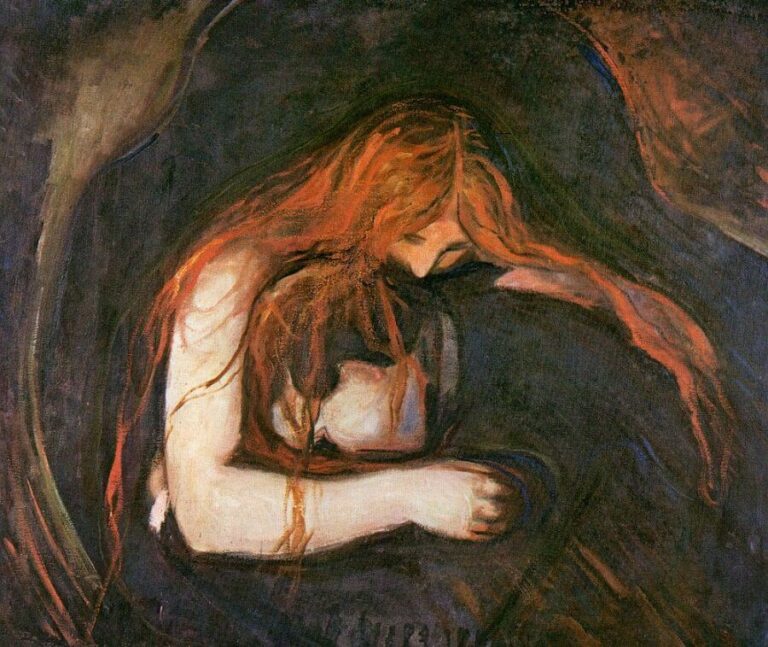 Vampires are one of the most famous mythical creatures in history. The origins of their legend date back to ancient civilizations. Some ancient religions and mythologies, such as ancient Greek mythology, believed in the existence of blood-sucking demons with a beastly appearance who looked nothing like humans. The legend as we know it today originated right after medieval times, reaching its peak during the Victorian Era when Romanticism was flourishing. Today, we present to you 5 vampire paintings in art, along with their stories. Some are creepy enough to give you serious chills!

Everyone is familiar with Dracula. The name originated from Vlad Tepes or Vlad Draculia. He was the Voivode (governor) of Wallachia three times from 1448 – 1476, the year of his death. As a child, he was captured and held hostage by the Ottomans along with his brother, Radu. He witnessed monstrous hostilities and atrocities as he took part in the Ottoman and Hungarian wars. He returned to Hungary and started his first reign in 1448. Vlad Tepes became famous for the way he tortured his enemies- he impaled enemies outside his castle. He got the nickname Draculia because of the blood that filled his yards.

This portrait, whose artist is unknown, depicts the Impaler during his days of glory. It is one of the most famous vampire paintings. Vlad Tepes’ history inspired Bram Stoker to write his famous novel, Dracula. The novel Dracula became much more famous than Tepes himself and was an enormous inspiration for horror literature and cinema.

Not everyone is familiar with the history of Elizabeth Bathory. She is an inspiration for horror video games and cinema, as well as the gothic culture in general. However, she is a rather sophisticated icon, not known to many like Dracula.

The real story is that Elizabeth Bathory was a countess in Hungary. She came from a noble family (born in 1560) and married a nobleman of a slightly lower social rank than her. While her husband went to continuous wars with the Ottomans and other state enemies of the time, Bathory remained at her castle. For no known reason, she started torturing her maids, especially the young virgins. She drained their blood, tore their bodies apart, and kept them in dungeons. Between the years 1602-1604, rumors started spreading throughout the kingdom about her despicable actions.

Even though István Magyari, the minister, formed an official accusation against her, it was not until 1610 that Bathory was brought to court. There were many witnesses who testified against her; however, the servants did so under torture by the authorities so it is not safe to consider their testimonies accurate. Nevertheless, the number of Bathory’s victims exceeded 300, proving her indisputable guilt. Bathory was sentenced to life imprisonment in her house. She passed away four years later.

Elizabeth Bathory became part of the national folklore. Legend has it that she bathed every day in the blood of the young virgins she murdered because she believed she would stay forever young. This version of the story was printed for the first time in 1729 in László Turóczi’s Tragica Historia. Since it is not based on facts, it is considered to be a rumor. This portrait of hers is a copy of the original one from 1585, which was lost decades ago.

Moving on from true stories, Carmilla is a fictional character. It is the name of Joseph Sheridan Le Fanu’s gothic novel from 1872. The plot follows a young woman, Laura, who becomes the object of desire for a female vampire named Carmilla. The name is an anagram of the vampire’s real name, Mircalla, Countess of Karnstein. It is a prototype of lesbian vampire love, as Carmilla both loved and lusted after her victim. The story was originally published as part of the series The Dark Blue.

Carmilla is a form of early feminist expression. Even though it takes place in the Victorian Era when women were mere objects of tenderness and pleasure to men, the female heroes in the novel are superior to males, who are helpless and kind of pathetic. Moreover, there is no sign of sexual objectification of lesbianism- Carmilla and Laura form a mental and emotional bond that has stayed away from the stereotypes.

Edvard Munch‘s painting is not a vampire painting per se as the artist did not intend to paint a vampire. It is actually a couple. A man in distress finds himself in the arms of his beloved partner for comfort. She kisses him on the back of his neck while he has surrendered into her hug. Some critics interpreted this painting as a depiction of when Munch visited prostitutes. Others thought that it was about the death of his sister.

The thought that the painting showed a vampire was a later addition to its already vague meaning. Perhaps it is her red long hair, the hidden faces, and dark background that give this impression. It remains enigmatic until today.

Une Semaine de Bonté ou Les Sept Éléments Capitaux is a novel series by Max Ernst. Drawing  inspiration from the movements of Dada and Surrealism, Ernst created these books by making collages of pictures from 19th and 20th century pulp books, encyclopedias, scientific journals, and natural history magazines. The overall result is a completely surrealistic narration of the seven days of the week, where each day is assigned to a deadly sin. There are five books in total.

This particular illustration belongs to Thursday, which was the day of blackness. This chapter has collaged illustrations that show men as birds. Therefore, it is not an actual vampire we see in the image but more of a man with big wings. Since the wings resemble a bat’s wings, we can interpret it as a vampire.

MOBA, or the Museum of Bad Art, is replete with almost anything that could be wished for in terms of the good, the bad, the very bad, the hilarious,...