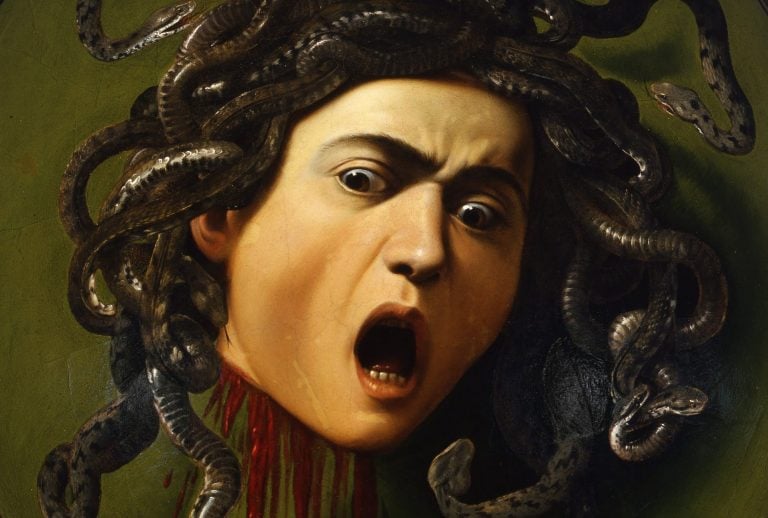 A Very Florentine Story: Perseus and the Head of Medusa by Benvenuto Cellini

Medusa was one of the scariest creatures that Greek mythology created. Her name in Ancient Greek means “guardian, protectress”. She was a monster, a Gorgon, generally described as a winged human female with living venomous snakes in place of hair. Her superpower was simple – gazers upon her face would turn to stone.

In a late version of the Medusa myth, related by the Roman poet Ovid, Medusa was originally a ravishingly beautiful maiden, “the jealous aspiration of many suitors,” but because Poseidon had raped her in Athena’s temple, the enraged Athena transformed Medusa’s beautiful hair to serpents and made her face so terrible to behold that the mere sight of it would turn onlookers to stone. In Ovid’s telling, Perseus describes Medusa’s punishment by Minerva (Athena) as just and well earned.

In most versions of the story, she was beheaded by the hero Perseus, who was sent to fetch her head by King Polydectes of Seriphus because Polydectes wanted to marry his mother. The gods were well aware of this, and Perseus got help. He received a mirrored shield from Athena, gold, winged sandals from Hermes, a sword from Hephaestus, and Hades’ helm of invisibility. Since Medusa was the only one of the three Gorgons who was mortal, Perseus was able to slay her while looking at the reflection from the mirrored shield he received from Athena. During that time, Medusa was pregnant by Poseidon. When Perseus beheaded her, Pegasus, a winged horse, and Chrysaor, a giant wielding a golden sword, sprang from her body.

Also in more modern art, the subject of Medusa’s head became quite popular. Here are the five most famous paintings depicting Medusa.

Caravaggio painted two versions of Medusa, the first in 1596 and the other around 1597. About the first version, the 17th-century poet Gaspare Murtola wrote:

Flee, for if your eyes are petrified in amazement, she will turn you to stone.

This work is privately owned, signed, and now known as Murtola.

The second version, shown here, is slightly bigger (60×55 cm) and is not signed though often dated 1597.

Peter Paul Rubens’ contemporaries saw in the Medusa more than a horrifying creature. It was interpreted both as a triumph of stoic reason over the foes of virtue and as the possibility of controlling passions and exercising stoical equanimity through implacable realism. The snakes were likely executed by a specialist, Frans Snyders, but the idea was Rubens’. Whilst the comportment of the two intertwined animals to the right was likely drawn from contemporary emblems, their zoologically accurate rendering is based on Rubens’ own close study of nature. For some examples, such as the winding snake in the right foreground, Rubens probably also used casts made from nature, which were particularly popular in northern Italy.

It’s hard to tell anything about this Medusa painting other than what you see. So maybe it’s a good time to say what Sigmund Freud in his Das Medusenhaupt (Medusa’s Head) thought of her. In Freud’s interpretation:

To decapitate = to castrate. The terror of Medusa is thus a terror of castration that is linked to the sight of something. Numerous analyses have made us familiar with the occasion for this: it occurs when a boy, who has hitherto been unwilling to believe the threat of castration, catches sight of the female genitals, probably those of an adult, surrounded by hair, and essentially those of his mother.

In this perspective, the “ravishingly beautiful” Medusa is the mother remembered in innocence; before the mythic truth of castration dawns on the subject. Classic Medusa, in contrast, is an Oedipal or libidinous symptom. Looking at the forbidden mother stiffens the subject in illicit desire and freezes him in terror of the Father’s retribution. I know, it’s complicated.

In 1782, Leonardo da Vinci’s biographer Luigi Lanzi discovered a depiction of Medusa’s head which he erroneously attributed to Leonardo, based on a description of Leonardo’s painting done by Giorgio Vasari. In the 20th century, Bernard Berenson and other leading critics argued against Leonardo’s authorship of the Uffizi painting. It is now believed to be a work of an anonymous Flemish painter, active ca. 1600.