Man, Woman or Both? Meet Akhenaten, the Only Androgynous Pharaoh 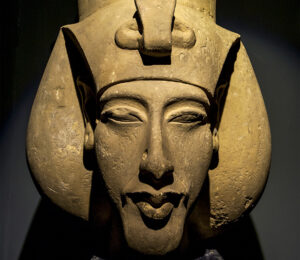 Painting of the Week: Judgement Scene from Book of the Dead of Hunefer

If you thought that ancient Egypt had always been only about a large pantheon of gods, solid and emotionless sculptures, and masculine pharaohs, have a look at this short episode from Egyptian history, when people looked like aliens and sunbeams had hands. We present to you today a history of Akhenaten (Echnaton), an Egyptian pharaoh, the 10th ruler of the 18th Dynasty who is known for his distinctive portrayals in art.

During the 17 years long reign of the pharaoh Amenhotep IV (circa 1352-1336 BCE), the political, social and religious orders in Egypt underwent a complete and drastic metamorphosis. For example, Amenhotep IV moved the capital away from Thebes to Amarna and established a new cult of Aten (literally the sun disc, an aspect of god’s Ra being) as the only one god, changing the religion from polytheism to monotheism.

Moreover, he took up a new name – Akhenaten, which means “pleasing to the Aten” – and made himself Aten’s son and the high priest, which was almost synonymous with the god. Since the pantheon of gods had disappeared, the hosts of artists, priests and temples were completely unnecessary. It was the royal family who took sole control over religion, art and the entire society.

This change largely influenced the visual style of representation. The main subject of art was Aten and the royal family. For the first time in history, pharaoh was depicted in domestic environment, playing with his children or expressing his love. Akhenaten, who wanted  to distinguish himself from the other pharaohs, forgot about convention depicting royal family in an idealized way and turned to exaggerated naturalism. Elongated heads, thick lips and heavy-lidded eyes were the main characteristics of the new style. The sunbeams terminating in hands are the symbols of Aten who blesses the happy royal family.

Also for the first time in the history of Ancient Egypt, women were equal to men because Aten and Akhenaten were called father and mother of all. Akhenaten was the sole symbol of both women and men. Therefore, he was usually depicted with breasts and feminine hips, in order to symbolize life and fertility.

However, after Akhenaten’s death everything came back to the old order. His son, Tutankhamun, restored polytheism and moved the capital back to Thebes.