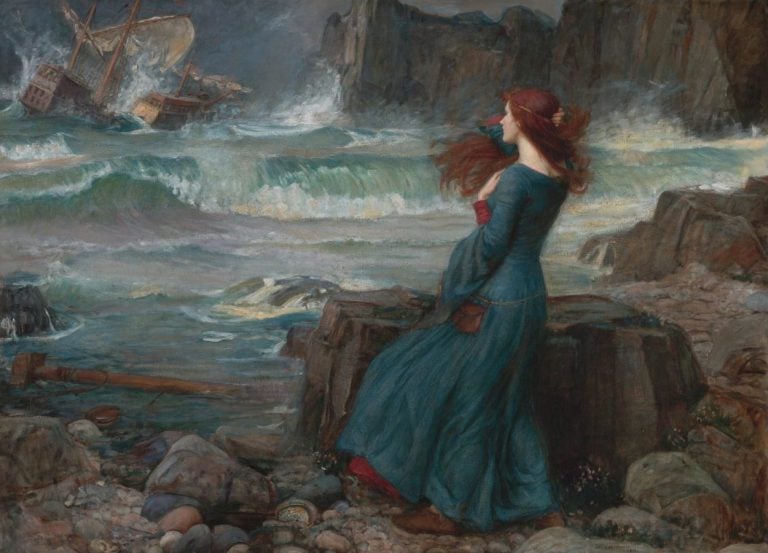 Painting of the Week: John William Waterhouse, The Lady of Shallot

Miranda, from William Shakespeare’s The Tempest is the subject of a painting by John William Waterhouse. She has been detained on an island, together with her father, Prospero, for almost twelve years. This happened as a result of having been exiled from Milan by Prospero’s power-seeking brother, Antonio.

John William Waterhouse (1849–1917) was an English painter who embraced the Pre-Raphaelite Brotherhood’s style and subject matter. Accordingly, many of his artworks were inspired by ancient Greek mythology, Arthurian legends, and literature.

A sense of patriotism, nurtured through the poetry of Tennyson and the work of Shakespeare, stimulated many British artists, including Waterhouse. Hence they wanted to refer their work to the classical literature of Britain’s past. This painting, created in 1916 is an example of this, being a representation of The Tempest by William Shakespeare. Significantly, it became one of Waterhouse’s most recognized works and the most popular illustration of the play.

Waterhouse had deserted classical myths as topics in favour of medieval and Renaissance narratives. In particular, he tended to focus ladies who were experiencing a revelation. In the play Miranda is the only female character to appear on stage. Despite this, she is depicted throughout the drama with concern and intensity. Waterhouse has chosen the most tragic and dramatic moment of the drama – the shipwreck.

In the painting we can’t see Miranda’s face, yet we can feel her sorrow. Specifically, she holds her hand to her heart to express the pain and despair she is suffering at the loss of life. At the same time she declaims:

“If by your art, my dearest father, you have

Put the wild waters in this roar, allay them.

The sky, it seems, would pour down stinking pitch,

But that the sea, mounting to th’ welkin’s cheek,

Dashes the fire out. Oh! I have suffered

With those that I saw suffer: a brave vessel,

Who had, no doubt, some noble creatures in her,

Dash’d all to pieces. Oh! The cry did knock

Against my very heart. Poor souls, they perish’d.

Had I been any god of power, I would

Have sunk the sea within the earth, or e’er

It should the good ship so have swallow’d and (…)”

Meanwhile the depiction of the storm produces a frightening scene in the background. The picture has been painted in cold tones, underlining the sense of loss and numbness. In addition, the ship, sliced in two by powerful waves, leads our eyes towards the threatening rocks.

An earlier version of Miranda, painted by Waterhouse in 1875, shows a very conventional and delicate atmosphere. Despite this, it illustrates the exquisite and confidence skill of the artist.

Marta De La Iglesia Ramos is an undergraduate English philology student from Spain with a particular interest in Romanticism and Pre-Raphaelite era. Other interests include reading, writing and poetry. You can find out more about Marta at her Instagram.