Thérèse Schwartze. The Painter of the Amsterdam’s Elite

Thérèse Schwartze (1851 – 1918) grew up in an artistic family. Her father Johann Georg Schwartze was a painter and he introduced his daughter to the profession. 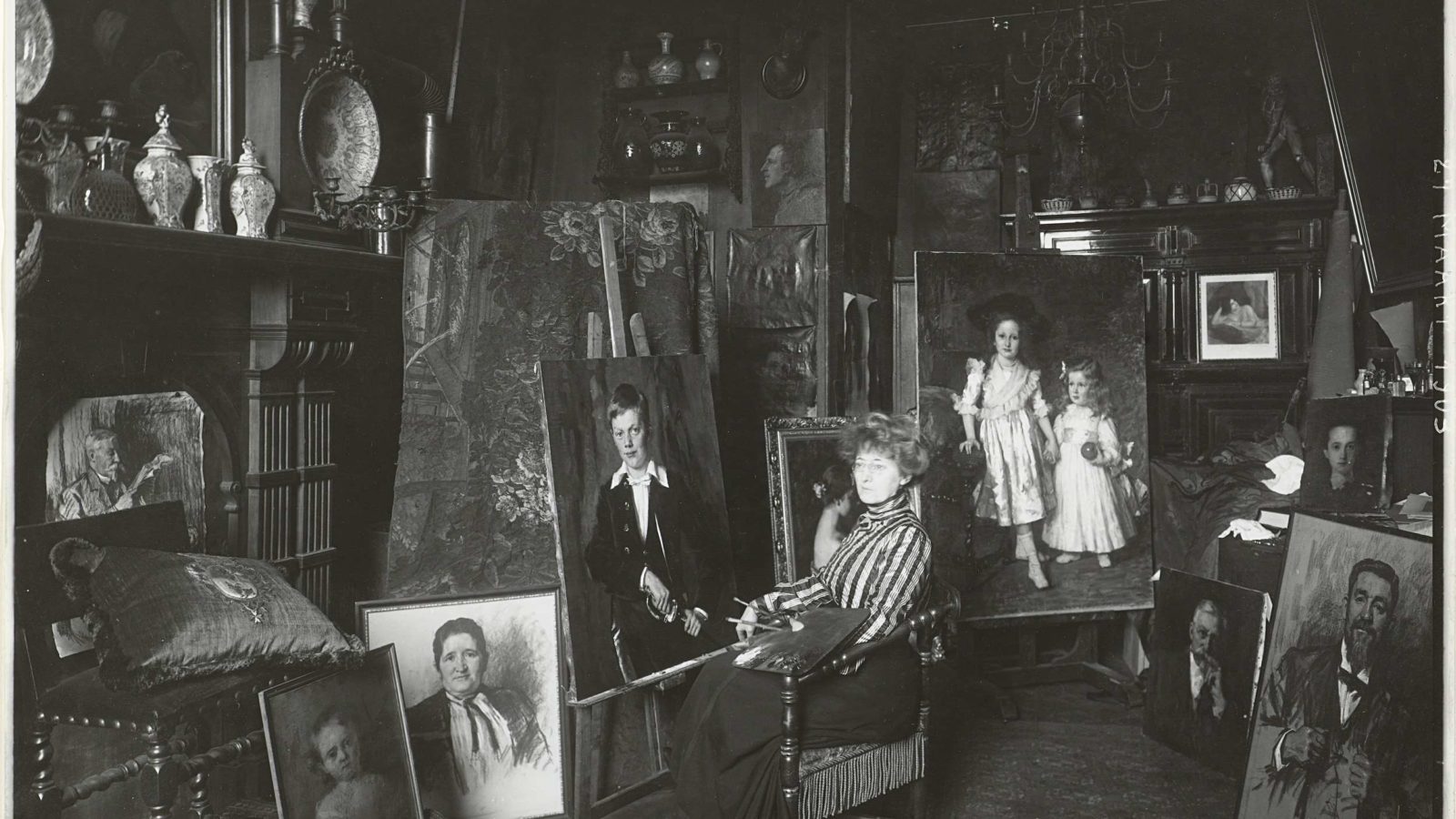 The painter Thérèse Schwartze in her studio, 1903, Rijksmuseum[/caption]

Apprentice of an Ambitious Father

At that time, painting training for girls was seen as a part of a cultured upbringing rather than a profession: earning money was the job of the man. But the ambitious father didn't care about the conventions. He trained his daughter in painting and drawing from a very young age and wanted Thérèse to become his successor. Thérèse started her professional career at the age of 16, working in the studio of her father which she took over after Johann's death in 1874. [caption id="attachment_19666" align="aligncenter" width="804"] 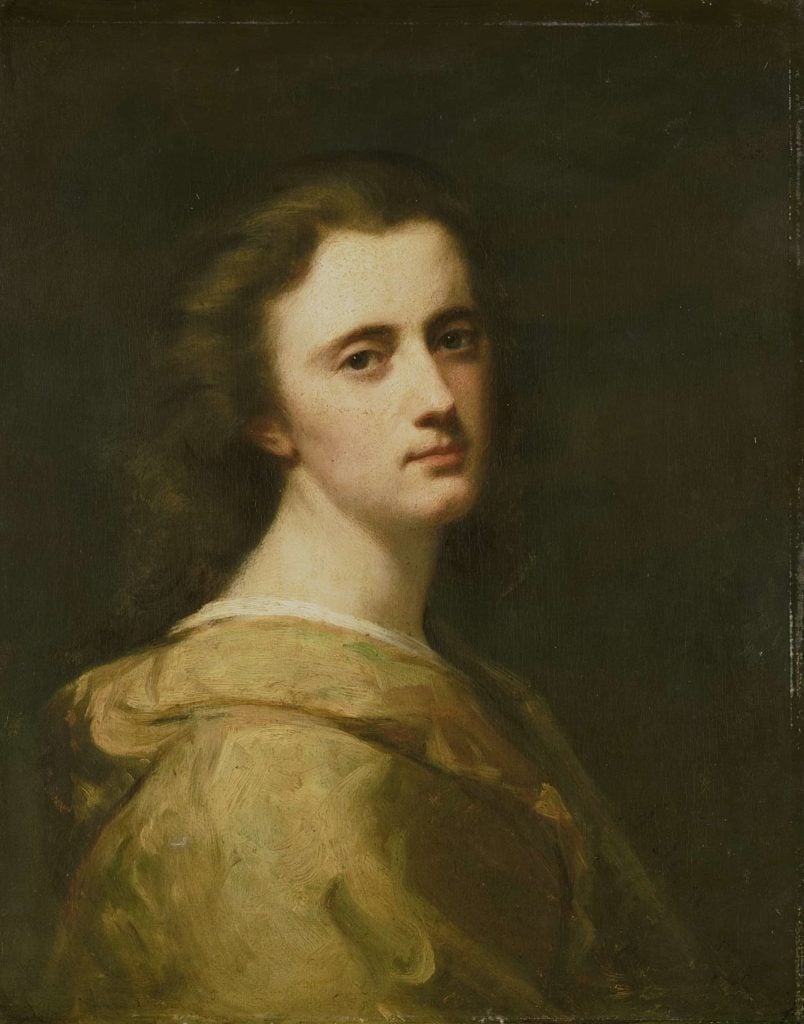 Thérèse spent a period of time studying in Munich and then in Paris. The artistic life of Paris inspired her, especially the artworks by the portrait painter Jean Jaques Henner, admitted for his use of sfumato and chiaroscuro. [caption id="attachment_19677" align="aligncenter" width="706"] 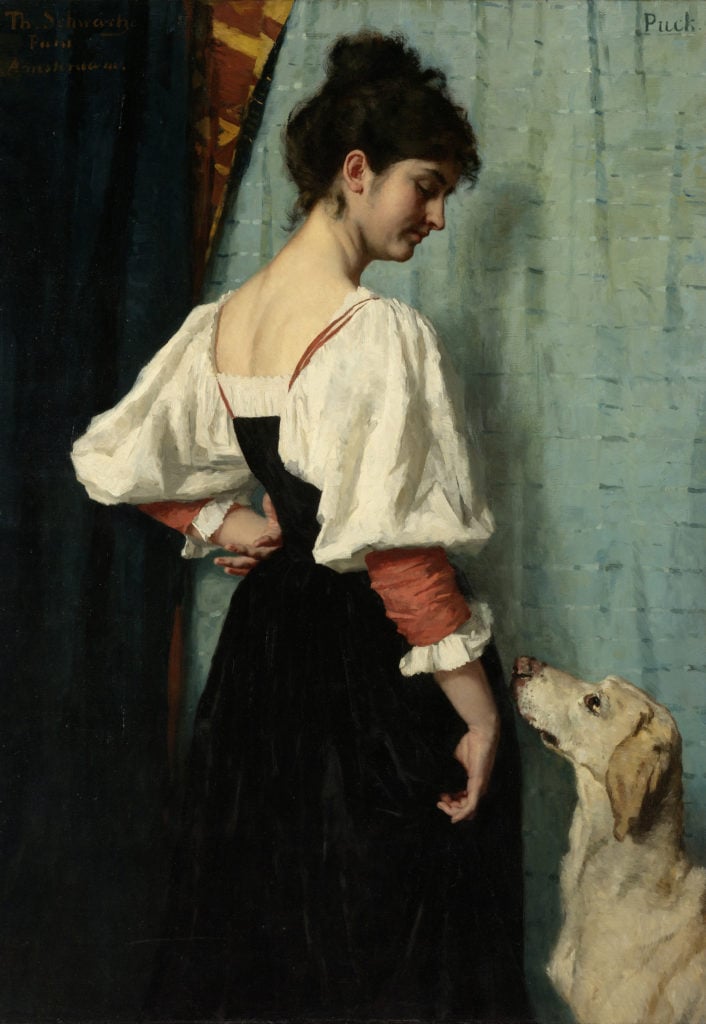 Thérèse Schwartze, Portrait of a young Woman, with 'Puck' the Dog, 1879 - 1885, Rijksmuseum[/caption] On this painting, created in Schwartze's atelier in Paris, the young woman, wearing an Italian costume, exchanges a glance with Puck, the dog at her right. The women's expression is mesmerizing while various rich fabrics of her dress are masterfully rendered. Schwartze's talent and skills became widely appreciated and she received an increasing number of important and wealthy clients. [caption id="attachment_19721" align="aligncenter" width="745"] 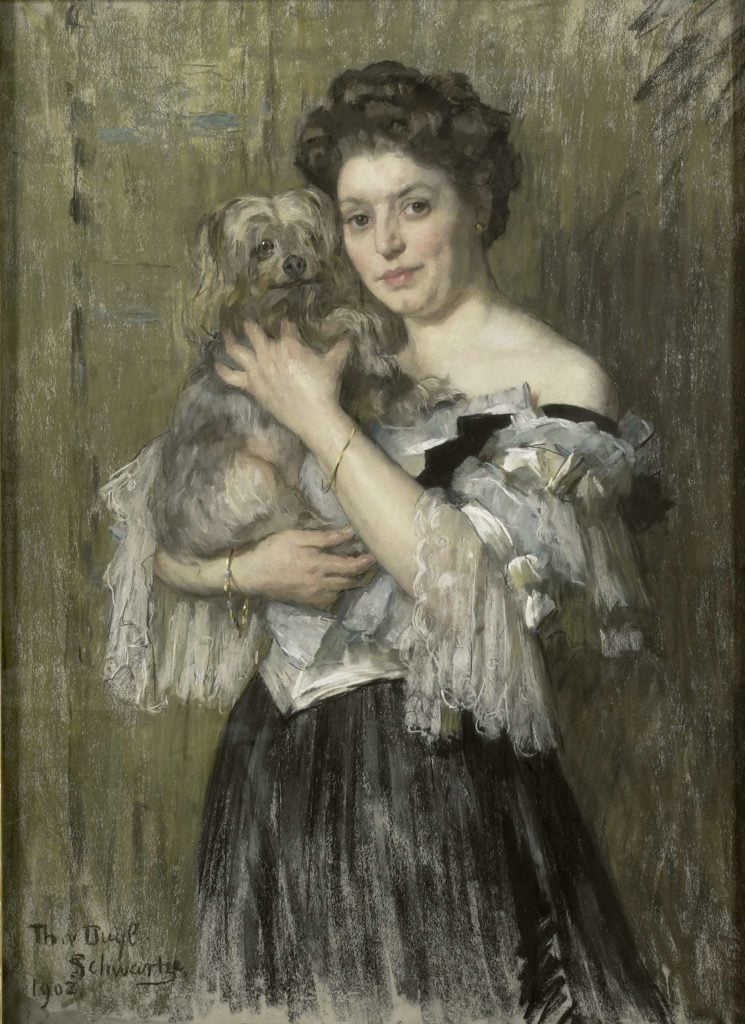 Portraits of the royal family

Thérèse Schwartze became the favourite painter of the Dutch royal family. The portrait of Queen Emma with the little princess Wilhelmina in her arms was the first assignment that she received from the royal court. It was meant for the king's birthday on February 19, 1881. [caption id="attachment_19702" align="aligncenter" width="808"] 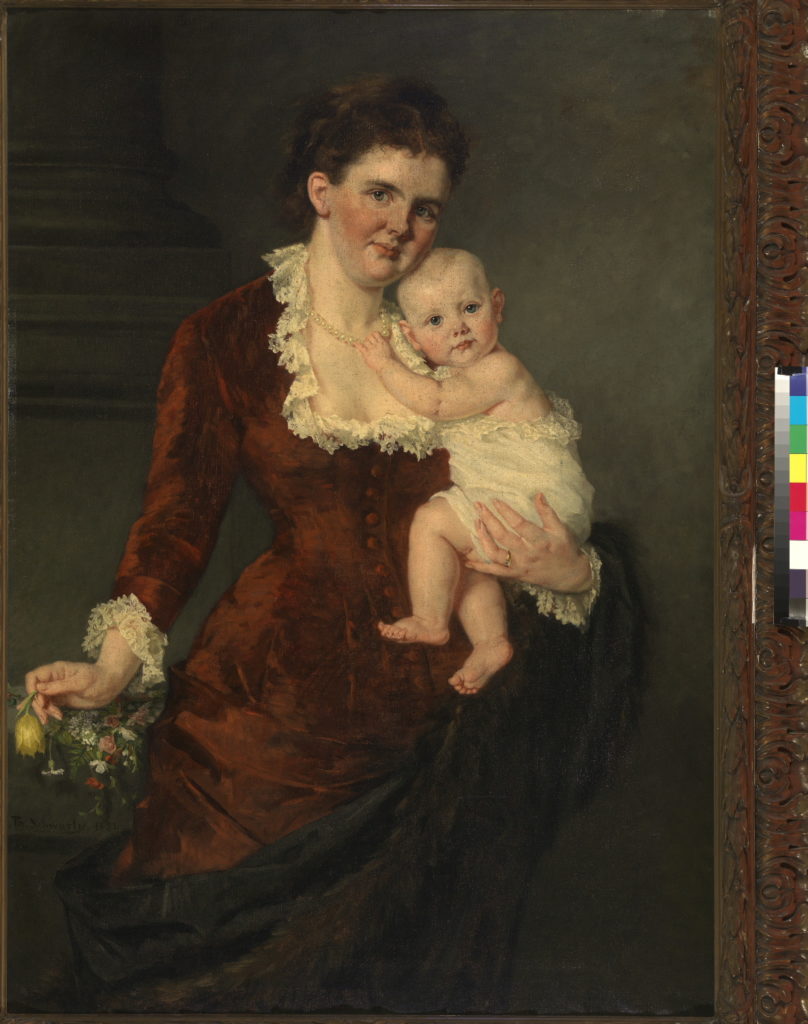 Thérèse Schwartze, Double portrait of Emma van Waldeck-Pyrmont, Queen of the Netherlands, and her daughter, Princess Wilhelmina, 1881, Paleis Het Loo Nationaal Museum[/caption] All the characteristics that made Schwartze's work popular and valued are visible on this portrait: a good, but slightly flattering resemblance, an engaging composition and the beautiful colour palette. In the following almost forty years, Thérèse Schwartze received many more assignments from the royal family. Especially queen Wilhelmina, an artist herself, appreciated Schwartze's style, talent and also the fact that she was a women. [caption id="attachment_19711" align="aligncenter" width="664"] 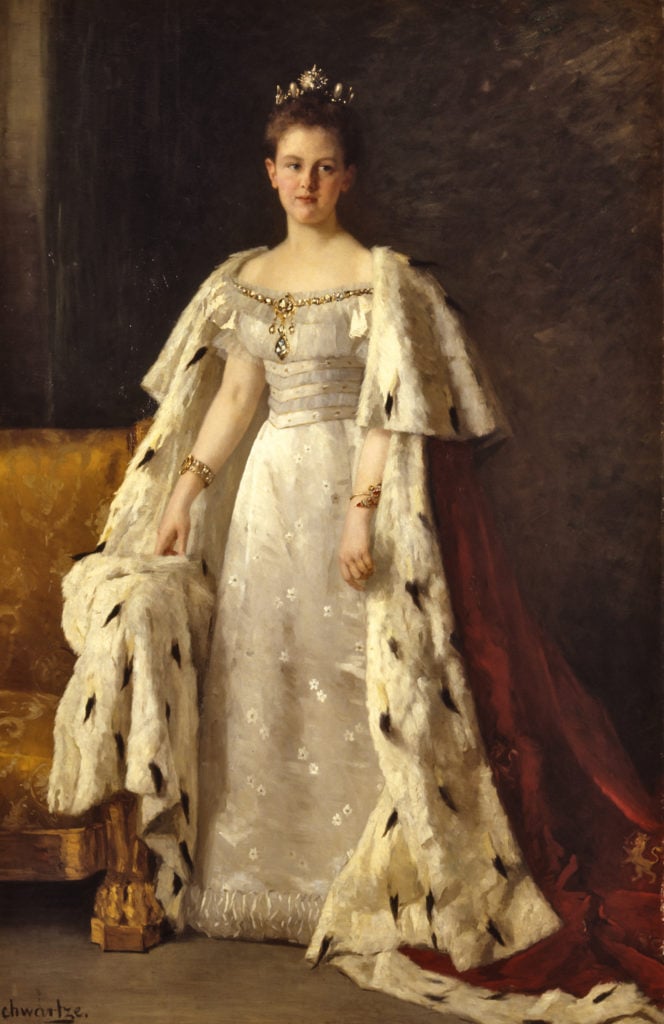 Thérèse Schwartze, State portrait of Wilhelmina, queen of the Netherlands, 1897, Paleis Het Loo Nationaal Museum[/caption] This inaugural portrait was commissioned by Queen Emma in 1897, prior to the inauguration of the young Queen Wilhelmina.  The young queen wears a gown with woven daisies, symbolizing innocence. The decoration on the dress is simple, so the focus shifts to the jewellery: the sparkling diadem and a diamond cord on the décolleté. Thérèse Schwartze was allowed to exhibit the painting at the 'National Exhibition of Women's Work', which was held in The Hague in July, August and September 1898.

A Celebrity and the Knight of the Order of Orange-Nassau

In 1896, Thérèse Schwartze became the first woman to receive the Order of Orange-Nassau, recognizing those who earned special merits for society. In the following years, she exhibited a lot, received multiple awards and was a member of many artists' associations and committees. One of them was Amsterdamse Joffers, women painters who met weekly to paint and show and discuss their works together. The meetings took place in Thérèse Schwartze's house and she was a star of the group. Lizzy Ansingh, the artist's niece and student, was a member as well. [caption id="attachment_19734" align="aligncenter" width="837"] 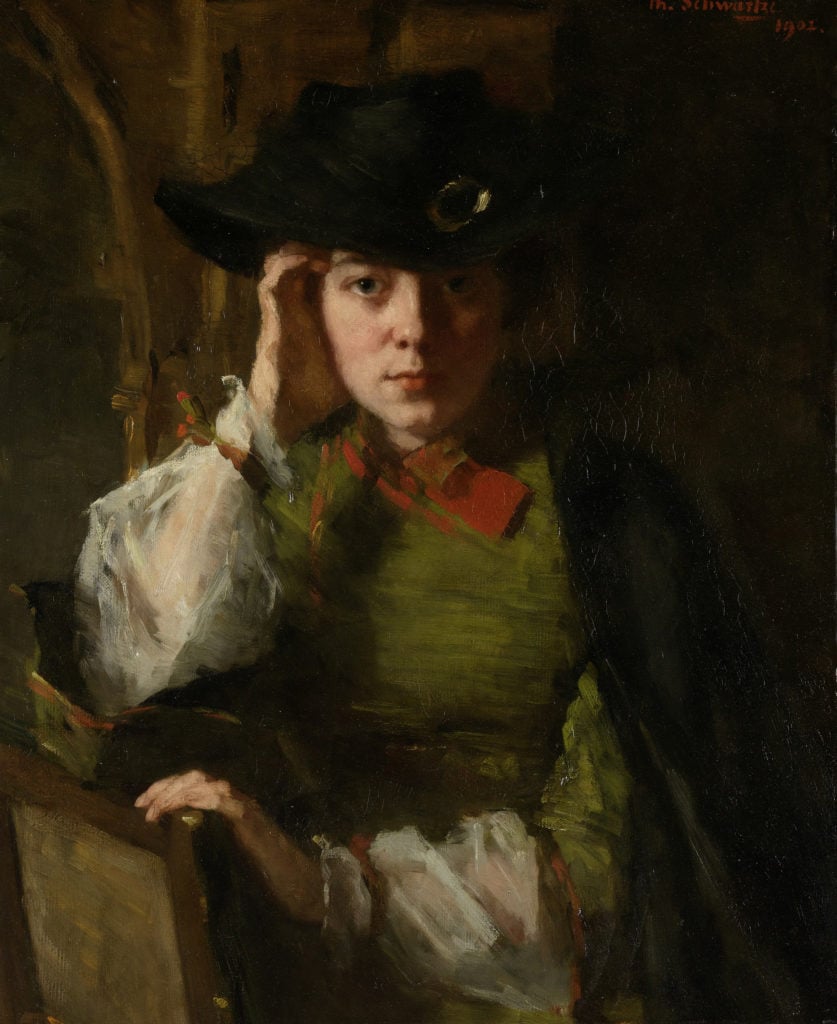 As you may know, March is officially declared as Women's History Month. This article is featured as a part of our celebration of the Women’s History Month, together with Europeana, Europe’s platform for cultural heritage. To learn more about remarkable European women in the arts, sciences, and society, visit the online exhibition Pioneers.