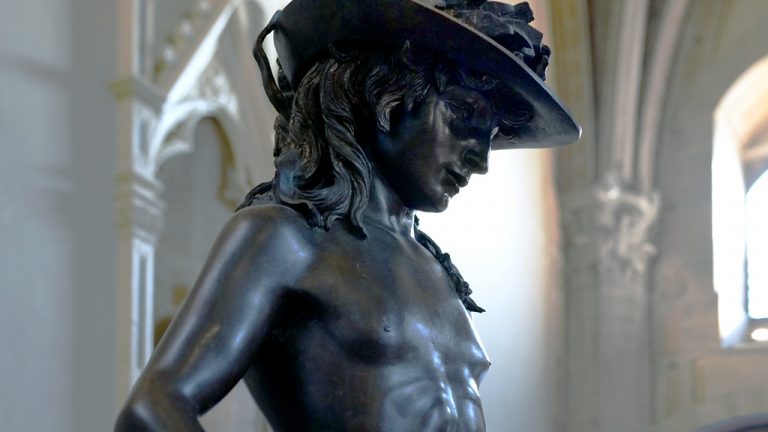 Are You A Conoisseur Of Male Beauty? A Nude Invasion!

The adoration of the male body was an inspiration for many artists and there is no medium better suited to presenting the full beauty and complexity of it than sculpture. Here we will take a look at works by three Florentine Renaissance artists celebrating the male body.

In Renaissance Florence homosexual relationships, or sodomy as it was called back then, was illegal. Despite the otherwise open mindset and curiosity about antiquity, same-sex relationships were condemned as violating the natural right of God. This of course does not mean they didn’t happen.

1. Donatello’s David – The First of the Firsts

This beautiful work of art scores two major historical “firsts”: the first unsupported bronze cast in the Renaissance and the first freestanding male nude since antiquity. David stands already relaxed, the fight with Goliath over, his body leaning in the soft natural contrapposto. His hair is luxurious curls and his thigh is almost caressed by the feather of Goliath’s helmet. His body is soft, inviting us to touch it, but also full of energy from the fight still running through him. There is a light smile on his lips, as the thought of victory becomes a realization. The historian Paul Strathern claims that Donatello made no secret of his homosexuality and that his behavior was tolerated by his friends.

2. Michelangelo’s David – The Most Famous

Despite the beauty of Donatello’s David, it is the one sculpted by Michelangelo that is by far the most famous. He is young, he is tense, he has been exercising. Where Donatello’s David does not have too much muscle and seems almost soft and boyish, Michelangelo’s does not have an ounce of fat on him. He is focused but confident, frowning as if already measuring the distance from his enemy. It is a male body at its peak, young but fully shaped, muscled but not too bulky, perfection.

There is no conclusive proof that Michelangelo was gay, however, it is known that in 1532 he met Tommaso dei Cavalieri and fell in love with him. He sent him multiple letters, sonnets and drawings; despite this, Cavalieri married a woman in 1538 and had two sons. They remained lifelong friends and Cavalieri was present at the artist’s death. It is believed that the Genius of Victory is Cavalieri’s portrait, and some interpret the old figure as Michelangelo (he was 57 when he met 23-year-old Cavalieri).

The youth is presented in a beautiful, dynamic pose, accentuating his musculature. The old man is defeated, but he is slowly raising his head, looking straight, not down. They both look as if something in the distance caught their attention.

This figure is by far the most muscular. Perseus is not relaxing – he is an active figure claiming his victory, boasting. If Donatello’s David was slowly tasting his victory, Michelangelo’s was preparing for the fight with quiet confidence (this sculpture and Perseus stand opposite each other, almost suggesting a “before and after”), and the Genius of Victory seems a tad distracted, Benvenuto Cellini’s Perseus is here and now, in a strong contrapposto, but still standing very firmly on the ground. He is confidence incarnate, celebrating but also focused on his victim, looking at her with satisfaction and contempt. The sculpture was cast from a single piece of bronze, which is a technical feat in and of itself.

Cellini was known mainly as a goldsmith; his skills were admired by Michelangelo. Yet he always wanted to be more than just a goldsmith, aspiring to become a sculptor of fame equal to Michelangelo. Cellini was ambitious, but he also had many run-ins with the law, some of them for sodomy.

In fact, despite being illegal, homosexual relationships in Florence were quite common and typically accepted in the aristocratic circles. Clearly, the love of the male body has given us some of the most stunning sculptures in all of art history.