Seaside Fun and Lots of Nudes: Bathing in Art 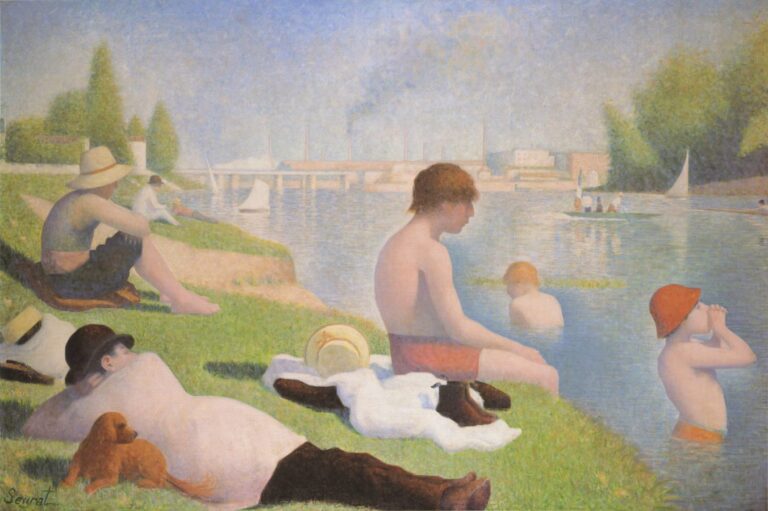 Enjoy The Heat Wave With The Great British Seaside

The Valentine’s Day is coming… It seems appropriate to take a small tour through romantic depictions of bathing in art and some nudes. These paintings, which span just over 20 years, mark not only a difference in fashions for clothing while bathing, but also artistic styles.

From wool bathing suits, skimpy bathing suits to birthday suits, artists had the opportunity to study the human form in the act of bathing and, while Auguste Renoir stuck with the classic nude bather in his work, The Large Bathers, from 1887, with his three voluptuous, fun-loving sun worshippers, Paul Cézanne gave the Impressionist take in his work of the same name in 1900. The positioning of the bodies is important here. In both paintings, the artists use a triangle as a tool to connect the bodies. Auguste Renoir uses the triangle with the girls themselves, while Cézanne utilizes the canopies of the trees to create a focal point.

In both paintings, there is a sense of togetherness and fun being had in the process of bathing in nature.

Georges Seurat originally painted his picture, Bathers at Asnieres (1884), in oils, and later used his pointillist style to great effect in parts of the painting. The pastel shades shimmer on the canvas and the paleness of the bodies reflect the sun as the working boys romp in the river. Seurat shows us how the working class in the industrial city of Asnieres used bathing as a way of taking their leisure from the long hours of work, and the sight of the factory smoke reminds us that leisure time was very short.

In the US, Thomas Eakins photographed live models to show young men frolicking in the watering hole to use for his Realist work, The Swimming Hole, in 1885. The heat from this bathing painting is palpable; the young men are perfect examples of health and the main figure is clearly posing, with his hip kicked out in a very provocative manner. Eakins creates a tableau effect and even put himself in the bottom right-hand corner! As with Cézanne and Renoir, Eakins adopts a triangular composition, which draws the eye up towards the idyllic landscape in the background.

20 years later, fellow American John Sloan delivered South Beach Bathers. Here, the fashionable wool bathing suits in all colors (as long as it was black) are on display. Holidays by now were linked with society and fashion, and Sloan captures the sense of fun that a day at the beach gave. Strangely, the picnic has none of the usual accompaniments; blankets, baskets, plates, etc., but the sense of fun is obvious. The pyramid composition is again obvious, with the standing woman forming the peak. All eyes are drawn to her as she adjusts her bathing cap.

The final piece of bathing in art is by Ernst Ludwig Kirchner, entitled Bathers at Moritzburg, and was painted over a number of years between 1909-1926.

The shapes of the figures, both men and women, in particular the crouching woman, are clearly influenced by Pablo Picasso’s Les Demoiselles d’Avignon, positioned close to each other to create a sense of intimacy that we can see in Sloan’s painting also. This painting is also reminiscent of Cézanne’s grouping of bathers, and the clashing of the color palette emphasizes the nudity. At the time, Kirchner and other members of Die Brücke group would go to Mortizburg Lakes each summer to be with nature, a pastime that was gaining popularity in Germany.