Sun, Sand and the Sound of the Sea – The Great British Summer Captured in Snapshots 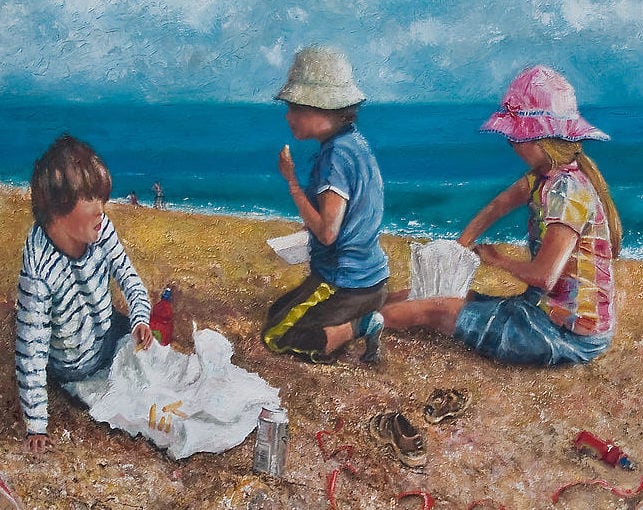 As a born and bred Brit, the meaning of summer for me is quite simple. Get the shorts on, get the sunglasses out and get down to the seaside. Regardless of what country you grew up in, there really isn't anything like the feel of sand between your toes. The sound of people swimming in the ocean, the smell of fish and chips in the air, it's really quite a poetic experience.

Many artists have taken the time to recreate well known beach scenes. However, I wanted to feature paintings in this article that captured the more specific staples of my childhood summer memories. Fish and chip dinners. Castle making on the sand. A seaside holiday isn't just about walking along the beach at sunset, after all.

There is nothing quite like the taste of fish and chips on a sandy beach.

This is a direct representation of my childhood. Take a drive to the beach, set up camp on the sand and find the best place in town to buy a bag of chips. I would get so excited by this that I'd stuff my face so quickly that my mother wouldn't let me go swimming for hours afterwards. But that was okay. As you can see from this painting - there's plenty of entertainment to be had with your friends on the sand. Build a castle. Dig the biggest hole you can. Push each other down the sand dunes. Hours and hours worth of fun.

As a side note to this, that young lad wearing the socks on the beach will definitely regret it later on when he puts his shoes back on. His shoes will be gritty and uncomfortable for weeks! Although, I'm sure we all know that feeling...

There is nothing more fascinating to a young boy at the beech than seeing those shark finned sales whizzing across the surface of the sky blue sea.

It isn't just children that get excited by the prospect of a day by the sea. If the weather's good and the wind is just right then it's nearly certain that you'll see a spattering of sailing boats gliding across the waves. As a young boy I would be mesmerised by the site of these vessels darting and gliding across the horizon. I always imagined that they were shark's fins that had been painted a multitude of different colours, decorating the sea with rainbow bunting.

As an adult, I still look out at these boats and remember the innocent memories I have of them. Although, I did try sailing once during my teens and it scared me half to death - so better to stand on the sand and watch I think.

Is there anything more exciting than a fair ground ride? The steady turning of a carousel on the seaside, parading it's cast of jovial caricatures in front of wide eyed boys and girls.

Now this was something I was never allowed to take part in as a young boy on the beaches of England's south east coast. My mother, protective as she was, never let me set foot on a fairground ride. 'They're death traps!' she would say to me whenever I begged her to let me ride the carousel (on a green train very similar to the one depicted by Kondracki above). He actually captures, rather perfectly, the magic of the fairground carousel. Vibrant in colour, whimsical characters sitting within a finely crafted Victorian-style casing. Is it any wonder that children from all over the globe marvel at these magical structures?

To this day I haven't set foot on one though. At the age of 26 I still hear my mother's voice shouting in my direction. 'Don't you dare go near that deathtrap! If you do you won't get any fish and chips for lunch!'

I don't care how fun the carousel looks - nothing is worth giving up the chance to have a fish and chip dinner at the seaside.