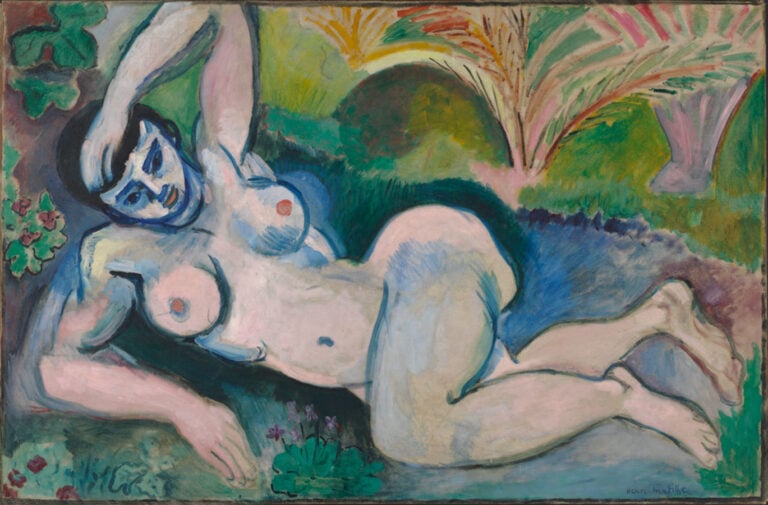 If you happen to feel negative about your body size, your weight, or your shape from time to time (or at all times, like me), then have a look at these paintings. They will hopefully show you that each body can be beautiful and can make a subject for a work of art. Here’s body positivity in art!

1. Rubens, Venus at a Mirror

This painting is hung up in my wardrobe, so if I ever feel uncomfortable with a roll of flab or two on my belly while dressing, I look at her. Rubens‘ Venus is a big and powerful woman. She isn’t coy, doesn’t pretend to be someone she is not. She is not afraid of her own body and doesn’t need anybody’s approval or praise to feel beautiful – in stark contrast to William-Adolphe Bouguereau’s The Birth of Venus. Her beauty is in her splendor and confidence.

When critics saw this painting in the Parisian Salon, they called it ‘dirt’ and described the naked bather as meat on a butcher block. Courbet had intended this work to be even more straightforward, as the loincloth on the naked figure was added later, probably to avoid controversy. However, the cloth didn’t help at all and the viewers found the scene vulgar and pointless since they couldn’t figure out its meaning. Nobody really knows what is happening in the picture, is the bather a mistress of the clothed woman or is she her companion? The only thing we know that she looks like a typical woman made of flesh and bones, rather than an idealized and polished odalisque from many of the works exhibited at the Salon at that time. She was an image of normality and that might have been the reason why she became so controversial.

Matisse shocked the public with this piece at the Société des Artistes Indépendants in 1907. Its detractors despised the disproportionate and androgynous body which was tinted with the unhealthy colors of blue and green, to such an extent that they burned the painting in effigy in 1913 at the Armory Show in Chicago. At the same time, the painting served as a huge inspiration to other artists like George Braque and Pablo Picasso, whose extremely famous Les Demoiselles D’Avignon bear resemblance to the Blue Nude.

Each woman in Picasso‘s life can also represent a different phase in his painting career. Marie-Therese Walter, whom he met on the street when she was 17, let him study volume and modeling since her shapes allowed him to approach painting forms from a sculptural perspective. This painting is all about curves. Marie-Therese is painted with sinuous lines, and she reclines on a sofa which is round, too. The triangular pattern on the background is meant to emphasize the curves even more. She seems to feel very comfortable lying in a relaxed pose. Her curves make her look not only seductive but also very feminine and vigorous at the same time.

The model for this unsettling work is Gauguin’s Tahitian wife Tehura. She was an adolescent girl scared of spirits, which play a large part in Tahitian traditions. The composition of this ‘study of the Oceanic nude’ is reminiscent of Manet’s Olympia, yet both the mood and the model are different. Tehura’s body is not a body of a courtesan but of a maturing girl who is still unsure of the future ahead. The raven, “a bird of the devil who watches”, refers to the poem by Edgar Allan Poe. Why is the raven watching her? And what does the title refer to? We don’t know.

Klimt tended to paint such tall and skinny women that they would often look almost masculine. Yet in this case, his choice of depicting the mythical Danae is different. The painting’s composition is very unusual as it shows her from above and in the fetal position (which suggests she feels safe while asleep), and moreover, it brings her large thigh to the fore.
Her naked breasts and ginger hair imply that Klimt wanted to render Danae as a femme fatale who is seductive and sensual, but innocent at the same time. She certainly is so, and the curves of her body only add to this golden charm.

Jenny Saville is famous for painting fleshy and oversize bodies. She doesn’t idealize and doesn’t preach either. She said that she wanted to be a ‘painter of modern life’ (the one that the poet Charles Baudelaire was looking for in his times), who would therefore paint only ‘modern bodies’. Many of her works are painted as if looking through a wall of glass, and her subjects, although so typical, capture the viewers’ attention. The depicted model is painted from a worm’s eye view, which makes her look proud, powerful, and grandiose.

8. Jean Dubuffet, The Tree of Fluids

Jean Dubuffet’s works were purposefully made to look ugly and crude. He aspired to create ‘deskilled’ and outsider art, which would draw a lot upon the drawings by children or the mentally ill. He called such works ‘Art Brut’. This portrait of a woman is exaggerated, and her body inflated to an enormous and unnatural size.  The title, however, suggests she’s like a tree that contains all essential fluids needed for existence. She is a spring of new life, new energy, and new beauty.