Avatars of Vishnu. Ten Incarnations of the Eastern God 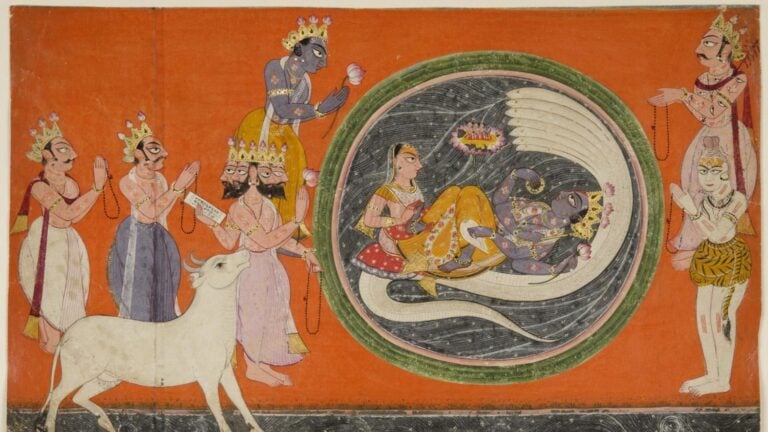 Vishnu has been worshipped for over 2000 years as the supreme protector of the Hindu triumvirate, along with Shiva and Brahmin. His role in the trinity is to preserve order. Whenever humanity is threatened by evil or chaos he descends onto the earthly plane of existence, in his various avatars or incarnations, to restore dharma or the path of righteousness.

Vishnu and his avatars have inspired generations of artists and can be seen in the earliest art, architecture, and literature. In his primary form, Vishnu is recognizable in paintings by his distinctively blue skin. When depicted in sculptures or architecture where the colors are not apparent; Vishnu is identifiable by his attributes such as a conch shell, a discus, a mace and a lotus. Vishnu is also depicted in art, along with his consort, Lakshmi or with two consorts: Shri Devi and Bhu Devi; who are believed to be Lakshmi split into two deities. Vishnu’s animal mount or companion is Garuda, who is part-man, and part-eagle.

The ten incarnations of Lord Vishnu are collectively known as the Dashavatar. These avatars often share Vishnu’s blue skin color. Although they each have individual talents, personalities, and iconography.

Matsya is Vishnu’s first avatar. His legend is reminiscent of the Noah’s ark tale. In this form, Vishnu appears as a fish, who reveals himself to the first man, Manu. He warns Manu about a great flood that will occur in seven days and which will destroy all life. Then, he instructs Manu to procure medicinal herbs, seeds, seven saints, the serpent Vasuki and other animals and take refuge in a boat built by the Devas; in order to save them.

In this artwork, Matsya is depicted in an animal-human hybrid form. Here, his four hands hold the usual attributes of Vishnu. In other renditions, he appears in fish form.

According to the legend of the churning of the ocean, the Devas (Gods) and Asuras (Demons) joined forces to churn the cosmic ocean. Believing, that this would release gifts that had sunken to the bottom of the ocean; including Amrit, the elixir of immortality.

In the following artwork, Kurma is portrayed in an animal-human hybrid form. In other portrayals, he appears in tortoise form supporting the mountain on his back. Whilst in other renditions, Vishnu is depicted twice, once as Kurma supporting Mount Mandara, and once on top of the mountain as Vishnu. He may also appear a third time as Krishna.

Varaha is one of Vishnu’s most popular avatars and has many dedicated temples.

According to the legends, the demon, Hiranyaksha, drags the earth to the depths of the ocean. Here, Vishnu appears as a wild boar, to bring the earth back to the surface.

Vishnu battles Hiranyaksha for a thousand years and after he has triumphed he raises the earth out of the water with his tusks, where she remains to this day.

In the painting below, we see the Earth represented by the Goddess Bhu Devi, and Vishnu in his Boar avatar alongside his animal companion, Garuda the bird-like creature.

Vishnu incarnates into his Narasimha avatar, who is part lion and part man in order to do battle with the Asura (demon), Hiranyakashipu.

According to legend, Hiranyakashipu, secured superhuman powers from Brahma through the mastery of yogic austerities; which made him close to invincible. Hiranyakashipu could not be vanquished by man or beast, indoors or outdoors, nor on earth or in the heavens.

Arrogant in his powers, Hiranyakashipu wreaks havoc in heaven and on earth. He repeatedly tries to kill his own son, Prahlad, who is a devout follower of Vishnu. One day as Hiranyakashipu challenges Prahlada, Vishnu emerges as Narasimha, who is part-man, part-lion. Narasimha – who was neither man nor beast, dragged Hiranyakashipu to the threshold – that was neither in nor out, and placed him upon his lap – that was between earth and heaven.

Narsimha then disembowels Hiranyakashipu and rips him to shreds.

Narasimha has a large following of worshippers. Including many warriors who have associated themselves with this powerful incarnation of Vishnu.

The Rig Veda tells the story of the Asura, Bali, who performs austerities to Brahmins (the Priest class). He gains unparalleled power which he uses to seize control over the whole universe. The Devas turn to Vishnu for help, who incarnates as Vamana, the dwarf.

Vamana disguises himself in the humble clothes of a young Brahmin and approaches Bali, to try and gain his favor. He asks Bali to give him a parcel of land, only as big as he can cover in three steps, which Bali readily grants. Vamana then transforms into a giant and takes possession of heaven, earth, and the underworld. Vishnu later gives Bali a small kingdom to rule.

The Vamana is Vishnu’s most ancient identity and the first where Vishnu appears in a fully human avatar. He is sometimes known as Trivikrama, the ‘Taker of the Three Steps’.

In the avatar of Parashuram, Vishnu appears as a vengeful Brahmin; who descends to vanquish the increasingly arrogant Kshatriya rulers (of the warrior caste) who do not respect the special social status given to Brahmins (of the priest class).

Vishnu appears as a man carrying an axe in order to restore social order. There are temples dedicated to him throughout India. Where he is often depicted holding an axe and a lotus bud. The word Parasuram means Rama with an axe in Sanskrit.

Parasuram is known for exacting gruesome vengeance for the murder of his father by a Kshatriya. He kills all the male Kshatriyas on earth 21 successive times (for, each time, their wives survived and gave birth to new generations). Five lakes were filled with their blood.

This artwork from the Company school of art comes from a set of 100 paintings made in Trichinopoly in Southern India. Its patron was likely someone with scholarly interests; since such detailed studies of Hindu deities were not common among Company artworks.

Rama was born as the eldest Prince of Ayodhya. His step-mother tricked his father into unwillingly exiling Rama to the forest for 14 years. In order to secure the throne for her own son, Bharat.

Rama’s wife Sita, and his brother, Lakshman accompany him to the forest. His adventures during exile, include the rescue of his abducted wife and the vanquishing of the ten-headed demon king, Ravan. These adventures are detailed in the ancient Hindu epic of Ramayana.

Rama is often depicted with blue skin and holding a bow and arrow – often in a forest setting and accompanied by his wife and his brother.

Though there are few temples dedicated solely to the worship of Rama, he is a revered deity in Hinduism. He became a model for Hindu kings all over India and Southeast Asia.

Krishna is the eighth avatar of Vishnu and is depicted in many forms because there are so many legends surrounding his life.

One legend recounts how he is born a royal prince, but his parents send him away when he is still an infant, to protect him from a murderous uncle.

Despite this, he has an idyllic childhood in rural pastures where he grows up to be a goatherd. He is a charismatic flirt and accomplished flute player and the tales of Krishna’s romantic relationship with the milkmaid Radha, remain a very popular theme in Hindu arts and literature.

Over time, Krishna’s divine and superhuman abilities become apparent and he eventually reclaims his rightful throne.

Notably, Krishna, is a central character in the Mahabharat and the Bhagavad Gita and also appears in other ancient Hindu literature. He is depicted with blue skin, wearing a crown of peacock feathers and a yellow loincloth.

In some traditions, Buddha is believed to be the ninth avatar of Vishnu – the only avatar traceable to a historical period.

Around 500 BC, the wealthy prince Siddhartha, disillusioned by war and strife, gives up his wealth, to become a hermit. After meditating upon the answers to his questions about life, he attains enlightenment and preaches an alternative path to the evils of Hinduism.

The Buddha incarnation, however, receives little attention in Hindu practice. It was possibly created to put Buddhism into a subordinate position to Hinduism by bringing the religion under the same umbrella.

According to Hindu belief, humanity is now in the period of Kali Yug – a period of evil and decadence. Which will dissolve in the great destruction (brought about by Shiva) to make way for regeneration.

It is believed that Vishnu will appear in his final avatar as Kalki; to usher in the end of this phase and the beginning of a new golden age.

However, Kalki is not extensively worshipped, except as part of the larger group of avatars or Dashavatar.

The avatars included in the Dashavatar can vary. In some traditions the Buddha is omitted from the list and Balrama is included.

As is common with Hindu mythology, there are complicated and contradictory legends about Balrama. In some versions, Balrama is an incarnation of Vishnu and the older brother of Krishna (who is also an avatar of Vishnu). There are several paintings of Balrama and Krishna together, where Krishna is depicted with blue skin, while Balrama has white skin.

There are other theories that suggest that Balrama may be the incarnation of Vishnu’s giant serpent, Shesha; on whom Vishnu reclined while creating the cosmos. Balrama is often depicted with a snake, which suggests that may be the case.

Balrama is frequently depicted with a plow, which points to ancient, possibly agrarian roots. He is revered for his great strength, although he is rarely worshiped independently.