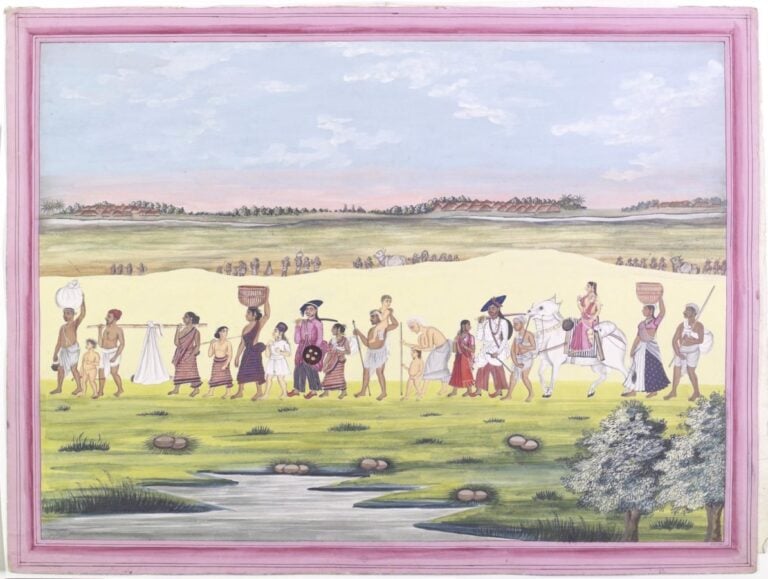 Refugee Men, Women and Children Fleeing from the Scene of War, gouache on paper, Made in Tanjore, ca. 1800, Courtesy Victoria and Albert Museum, London.

Painting in rich Mughal and Rajput styles, the court painters shifted their renderings to the demanded adjustments of British East India Company thereby having projected a palpable change in the map of Indian art. The shift occurred during the mid 18th century, lasting until modernism developed its wings.

While we discuss the transitions that triggered the creative minds to undertake modernized revolutions during the brink of independence, the causative factors run back to times when it was all about simple living. Company style, to eulogize, was an acceptance of Western styles and the reveling in the compelled confluences that attributed itself with a broader term of Company School.

During the colonial time of India, in the early 18th century, East India Company hired artists to paint a range of artworks for documentation as well as decoration. While the British seized the southern part of Asia and expanded their territories, the Indian aesthetic was about to experience a paradigm shift – the proven creative alteration that would sustain for the coming centuries. Besides, it is was also the same period when company employees moved from England, making India their home.

The Indian painters had been deft in minute detailing, crisp rendering, and possessed exceptional craftsmanship. Having been mesmerized by the exotic flora and fauna as well as indigenous art and architecture, the East India Company had an urge to secure this beauty by the accomplished hands of these talented painters. Not only the British artists were involved in the same, but many Indian painters were commissioned to assist and draw the vicinities they perceived as significant. Owing to the absence of cameras and an inclination to preserve memories, authorial officials were also interested in capturing the views in order to take them back home for their folks.

The photo-realistic representations by the Indian artists were the epitome of the crafts that followed from the generations in India. Company school was an erstwhile form of modernism.

The Company school artworks were first initiated in Madras Presidency. Madras, today, known as Chennai, is a town on the east-southern coast of India. Later spreading to other parts of India like Calcutta, Patna, Murshidabad, Benaras, Lucknow, Agra, Delhi, Punjab and many more, it was a sustaining practice until the advent of photography.

Hybridity through the Paintings

Although it was a degeneration of the pre-existing fine art of ancient India, Company School works dwelled on the common matters rather than focusing on the royal kings and nawabs. The paintings pre-eminently portrayed the common men, rural routine, exotic landscapes, varieties of birds and the rich foliage that defined the Asian subcontinent. Mulling over the range of infinite artworks produced two centuries, the company paintings, not only project the myriad of compositions but are epitaphs of history of ordinary living of the medieval times. For the present, they are retellings of the absent cultural milieu, the rustic bourgeois and extinct stories of native infrastructure.

When Delhi was yet to be discovered, the Thomas and William Daniel series of paintings reveal the earlier ruins of the exquisite Mughal forts and edifices. Thomas and William Daniell were noted British painters who travelled around multiples cities in India. They painted in watercolours as well as aquatint, producing a seminal publication called Oriental Scenery covering the timeline of years, 1795 to 1805.

Apart from the depicted forms, Indian artists of Company School also began accepting the techniques and mediums introduced by the company. While Indian miniatures were devoid of perspective and shading, the induction of the same in company paintings is evident with the hints of retained stylization.

The intriguing queries about what caused the change from painting in miniature style to the present expression resolve in the era of Company school. The socio-economical, as well as political factors of the artists and the then presiding government, maneuvered to suit each other’s obligations. Company school serves as a dichotomous bridge of evolution to the present Indian modern art.