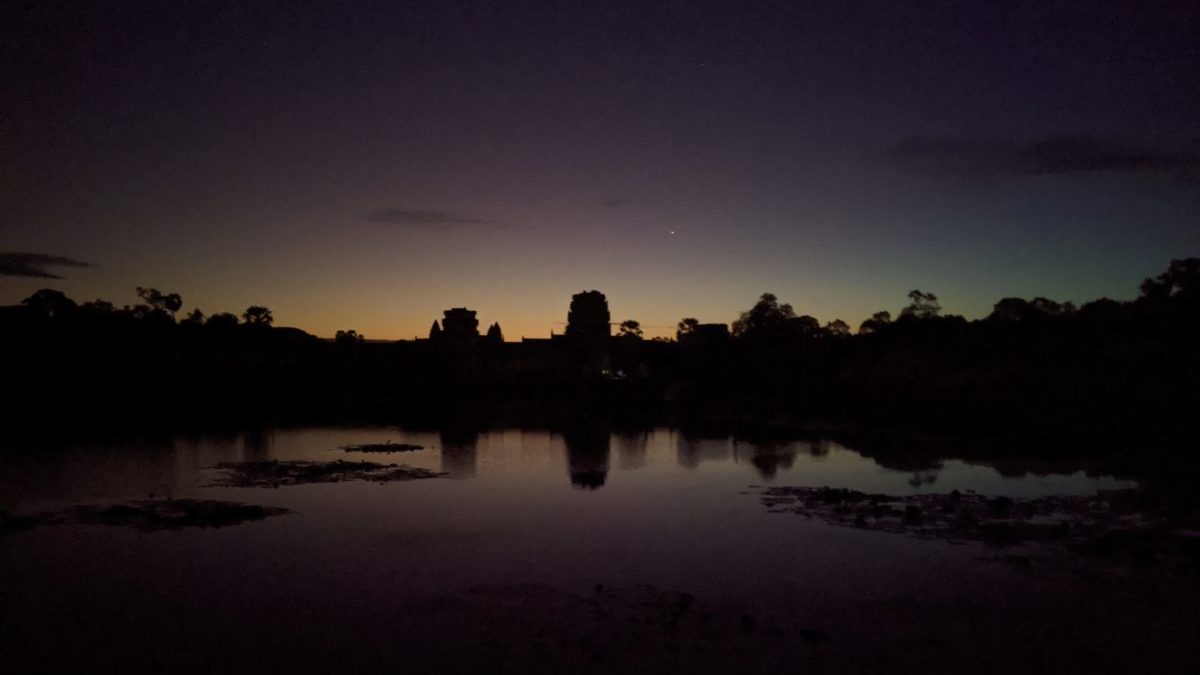 The Khmer kingdom thrived in the Cambodian region from the 9th to 15th centuries with an empire that stretched all the way from modern-day Myanmar down to Vietnam. The Angkor Wat (or city temple) was built by Emperor Suryavarman II between 1113 and 1150 and is arguably the most famous of all Khmer monuments. This temple complex is spread across 400 acres and is the largest religious monument in the world.

In the early days of the Angkorian period, the worship of Vishnu was secondary to that of Shiva. However, Vaishnavism (worship of Vishnu) was on the rise in India, and likely influenced Suryavarman II who broke with the Shaivaite (worship of Shiva) tradition of his predecessors and dedicated the Angkor Wat to Vishnu instead of Shiva. An inscription identifies Suryavarman II as “Paramavishnuloka,” or “he who enters the heavenly abode of Vishnu.”

While most temples in the region are oriented to the East, the Angkor Wat is unusually oriented to the West – a direction typically associated with death in Hindu culture. There is wide speculation as to the cause of this design. Some scholars speculate that it is an indication that Suryavarman II intended Angkor Wat as a mausoleum for himself. Further, the galleries of bas-reliefs read counterclockwise, another indication that the temple is associated with funerary rituals.

Angkor Wat is constructed with about 5 million tons of sandstone, likely obtained from a quarry 25 miles away with the help of 6000 elephants. The layout is designed to represent Mount Meru, the home of the Gods, according to tenets of both Hinduism and Buddhism. The five towers are intended to recreate the five peaks of Mount Meru, the outer walls of the enclosure represent the mountains enclosing the world, and the moat depicts the cosmic oceans beyond.

Many surfaces of the Angkorian temples were once painted and small traces of the paint remain to this day. The original outer wall once also enclosed a city and a royal palace, occupying a space of about 200 acres. Like other secular Khmer structures, these buildings were made in perishable materials that did not survive the ages.

The galleries of narrative bas-reliefs at Angkor Wat are a masterpiece of the Khmer period that feature several important mythological events such as scenes from the Ramayana, the Mahabharat, and the Churning of the Ocean of Milk, as well as some historical occurrences from the life of Suryavarman II.

There are several carvings of devatas or Gods and Goddesses and of 2000 apsaras or celestial dancers all over the walls of the temple.

Buddhism proliferated in the Cambodian region during the 13th century. Gradually, it became the dominant religion of Cambodia and Angkor Wat, along with other Hindu monuments were repurposed for Buddhist worship. Buddhist iconography was added alongside the existing Hindu symbols and sculptures of Buddha were erected. The temple continues to be used for Buddhist worship to this day.

Though Angkor Wat was known to local Khmer people, it remained cloaked from the rest of the world until the end of the 19th century by thick jungles covering the area. Archeological excavations have been carried out in collaboration with UNESCO and with the governments of India, Germany, and Japan. Recent studies also confirm the presence of more Angkorian cities and temples, some that predate Angkor Wat. These studies also revealed the existence of ancient highways that connected Angkorian sites.

The Authority for the Protection and Management of Angkor and the Region of Siem Reap (APSARA) was created in 1995 to manage and safeguard sites of historical significance. APSARA has been instrumental in combating the organized vandalism and plunder of the ancient artifacts for sale across the Cambodian border. Walkways and railings have also been added for safe viewing of these monuments.

Though tourism provides a much-needed financial boost both to the conservation efforts as well as the Cambodian economy, it has also resulted in a substantial burden on the monuments. New hotels and restaurants are added to accommodate the increased tourism and increase the burden on the water table. In the future, this could undermine the stability of the sandy soils and lead to damage or destruction of the Cambodian monuments. There UNESCO and local authorities are in the process of implementing sustainable plans to safeguard the future of the Khmer monuments.

Most famous of all Khmer monuments

Though just one of the hundreds of surviving Khmer temples and structures, the Angkor Wat is the most famed of all Cambodia’s temples. It has survived despite earthquakes, the devastating Khmer Rouge regime and centuries buried under thick forests and it continues to enthrall the nearly 2.6 million tourists that visit Cambodia every year. It is impossible not to marvel at the grand architectural genius and beauty of this incredible monument.

If you find any joy and inspiration in our stories, PLEASE SUPPORT
DailyArt Magazine with modest donation. We love art history and we want to keep going with writing about it.
$5 $10 $25 $50 $100 MONTHLY
Related Topics:angkor wat, Cambodia, featured