The Love Affair of Radha and Krishna in Art 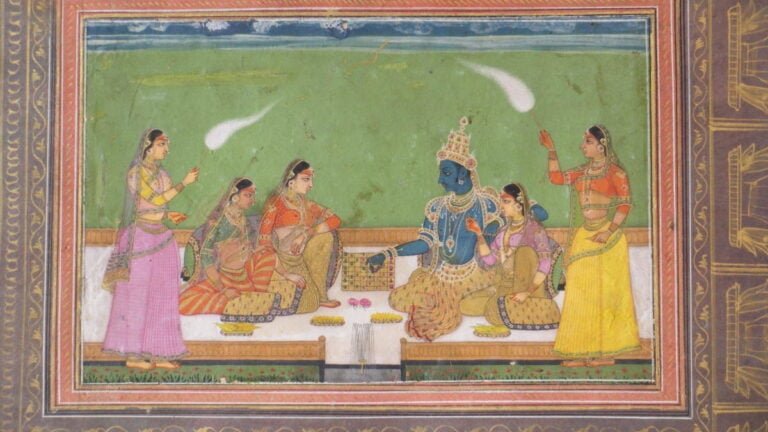 The Diwali Festival Through Art

The love story of Radha and Krishna has been immortalized in art by poets, musicians, writers, and painters over the long history of Hinduism. The divine pair is often referred to as the single unit of “Radha Krishna” and is a popular artistic theme that flourished in the royal Hindu courts from the 15th century on that continues to inspire artists of various mediums today!

Krishna is the eighth avatar of Vishnu, the creator of the Hindu pantheon. Meanwhile, Radha is a milkmaid or gopi, a mere mortal from Krishna’s childhood home of Vrindavan. When Krishna was young, he was a charming and good-looking man to whom women flocked.

Though Krishna was hopelessly infatuated with Radha and Radha with Krishna, their love story had no fairy tale ending as Radha was married to another man. The marriage (or lack thereof) of Radha and Krishna remains irrelevant as Krishna is forever associated with Radha. Their love is eternal and sublime, and transcended mortal relationships or institutions. The relationship between Krishna and Radha is considered to be a symbol of the union between the human soul and the divine.

The worship of Krishna can be traced back to the 5th century BCE. Tales of his life and adventures have been recounted in many ancient Hindu texts from different periods. He is considered the epitome of Hindu heroism! When he was a mere infant, Krishna’s parents sent him away to be raised in hiding in the remote village of Vrindavan, away from the clutches of his powerful and murderous uncle, Kansa. Kansa feared a prophecy that Krishna would grow up to kill him. (Spoiler alert – he did!)

In Vrindavan, Krishna spent an idyllic childhood spoiled by his foster parents. There he grew to be a charming young man and an accomplished flutist. Of all the stories and adventures of Krishna’s life, none is more bittersweet that his larger-than-life affair with Radha.

Just as Radha was married to another man, Krishna’s heavenly consort is Rukhmini, the earthly avatar of the Goddess Lakshmi. There are writings that claim Krishna had 16,108 wives and fathered 180,000 sons! Radha, however, remains a prominent figure in Hindu religion and art and is remembered as the most cherished consort of Krishna.

Krishna is instantly recognizable in artworks and sculptures by the distinct peacock feather in his hair and the flute in his hands. His other attributes include a discus and a club, both gifts from Agni, the God of Fire. In artworks where color is apparent, he is identifiable by his unique blue-black skin and his yellow robes. Since he was raised in a village of cowherds, he is often portrayed with cows. Various scenes from his life are the focus of artworks of different regions. For example, in Khmer art the most prominently featured is the tale of Krishna lifting Mount Govardhan, a focus in one of the galleries of architectural reliefs of Angkor Wat in Cambodia.

The Gita Govinda, or the song of Govinda is an important composition describing the story of Radha and Krishna. It was composed by Jayadeva, a 12th century Hindu poet from Eastern India. This work is also significant as it presents the view that Radha was greater than Krishna. It is an important text of the Bhakti or reformation movement of Hinduism, particularly among certain sects of Hinduism where Radha is worshipped as a deity in her own right. The poem describes the relationship in great detail and became a source of inspiration for painters of various royal Hindu courts.

Art featuring Radha and Krishna was created not merely for aesthetic pleasure but was also considered a form of worship and devotion of the artist (and likely, the patron). Numerous schools of art created renditions of the divine couple with regional stylistic variations. Perhaps the oldest Radha-Krishna paintings were from Rajputana, in Phad paintings. They were compact depictions of the couple, usually on fabric. In the esteemed Kishangarh court, Nihal Chand created several paintings of his patron, Sawant Singh with his beloved, Vishnupriya in the image of the divine couple. Madhubani paintings, from Northern India, depicted the couple together with a floral or geometric background. Other important schools that heavily featured the divine couple were the Tanjore works from the royal court of Thanjavur and Pichwai works from Aurangabad, Rajasthan, and the Deccan area of India, to name a few. There exist thousands of “Radha Krishna” paintings of both historic and contemporary origins in museums, art galleries, and homes all over the world!

The Complexity of Hindu Mythology

A basic fundamental to understanding Hindu art and mythology is an appreciation of the contradictions, variations, and omissions across Hindu literature, perhaps an unavoidable consequence of the thousands of years of its existence and practice. Theories, stories, and rituals vary greatly across traditions and regions, and there is rarely an absolute consensus. In some versions, the divine couple was married to each other as children, while in others they never married, and yet in others where Radha does not feature at all! Radha is, however, broadly accepted as an important and recognizable figure in Hinduism and the love story of Radha and Krishna continues to inspire Hindu adherents and Hindu artists today.