The Churning of the Ocean of Milk 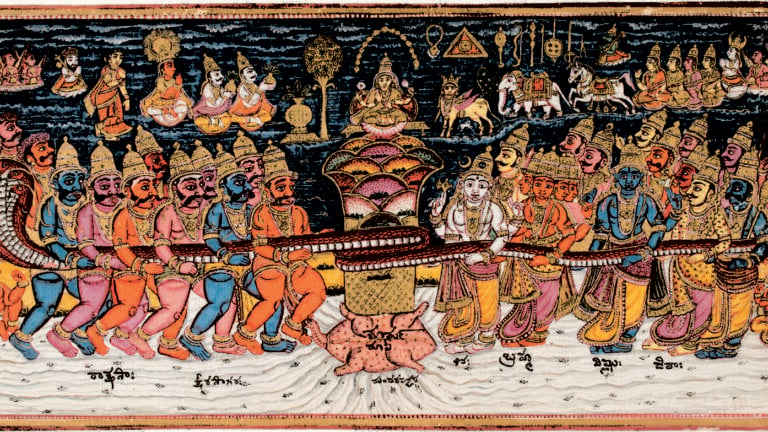 The churning of the ocean of milk is a momentous event in Hindu mythology that appears in the Bhagwat Purana, Vishnu Purana, and the Mahabharata. It is the story of the Devas (the Gods) obtaining the ultimate prize of immortality by consuming Amrit, the elixir of immortality. This event features prominently in Hindu iconography.

The legend begins with Indra, an ancient Deva renowned as the King of the heavens, and the God of rain and thunder. As Indra traveled on his elephant-drawn chariot, he was approached by the Sage Durvasa who offered him a special garland of flowers. Indra accepted the garland and placed it on the trunk of his elephant. Unfortunately, the elephant threw the garland to the ground and greatly offended the Sage, who then cursed Indra and all the Devas condemning them to lose their great strength and fortune.

A collaboration of the Devas and the Asuras

Bereft of their strength and fortune, the Devas sought Amrit, the elixir of immortality from the depths of the primordial ocean. The Devas had to join forces with their mortal enemies, the Asuras (Demons) to churn the cosmic ocean and bring the Amrit to the surface – who agreed to do so in return for half of the reward.

In artwork, the Devas are usually represented by Brahma, Shiva, Vishnu, and Indra, while the Asuras are depicted as frightening men with beast-like features.

Churning of the Cosmic Ocean

To churn the primordial ocean, Mount Mandara was used as a churning rod and the snake-king, Vasuki as the churning rope. The Asuras held the head of the snake and the Devas held its tail and they pulled his body alternately, causing the mountain to rotate and the ocean to churn.

When placed in the ocean, Mount Mandara began to sink, so Vishnu, in his second avatar as the tortoise Kurma came to the rescue and supported the mountain on his shell. The colossal tug of war continued for a million years before the gifts of the ocean were revealed.

In
artwork based on this scene, Vishnu is often depicted twice; once in his Vishnu
form on top of the mountain and once as Kurma, stabilizing the churning rod.
Sometimes he may also appear a third time as Krishna, pulling Vasuki’s tail
along with the other Devas.

Before the Amrit was revealed, the mythological poison of Halahala was released from the depths of the ocean. Shiva hurriedly drank the poison to prevent it from contaminating the ocean. His wife, Parvati saved him by choking Shiva, which stopped the poison in his neck from reaching his stomach. According to some legends, the Halahala may be the reason for Shiva’s iconic blue color.

Gifts of the Ocean

Several ratnas or gems other than the Amrit were bestowed by the cosmic ocean during this difficult toil, such as; Chandra, the moon God; Airavata, the elephant; Madhira, the goddess of wine; Apsaras or celestial dancers; Lakshmi, the goddess of wealth and good fortune, and many others.

When the Amrit was finally revealed, the Devas and Asuras immediately reverted to their rivalry and tried to obtain the elixir for themselves. Vishnu turned himself into a beautiful woman named Mohini, to distract the Asuras while the Devas hurriedly swallowed the Amrit and gained the ultimate prize of immortality.

This mythological tale is very popular in Khmer iconography. The most famous architectural rendition of this legend is shown among the 13000 square feet of bas reliefs in a dedicated gallery at the Angkor Wat temple. The grand causeway entrances at the ancient city of Angkor Thom also depict the scenes from the churning of the ocean in sculptural form.

If you enjoyed reading about the churning of the ocean of milk, check our art travels to Cambodia: