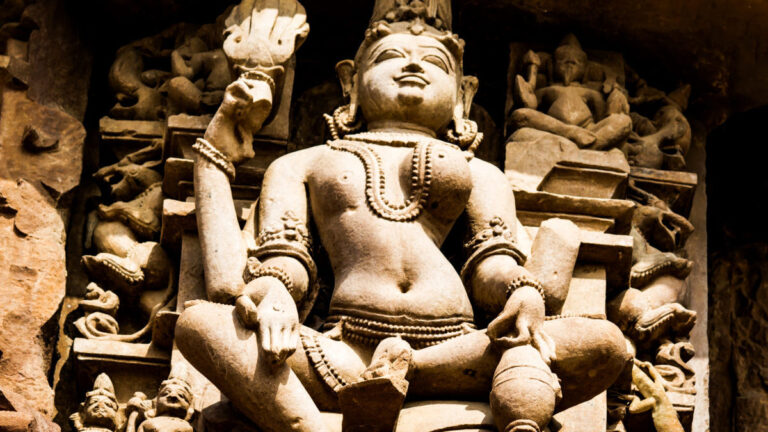 The Ardhanarishvara represents the reconciliation and harmonization of opposites; i.e. father and mother, spiritual and materialistic, active and passive, destruction and construction, and all other opposing dichotomies in existence. Shiva represents Purush, the male principle and Shakti represents Prakriti, the female principle. Purush and Prakriti are constantly drawn to one another and fuse with each other (like yin and yang). The union of Purush and Prakriti is believed to generate creation and ultimately the universe.

The left side of the body is associated with the heart and feminine attributes such as intuition and creativity, while the right side is associated with the brain and masculine characteristics such as methodical thought and gallantry. In most representations, the right half is usually Shiva and the left is Shakti though rare depictions of the Shaktism school portray the feminine on the dominant right side.

The male half is depicted with broad shoulders, a flat masculine chest, and muscular thighs. He has a wider body that may be smeared with ashes. He bears the recognizable aspects of Shiva such as serpents, matted dreadlocks, a crescent moon with the river Goddess Ganga flowing through his hair. North Indian images may portray the male aspect half-nude and ithyphallic, however, South Indian portrayals always have the loins covered with a garment. Half of the third eye may be on the male side of the forehead or a full third-eye may be shared by both halves of the deity.

The female half of the Ardhanarishvara is portrayed with a curvier feminine body as well as an exaggerated bosom and hips to emphasize the female form. She may be portrayed with white or green skin and her body may be smeared with saffron. She is adorned with traditionally feminine ornaments such as bangles and anklets. Though they differ in style, earrings are worn by both halves of the deity. Shakti’s hair is likely well-groomed with a basket-shaped crown on top. She may be portrayed with a tilak (red dot) on her forehead, matching Shiva’s third eye or just below the common third eye. A common halo may be depicted behind their head, though sometimes the shape of the halo may differ on either side.

Most Hindu deities are accompanied by an animal companion or vahana. Traditionally, Shiva’s mount is a bull and Parvati’s mount is a lion. The Ardhanarishvara is usually accompanied by Nandi, the bull as the common vahana. In some depictions, however, Nandi is depicted near Shiva’s foot, while the Parvati’s lion is near her foot. Parvati may even have a parrot perched on one of her arms.

Though
there are very few temples dedicated solely to the worship of the
Ardhanarishvara, historical data indicates the possible existence of a faction
of Hindus centered around the Ardhanarishvara in ancient times.  Though no such faction appears to be in
existence anymore, it is interesting to note that the Ardhanarishvara form
appears in most temples and shrines dedicated to Shiva all over South and
South-east Asia.