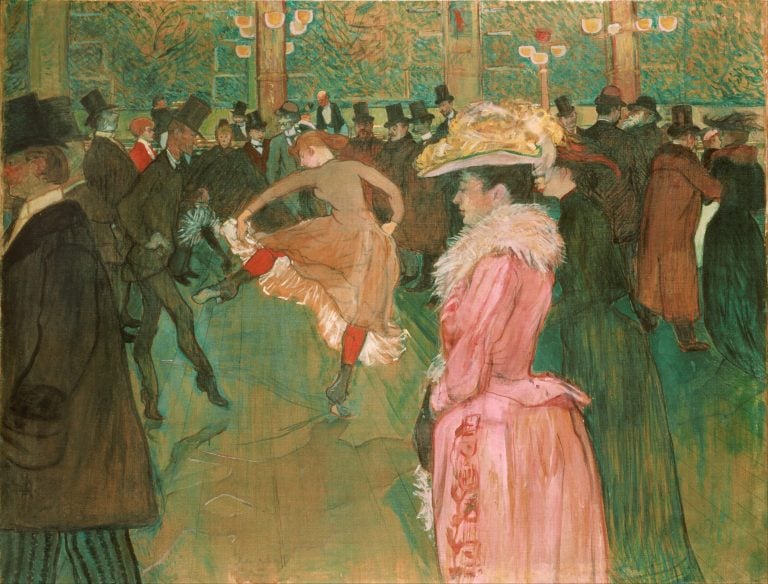 Tonight the Moulin Rouge is bursting at the seams. Men in dark coats and distinguished women dance and converse on the buzzing floor. Each has a story to tell, each has come here to enjoy themselves. The music rises above their voices, making it almost impossible to hear what they’re saying. Large, open spaces make room for more dancers to join. Is that an invitation to dance, monsieur Lautrec? Painted in 1890, At the Moulin Rouge, The Dance by Henri de Toulouse-Lautrec is the second painting in a series of artworks depicting the bustling nightlife of the famous cabaret hall. This painting hung over the bar at the Moulin Rouge after it was finished.

Henri de Toulouse Lautrec (1864–1901) was a French painter, printmaker, draftsman, caricaturist, and illustrator born into the aristocracy in the South of France. In his art, he was preoccupied with the decadents of society, directing his attention toward the late-19th-century bohemian lifestyle in Paris. Lautrec is considered a precursor of Expressionism, often viewed as a Post-Impressionist artist. He remains to this day an influential figure in advertising and book illustration.

Lautrec lived and worked for most of his life in the Parisian district of Montmartre, well-known over the years as an artistic and cultural hub. Many artists had studios in Montmartre, including Claude Monet, Pierre-Auguste Renoir, and later Pablo Picasso.

Like many of his contemporaries, Lautrec was inspired by Japanese woodblock painting. Ukiyo-e, meaning “pictures of the floating world”, is a genre of Japanese art that often illustrates places of leisure in Japanese culture. Lautrec was influenced by the simplicity of these colorful woodblock prints, from which he adopted the bold outlines and typical flatness seen in his artworks.

Ever Heard of the Moulin Rouge?

Opened in 1889, the Moulin Rouge (French for the “Red Mill”) is a Parisian cabaret hall, also known as the birthplace of the modern can-can dance. Parisians from all walks of life mingled at the lively nightclub, which spared seats for everyone, regardless of class. The Moulin Rouge was many things back in the day; it housed a dance hall and art gallery, an outdoor garden with slideshows, and even a fortune-teller!

The nightclub was one of Lautrec’s favorite subjects to paint. Many of his artworks depict scenes from the Moulin Rouge of people talking, dancing, and having fun.

The beautiful cabaret dancers were also part of the Moulin Rouge ensemble. When it first opened, Lautrec was commissioned to create posters for the cabaret. His designs focused on the performers, as seen in the poster below, in which he portrayed the famous dancer and creator of the can-can La Goulue (The Glutton) with her partner Valentine “the Boneless”. The four-color lithograph was made to advertise the dance hall, drawing inspiration from trendy Japanese woodblock prints.

The Magic of the Cabaret!

Lautrec animated this painting with lively imagery and a quirky color scheme. The aristocratic lady dressed in pink acts as a focal point for a diagonal line of occasional red accents that runs from the legs of the dancer in the middle ground to the coat of the waiter farther in the back, near the bar. Other elements of composition are the vertical columns in the back and the heavy chandeliers which illuminate the trees beyond. By rendering a whooping, inviting perspective, Lautrec welcomes the viewer among the crowds of the Moulin Rouge.

Furthermore, the murky green shadows contrast the lighter areas of the glossy dance floor, reflecting the shape of the dancers. There is a palpable tension between the complementary hues of red and green that dominate the painting.

On the back of the painting, an inscription reads “The instruction of the new ones by Valentine the Boneless.” Valentin le Désossé (or the Valentine “the Boneless”) was a famous dancer and contortionist. His real name was Edme-Etienne-Jules Renaudin. You will recognize him immediately as the tall, slender man, dressed for the occasion, dancing with a young lady. He is teaching her a new dance.

The other dancer is learning the can-can steps. She is the newest addition to the cabaret dance group. Her foot goes up in the air, revealing her white underskirt and red stockings. The young, red-haired woman is dressed modestly, wearing high-heel boots for the Bahut-cancan. However, her outfit shows her ankles – what scandalous attire for the period!

In the foreground, an aristocratic woman dressed in pink seems out of place. She has her back turned to us, facing the dancers. The lady is painted in profile, with her eyes cast down. In comparison to the dancers, she is self-contained and stiff yet elegant. Her presence is a reminder of the diverse clientele who frequented the Moulin Rouge.

Farther back, a bartender serves his customers. He is clearly busy conversing with a woman. Near him, one of the figures resembles a skeleton skull. Some art critics believe this was Lautrec’s father.

It is difficult, if not nearly impossible, to capture Lautrec’s fascination for the Moulin Rouge in only a few words. At the Moulin Rouge, The Dance is a passionate depiction of Parisian nightlife. If nothing else, Lautrec had rhythm, flair, and style. So, what are you waiting for? Put on some music and dance!