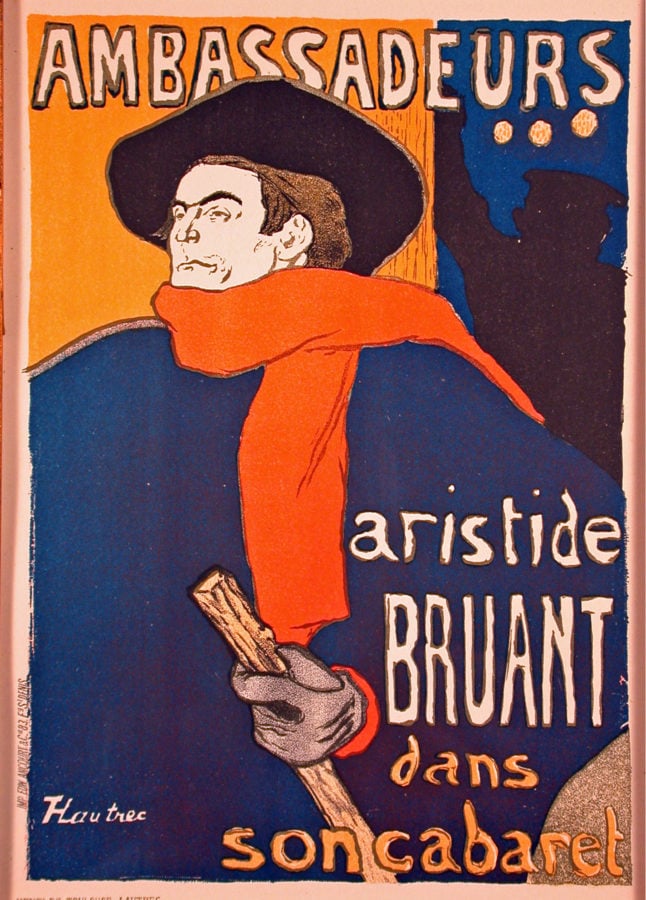 In a Cabaret with De Toulouse-Lautrec’s Posters

In the 1890s Henri de Toulouse-Lautrec was one of a group of young avant-garde artists whose color lithography was a vehicle for innovative printmaking. Lautrec eventually established himself as the premier poster artist of Paris and was often commissioned to advertise famous performers in his prints.

Aristide Bruant was a French cabaret singer, comedian, and nightclub owner. He always wore his wide-brimmed hat, red scarf, bulky cape, and tall boots when singing in a harsh voice of the violence and poverty in a Paris most of his audience never saw. This poster, commissioned by Bruant, is one of Toulouse-Lautrec’s most dramatic. The artist condensed the personality into three bold shapes symbolic of Bruant himself—black cape, red scarf, and black hat.

Bruant began performing at cafe-concerts and developed a singing and comedy act that led to him being signed to appear at the Le Chat Noir club. He soon became a star of Montmartre, and when Henri de Toulouse-Lautrec began showing up at the cabarets and clubs, Bruant became one of the artist’s first friends to be featured on certain famous posters by Lautrec.

Lautrec designed a sparse yet iconic image that promoted both the performer’s career as well as his own. We have also found something unique for you – Bruant’s voice. Here you can hear Aristide singing, on a record from 1912: