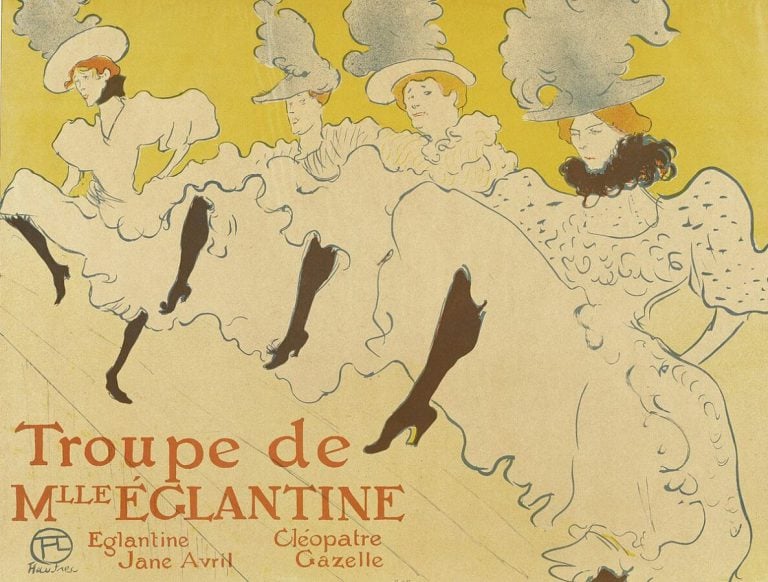 Can-can paintings depict the most famous dance of La Belle Époque era. Originating in France, the Can-can, associated with skirts, petticoats, high kicks, splits, and cartwheels became popular in the 1840s. Although originally danced by both women and men, it is now traditionally associated with a chorus line of female dancers at venues across Paris. Most famously, the Moulin Rouge and the Folies Bergère were the principal venues to see this dance.

Throughout the 19th century, people considered the dance scandalous. This was because the women wore pantalettes with an open crotch and the high kicks were intentionally revealing. Furthermore, the early Can-can dancers were most likely to be prostitutes. However, by the late 1800s, it was possible to earn a living as a dancer. Stars including La Goulue and Jane Avril emerged and were highly paid for their Can-can dancing appearances. Today, we’re going to look at some of the most famous Can-can inspired paintings.

Toulouse-Lautrec is one of the artists most synonymous with La Belle Époque. His large, colorful posters were popular and regularly commissioned for events throughout the 1890s. The French artist regularly attended the popular cafés, concert halls, and brothels of Montmartre. Above all, his posters are what most symbolizes this period. He took up lithography when technical developments in color printing were at a turning point. Consequently, this led to high and regular demand for posters for the Parisian bourgeoisie.

Toulouse-Lautrec created hundreds of prints and posters for collectors, theater programs, books covers, and Can-can performances. Can-can dancer, Jane Avril, commissioned this poster, which has become one of the most recognized Can-can paintings of the era. Toulouse-Lautrec made it to promote Avril’s appearance in the Troupe de Mademoiselle Eglantine at London’s Palace theater.

Can-can at the Moulin Rouge by Wojciech Weiss

Polish painter and draughtsman of the Young Poland movement, Wojciech Weiss lived in Paris between 1899 and 1900. He painted his composition of the Can-can during this stay. He became one of the most well-known exponents of, and contributors to the artistic work of La Belle Époque. Above all, he successfully presented the decadent lifestyle gaining momentum in Paris at the turn of the century. Principally, he was influenced by the Polish novelist, Stanisław Przybyszewski’s writings. The writer summed up the era in which the Can-can thrived:

“new satanic churches were created, all these Moulins Rouges, Orphea, various ballrooms. The fantastic dance of witches has changed, transformed into a cancan […] “.

Weiss’s colorful Can-can painting, set inside a crowded parisian nightclub, successfully recreates the stuffy atmosphere and vibrancy of the space.

French Post-Impressionist artist Georges Seurat painted this piece between 1889 and 1890. Le Chahut, literally meaning noise or uproar, is an alternative name for the Can-can. The painting, showing a fanciful quadrille on the stage of a Montmartre café, depicts the provocative, sexually charged dance. Above all, the painting, with its light, warm colors, and ascending lines, influenced the Fauves, Cubists, Futurists, and Orphists, who received the work with glowing reviews.

Notably, the painter employed the technique of pointillism,(of which he was the founder), to create this artwork. He did this by using only seven colors, which he dabbed in small circles. They are so close to one another that the eye naturally blends them together.

Francisco Nicolás Iturrino González was a Spanish Post-impressionist painter. In 1883, after moving to Liege in Belgium to study engineering, he soon realized that his passion was for painting. As a result, he gave up his studies to devote himself entirely to art and moved to Paris in 1895. It was there that he discovered all the city of lights had to offer, including; the parties, the decadence and the Can-can. His Can-can painting captures the dancers’ provocative clothing. Above all, it represents the break made with Victorian values, which considered it unthinkable for a woman to show even an ankle.

At the Moulin Rouge by Henri Evenepoel

Belgian artist, Evenepoel, was another exponent of Paris’s Belle Époque, and documented the era through his art. Firstly, he studied in Brussels and later entered Paris’s Ecole des Beaux-Arts in 1892. He continued to live and work in Paris upon graduating. Closely associated with Fauvism, he worked mostly by mixing somber palettes with bold pops of color to illustrate his scenes.

For instance, in his painting At The Moulin Rouge, he merges the somber tones of the café with the brighter colors of the Can-can dancers. As such, he captures the decadence of the Parisian nights of this era, full of life but set against an atmospheric backdrop. Sadly, he died from typhus in Paris only a couple of years after painting this scene, at the age of 27.

French painter, Domergue, became famous in the 1920s for his groundbreaking portraits of parisien women. Many of his subjects were actresses, dancers, socialites, and aristocrats. Portraying these women as elegant, slim, and graceful, he boasted “I am the inventor of the pin-up girl”. With an impressive catalog of 3000 portraits, the artist played an essential role in the evolution of fashion during this time.

For example, in Le French Can-Can, he captures the extravagant Can-can costumes of the time. Furthermore, he encapsulates the light, frivolous, and cheerful nature of the women themselves. As such, he symbolizes the beginnings of the feminine revolution, whereby women enjoyed a sense of freedom and entitlement which they had never before had. Domergue’s classical artistic background and his flair for fantasy make his Can-can paintings unlike any other.

Swedish painter Törneman’s addition to this body of work on Can-can paintings offers a different stylistic take on the French dance. Painted with strong colors in short brush strokes, it is a clear break from the more Fauvist and Impressionist style of paintings of this era.

The artist was one of the earliest Swedish artists to visit Paris and soak up its indulgent culture. His time living there between 1902 and 1905 became a period of experimentation in color and motifs. Above all, he wanted to capture Paris’s energetic nightlife. His Can-can dancer brilliantly encapsulates the zest of the dance, with its frilly petticoats, famous high kicks and rousing music.

Follow the loud sound of Can-Can and read more about the French Belle Epoque in:

Have you ever looked upon Gustav Klimt’s portrait of The Lady in Gold and wondered why she was so worshipped? What made the artist immortalize her...