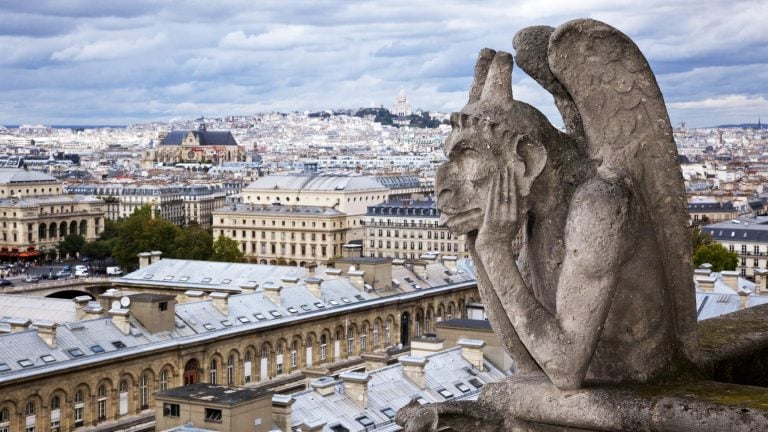 A grotesque on the façade of Notre Dame Cathedral, Paris, France. The Daily Beast.

Everybody loves gargoyles! I used to think I was alone in this, but I’ve come to learn that’s not at all true. In case any of you don’t know, a gargoyle is a carved human, animal, or monster figure on the outside of a building, and it has a very specific function that you’ll learn about below.

Gargoyles are most commonly associated with medieval European churches, where they are plentiful, but they also appear on all sorts of other buildings around the world and throughout time. Medieval gargoyles are often quirky looking, which is a huge part of their charm and appeal. They may be comical, cute, or scary, but they’re never dull. Whether you’re a long-time gargoyle lover or have only just discovered them, you’ll enjoy the following five facts about these curious creatures.

Glamorous, right? It might be difficult to believe, but gargoyles are simply decorated ends to buildings’ gutter systems. Water drains off the roof, through the gutters, into the gargoyles, and out holes in their fronts. The gargoyles stick out from the sides of buildings, so the water lands away from the body of the building. This function is how gargoyles get their name, since the word “gargoyle” comes from the Latin gargula (throat) and the French gargouille (gurgle). However, the tradition of carving drain spouts in the shape of animal heads or bodies is ancient – far older than this name and the Middle Ages.

The most popular gargoyles are usually the strange monsters and hybrid creatures, but gargoyles can also be ordinary people and animals. No matter their shape, most gargoyles have holes in their mouths where the water exits. Sometimes, as is shown above, pieces of pipe are visible in their mouths. However, some human or animal gargoyles dispose of water using less polite body parts. Because they spew water, gargoyles are fun in freezing weather.

2. No one is exactly sure why gargoyles look the way they do

Gargoyles most frequently appear on medieval churches, but they are far from holy looking. Some of them are actually rather profane. Many people find it strange that such monstrous creatures are so common on sacred buildings. How can this be? Even specialists in medieval art history aren’t really sure, though they’ve posed a few good theories.

One suggests that the hideous forms of gargoyles are meant to protect the church from evil, while another believes that the presence of demons-like images might have been intended to scare the common person into entering the church, praying, and living a pious life. Such scare tactics are well recorded in other aspects of medieval art and architecture. A third popular theory states that employing demons to do the necessary work of draining the church’s roof shows Christ’s triumph over the forces of Satan. There are some other ideas as well. All of them are plausible, but none has currently gained full acceptance.

3. Legend has it that the first gargoyle was a French dragon

According to a legend, the world’s first gargoyle was a dragon who was causing problems for the town of Rouen, in France. The locals had to give in to the dragon’s demands for human flesh to eat until a priest arrived in the then-pagan town. The priest offered to defeat the dragon if the people of Rouen would convert to Christianity in exchange. Sure enough, the priest was able to tame the dragon with his Christian faith, and the townspeople duly converted to Christianity. They burned the troublesome dragon and stuck his charred corpse on the outside of their new church to show the victory of Christianity over evil.

Therefore, this dragon, named “Gargouille”, was the first-ever gargoyle. This legend was probably invented much later to give a Christian explanation for the established gargoyle tradition. The now-lost origin of medieval gargoyles likely has nothing to do with this. But it’s definitely a fun and memorable story.

Remember how we said that gargoyles are fancy gutters? Well, many of the critters we commonly know as gargoyles don’t serve that purpose. They’re purely decorative instead, so they’re not actually gargoyles. Figurines that look like gargoyles but have no function are called grotesques. And they’re everywhere. They’re actually far more plentiful than true gargoyles. You can often tell the difference because grotesques typically lack an open mouth or another place for water exit, which is necessary in a gargoyle. But I’ve met some sneaky grotesques that have really fooled me.

The figure shown above, from Notre Dame Cathedral in Paris, is probably the first image that comes to mind when many people think of the word “gargoyle”, but it’s not really a gargoyle at all. It’s also not really medieval. It’s actually a grotesque that was added during Notre Dame’s restoration in the 19th century. Gargoyles became very popular in the 19th century, thanks to the Gothic Revival movement, the restoration of medieval churches, and Gothic novels like Victor Hugo’s Notre-Dame de Paris (1831). They’ve never really left the public imagination ever since them.

Gargoyles may be most associated with the Middle Ages, but they’re still in style today. Many structures built in recent years include imaginative gargoyles and grotesques, and you can now find gargoyles all over the world! Some truly notable examples are on the Washington National Cathedral in Washington DC.

There, all of the 112 exterior figures were hand-carved by skilled artists, just like they would have been in the Middle Ages. Many of the gargoyles represent different types of people and animals, like the bishop shown above. There’s a series representing each of the US states. But the cathedral’s best-known decoration is probably its grotesque figure of Darth Vader, which was designed by a boy who entered the cathedral’s contest. Over the past century, the idea of gargoyles has also inspired an animated television series, been embraced by the Gothic subculture, spawned a host of products, and much more. Gargoyles are all around us, and I couldn’t be happier about it.

You can learn more about gargoyles in Field Guide to Gargoyles – a five-part series on my own website.