Tutankhamun in London: Treasures of the Golden Pharaoh 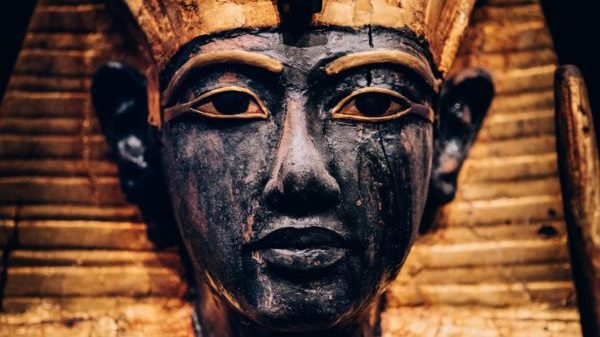 Wooden Guardian statue of the Ka of the King wearing the Nemes headcloth (IMG).

For the first time in decades, the treasures of Tutankhamun – who ruled over Egypt from approximately 1334 – 1325 BCE – are on display in the United Kingdom, and this time at the Saatchi Gallery instead of the British Museum. This is part of a tour around the world (Los Angeles, Paris, London and Australia) before the treasure trove of original artefacts return to Egypt forever, where they will be housed in a shiny new museum in Giza. So, if you live in the vicinity of London, make sure to take advantage of this possibly once-in-a-lifetime opportunity!

With tickets ranging from £16.50 (off-peak child) to £28.50 (peak adult), this isn’t a cheap exhibition, but I can confirm that it is definitely worth forking out for. With a total of five galleries and over 150 items on display, you certainly get your money’s worth. The exhibition begins with a cinematic video about the life of Tutankhamun – a boy king who died before he turned 20 – and the discovery of his forgotten tomb by British archaeologist Howard Carter in 1922. This bit of historical contextualisation is interesting and important, and if anything it could have gone into more detail in places, but nothing beats seeing the objects with which Tutankhamun was laid to rest in the flesh, as it were. Across the ages, they speak for themselves.

If you’re hoping to see the young pharaoh himself, you might be disappointed, but the sheer range and splendour of artefacts displayed here more than makes up for this. Accompanying text expands on the meaning and purpose of each item, if you can crane your neck over the crowds of people to read it. The final room, meanwhile, provides a timeline of events relating to Tutankhamun and the discovery of his horde.

From statues to boomerangs, Tutankhamun: Treasures of the Golden Pharaoh is marked throughout by the astonishing variety of items on display. It gives visitors a sense, even if it’s only an inkling, of the vastness of Ancient Egypt’s wealth and culture. For however long it takes you to look around the exhibition, you will get a small sense of what life – and indeed death – was like as an ancient Egyptian ruler.

Tutankhamun: Treasures of the Golden Pharaoh presented by Viking Cruises runs at the Saatchi Gallery until 3 May, 2020. Tickets are on-sale now via www.tutankhamun-london.com

Man, Woman or Both? Meet Akhenaten, The Only Androgenous Pharaoh

Fowling in the Marshes. One of the most famous tomb paintings from ancient Egypt