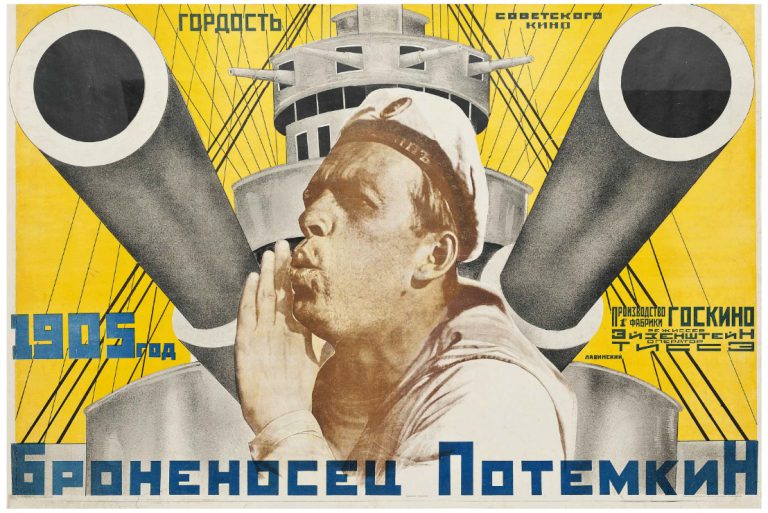 Constructivism originated in Russia in 1915 and its creators were Vladimir Tatlin and Alexander Rodchenko. It promoted using industrial assemblage materials, as there was no place for decoration and stylization. Constructivists considered art as a means for propaganda and were associated with socialism, the Bolsheviks, and the Russian Avant-Garde. As a movement with great influence on others (Bauhaus, De Stijl), it also reached other forms too, such as architecture, sculpture, fashion, cinema, etc. The Bolsheviks were very interested in the latter as a way to promote the goals of the revolution. So, Constructivism and Soviet cinema went hand in hand and produced very interesting films.

First of all, Constructivism is a very austere and abstract movement that didn’t last for very long. It appeared in 1915 and lasted up to around the mid-1920s. Basically, constructivists believed that art should reflect the modern industrial world. Hence they disapproved of any kind of stylization. In the service of the Bolsheviks, they wanted to create a brave new world based on Socialism and industrial society. So the artists used modest, industrial materials to create geometric forms. Also, Constructivism is often associated with the work of Wassily Kandinsky and Naum Gabo.

Cubism, Futurism, and Suprematism had a great influence on Constructivism. Actually, Tatlin saw Picasso‘s Cubist construction (Construction 1914) and it inspired him to create his own. However, his were completely abstract and made of industrial materials. By 1917, he had started conceiving the idea of a monument for the current turbulent social changes. In 1919, he developed the design for the Monument to the Third International, commonly known as Tatlin’s Tower.

Tatlin’s Tower became an icon of Constructivism. It inspired many artistic forms and societies, such as cinema. Actually, many movies have referenced the sculpture.

During the first years of the revolution, the situation of the cinematic industry in Russia was terrible due to the absence of technical infrastructure. Besides, the civil war had created a sense of chaos in general. Nevertheless, cinema actually evolved through certain state initiatives. The Bolsheviks considered cinema as a great way to promote the revolution. In 1919, Vladimir Lenin nationalized cinematic production. At the same time, the Moscow Film School (today known as Gerasimov Institute of Cinematography) was founded. Its primary goal was to educate new directors on propaganda documentary making. The movies were epic, optimistic, and fast. Typically, the actors were amateurs and the locations were authentic places.

The establishers of Soviet cinema were Lev Kuleshov and Dziga Vertov. They showed an interest in both the theory of cinema and practice. They incorporated Constructivism in Soviet cinema in the form of montage. Montage became the most important structural element, along with the lack of pristine film.

Dura Lex (1926) is Lev Kuleshov’s most important movie. Even though it didn’t have great success, it is a pillar in Kuleshov’s cinematography. It is a great synthesis of emotion, theatricality, and geometric set design.

Man with a Movie Camera

Man with a Movie Camera (1929) is Dziga Vertov’s biggest accomplishment. The documentary turns into Avant-Garde poetry with an experimental and powerful montage. Moreover, he connected many mini-films and the result is very artistic. See the trailer here:

Battleship Potemkin (1925) is probably the most famous movie in Soviet cinema. It is Sergei Eisenstein’s masterpiece. His montage has a great dynamic. Most of the time, one scene succeeds the next one with many contrasts. In one scene, people move from the right to the left side, and in the next, they move in the opposite direction. Also, Eisenstein, as an architect, paid a lot of attention to the geometry of each scene. Discover its trailer!

Alexander Dovzhenko, the director of Zvenigora (1928), didn’t count on montage as a primary means. On the contrary, he created a poetic atmosphere with an unconventional technique. However, this cost him cohesion problems in all his movies, not only in Zvenigora.

There many more notable movies to watch. However, Constructivism as a movement, in general, declined fast, ceding its place to Suprematism and Social Realism in the 1930s.