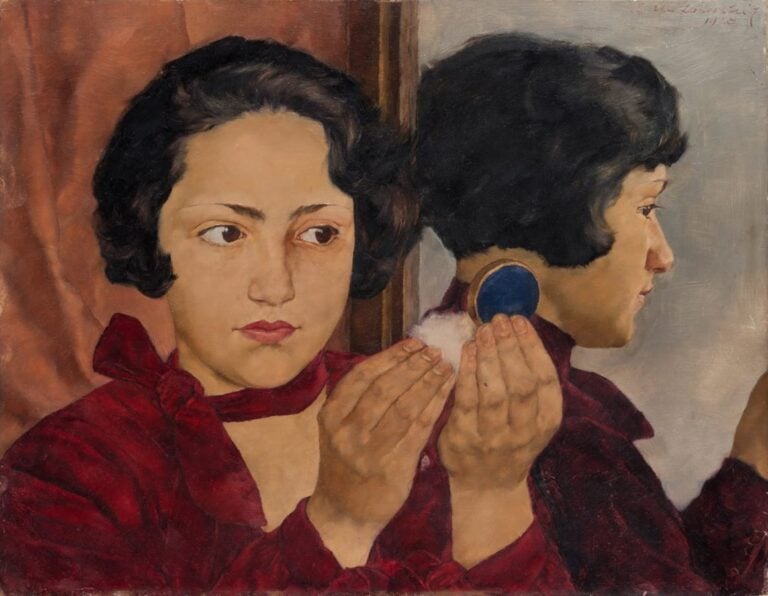 Happy Women’s History Month to all women and men (in the end men should celebrate with us)! I hope that with each passing year the world becomes a more hospitable place for all women and that soon we will be able to claim equality regardless of sex. In many sectors and environments women are still discriminated against, among them the art world. Therefore, today we will show you three brilliant but erased women artists of the Vienna secession and New Objectivity movement who nowadays are still often omitted.

Broncia Koller-Pinell (1863-1934) was a painter born in Sanok in Galicia to orthodox Jewish parents who let her begin private sculpture studies at the age of 18. After spending five years in Munich, in 1888 she showed her works at the International Art Exhibition in Vienna. However, her first successful exhibition took place in 1892 at the Künstlerhaus in Vienna.

Against her parents’ will she married a Catholic, Hugo Koller, with whom she had two children, raised as Christians (Koller-Pinell did not convert). Starting in 1903, the family became involved in the activities of the artistic groups Wiener Werkstätte and Secession, inviting many members of both groups to their house. Koller-Pinell was especially close to Klimt (which is also visible in her style) and exhibited with the Secession. Although she was professionally successful and appreciated by critics, too often she was labeled as “the talented wife of a prominent husband” (Gütersloh 1934), who was a physician. In fact, her artistic freedom was tolerated by the Jewish community only because of her high social status. This, however, led to her ostracism in the art world; she was never really accepted among her colleagues because she was a woman and because she was rich. In her art Koller-Pinell mostly focused on still life, genre, and portraits (one would say, typically feminine genres).

Lotte Laserstein (1898–1993) was born in East Prussia to a bourgeois family. Her aunt Elsa Birnbaum ran a private painting school which allowed Lotte to take up painting and drawing at a young age. After this initial education she was admitted to the Berlin Academy of Fine Arts. There she completed her master’s studies as one of the school’s first female attendees. In 1928 her career sky-rocketed as she gained widespread recognition and sold her first works. However, after 1933 and the seizure of power in Germany by the National Socialists, her art was considered degenerate. She was subsequently dismissed from the board of the Association of Berlin Women Artists. Her living conditions were dire but thanks to the Galerie Moderne in Stockholm she was able to leave Germany.

Although she worked there as well, she never recaptured the fame she had in her heyday. Laserstein produced mostly portraits, many of herself and a recurring model Gertrud Rose (née Süssenbach), who was her closest friend. To Lotte, she embodied the type of the “New Woman” and was so represented: as an androgynous emancipated lady with bob and loose clothes. You can see her work in March in the Städel Museum in Frankfurt, which is hosting an exhibition on her.

Another erased woman artist is Theresa Feoderovna Ries (1874-1956). She was an extremely successful artist of the Vienna circles. Although her career initially began with her being kicked out of the Moscow Academy of Art for talking back to a professor, her first exhibition in Vienna attracted the attention of the Emperor himself.

Overnight she rose to fame at the age of 21. Despite many links with the monarchy (for example, the Prince of Lichtenstein gave Ries a suite of rooms next to his picture gallery to use as a studio), she also befriended members of the Secession (Klimt invited her to exhibit with the Secessionists at the Paris World’s Fair in 1900). Ries knew that as a woman artist she needed publicity and she was very effective at self-promotion (she even published a memoir in 1928). However, as a Jew in Vienna she didn’t have an easy life during the Nazi reign in Austria. She stayed in Vienna until 1942 when she left for good and post-war Vienna ignored her contribution to the development of Austrian sculpture.

If you want to read more on erased women artists from the period of Art Nouveau, check out the book The Memory Factory: The Forgotten Women Artists of Vienna 1900 by Julie M. Johnson.