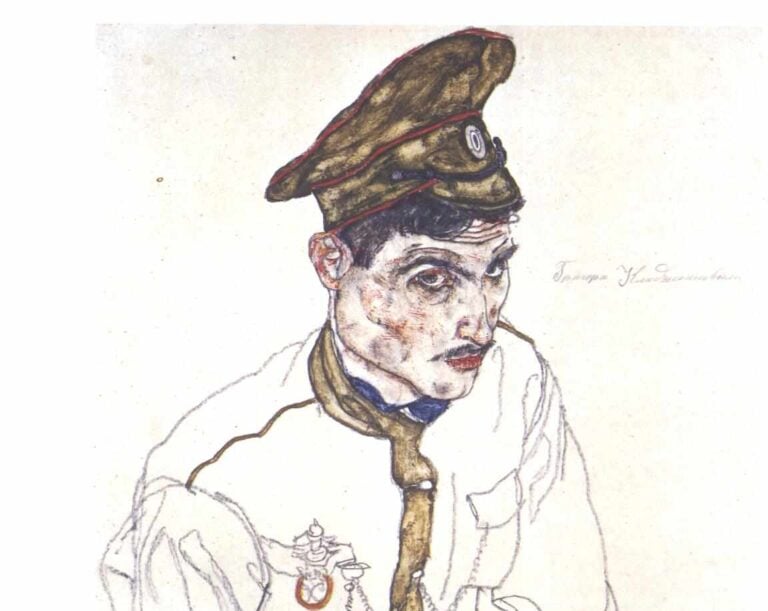 Art of the Spanish Civil War: Political Propaganda and the Modernist Avant-Garde

Today we commemorate the anniversary of the end of the Great War. On this occasion we want to present you with artists who enlisted as soldiers during the war and hence pay our tribute to all souls who were lost in this terrible war.

Kirchner never fought as he was clever enough to sign up as a volunteer to serve as a driver in order to avoid being drafted into a more dangerous role. However, after suffering panic attacks and due to issues with his mental health, he was soon declared unfit for service and was sent away to recover. Self-Portrait was painted during that recovery. It shows him with an amputated arm and wearing a military uniform despite being in a studio. In this way Kirschner tried to face his fear of impotency as an artist, a soldier, and a man.

In 1915 artist Egon Schiele went to war. He survived the fights but lost his battle with influenza which took over Europe after the war and killed more people than the war itself. The 28-year-old Schiele along with his wife Edith were two of its approximately 40 million victims.

The Futurists declared war in The Futurist Manifesto as “the world’s only hygiene”. Because of such extreme views many of the Futurists enlisted in the army when Italy joined the war in 1915. Two of them lost their lives: Umberto Boccioni was wounded and died 1915 and Antonio Sant’Elia died in the battle of Monfalcone at the age of 28 in 1916. Meanwhile Filippo Tommaso Marinetti was scarred by his experiences fighting in the mountains of the Trentino region and he was severely wounded in 1917.

Dix’s series of war images is one of the most poignant depictions of the disasters of WW1. He executed these prints between 1923 and 1924 in a technique of etching and aquatint, in which acid etches a metal printing plate, in order to heighten the visual effect of decay and degradation of the post-battle landscapes. Dix experienced the horrors first hand; he served as a machine gunner from 1914 to 1918 and saw combat on both the Eastern and Western fronts.

This French sculptor and painter lived and worked in Britain where he shared the radical modernist views of his friends the Vorticists, Ezra Pound and Jacob Epstein. When the war began he joined the French army and was so brave in combat that he received a decoration for bravery before being killed in the trenches at Neuville-St.-Vaast at the age of 23. His lover Sophie Brzeska became distraught after his death and died in an asylum in 1925.