Paint Me Like One of Your French Girls: The Life and Business of Agostina Segatori 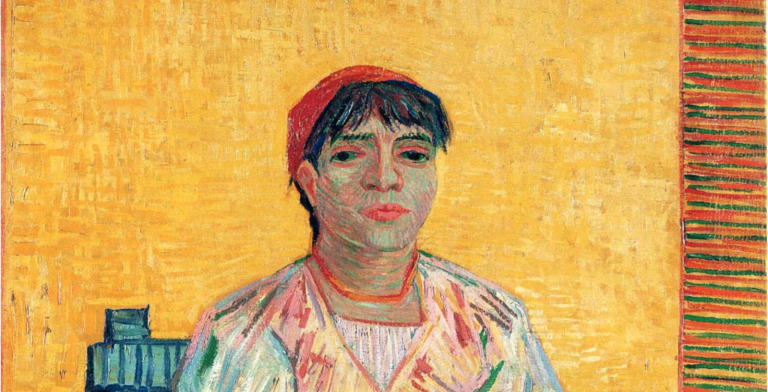 Agostina Segatori's face is most widely recognized in the works of key artists between 1860 and 1887. Her Italian features inspired many painters in Paris at the time, leading to an enviable career. However, her achievements are far greater than her modelling success. Navigating the web of stories that surround her, we journey through Segatori's life and consider her business as a valuable platform for her male counterparts.

Little is known about Segatori's life before she moved to Paris. Aside from her birth in Ancona, Italy, in 1841, most of what we know begins with her modelling ventures. Her career began in 1860, when she posed for Édouard Manet's piece L'Italienne and built a reputation from there. Over the next three decades, she went on to model for Édouard Joseph Dantan, Jean-Baptiste Corot, Jean-Léon Gérôme, Eugène Delacroix, and Vincent van Gogh.

Segatori's bond with Dantan was not solely professional. The pair had a relationship for twelve years, which was widely understood to be an affair. Dantan is believed to have referred to her as 'Madame Segatori-Morière', thus implying she was married to a Mr Morière. The pair had an illegitimate son named Jean-Pierre. Ultimately their romance was described as stormy and ended in 1884. Despite the challenges of motherhood and a failed relationship, Segatori continued to work and save the money she earned from modelling. In 1885 she invested her savings in a business that would become a hot spot for artists, writers, and critics: Café du Tambourin.

"It was around this time that Vincent frequented a tavern called "the Tambourin" . . . held by a very beautiful Italian, former model, displaying in a counter of her own her healthy and imposing charms."

The restaurant had an Italian theme and became increasingly popular among Parisian creatives. Regular visitors included the likes of Paul Gauguin, Norbert Goeneutte, Emile Bernard, Louis Anquetin, and Henri de Toulouse-Lautrec. Initially located at 27 rue de Richelieu, it re-opened later that year at 62 Boulevard de Clichy. To advertise its re-opening, esteemed poster artist Jules Cherét created a poster featuring Segatori. She holds a tambourine-shaped tray in her hands, nodding to both the name and interiors of the restaurant.

"It was Madame Ségatori, owner of the Tambourin, who brought together, with an artistic feeling, the works of the masters who transformed her establishment into one of the most interesting galleries of paintings that could be made."

As well as quirky decorations, the restaurant walls featured creations from many of the artists who gathered there. In Café du Tambourin, artworks were sometimes a form of economy, and an interesting part of the relationship between Segatori and her next lover. Since moving to Paris in March 1886, Vincent van Gogh frequented the restaurant and developed a romantic relationship with its owner. During their brief affair, which lasted from December 1886 to May 1887, van Gogh would exchange still life paintings for food. Segatori also enabled him to organize an exhibition at Le Tambourin, in which he presented his collection of Japanese prints.

"Vincent, according to a contract of a few paintings a week, ate at the Tambourin . . . This lasted several months."

Agostina Segatori in Le Tambourin (1887) was probably painted during the exhibition, as van Gogh's Japanese prints can be seen in the background. He depicts Segatori alone, drinking her second beer and smoking a cigarette in public, which has controversial readings. Although many would have disapproved of the act, often implicit of prostitution, Segatori can alternatively be seen as the epitome of a modern woman. She sits in her own restaurant, dressed in fine clothing, surrounded by an exhibition of artworks that she provided a platform for. Once a model, reliant on the wage of the artists she posed for, now a business owner profiting from them.

"You can be sure of one thing, and that’s that I won’t try to do any more work for the Tambourin. I think it’s going to change hands, too, and of course I’m not against that."

Sadly, Segatori's business later declined. She fell into a large amount of debt and the restaurant, along with the many artworks featured on its walls, was repossessed. Segatori seemingly didn't recover from the financial downfall, suffering from ill health from then until her death in 1910.

"As far as Miss Segatori is concerned, that’s another matter altogether. I still feel affection for her and I hope she still feels some for me. But now she’s in an awkward position. She’s neither free nor mistress in her own house, and most of all, she’s sick and ill."

Although Segatori's story does not have a particularly happy ending, her achievements are still worth noting. She followed an alternative path from other models of the era, transgressing from passive muse to active proprietress, and lived an unconventional life. Unafraid to follow her passions, both romantic and professional, she was a modern woman in many ways. Exhibiting works among the buzz of Paris' creative scene, Segatori watered the blossoming careers of painters we still love today.

Read more about female patrons of the arts: