Painting of the Week: Vincent van Gogh, Bridge in the Rain (after Hiroshige) 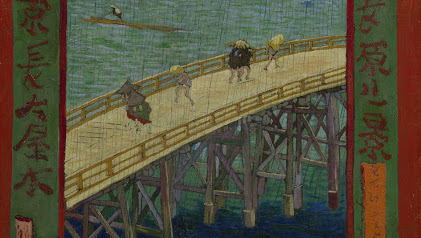 In the mid 19th century, Japanese ports were suddenly opened up to international trade, and Europeans went crazy for Japanese culture and art, especially woodblock prints. A new word in French, Japonisme, was even created to describe this mania for art from the East. Expressionist painter Vincent van Gogh was inspired by Japanese prints and even directly modeled his painting Bridge in the Rain after a work by legendary artist Utagawa Hiroshige.

Ukiyo-e prints (literally translated to “pictures of the floating world”) flourished in Japan during the Edo period. The subjects of these works included the stars of middle class entertainment – sumo wrestlers, kabuki actors and geishas as well as beautiful landscapes. Van Gogh never visited Japan, but in 1887 he left Paris and traveled south to Provence and he said the landscape of southern France reminded him of what he had seen in Japanese prints. It was here that van Gogh decided to copy the bright colors and intriguing flatness of Hiroshige’s Sudden Shower over Shin-Ohashi Bridge and Atake.

In van Gogh’s Bridge in the Rain, the colors are brighter and the people on the bridge further away from the viewer. But in both works, the eerie blue of the sky makes the sudden rain shower seem dangerous, possibly a reminder of the unpredictable power of nature. By studying and mimicking the unusual pairings of color in Hiroshige’s woodblock prints, van Gogh found a new way to elicit strong emotions in the viewer, something especially important to an Expressionist artist like van Gogh.

If you like the Bridge in the Rain both by Hiroshige and van Gogh, read the following: