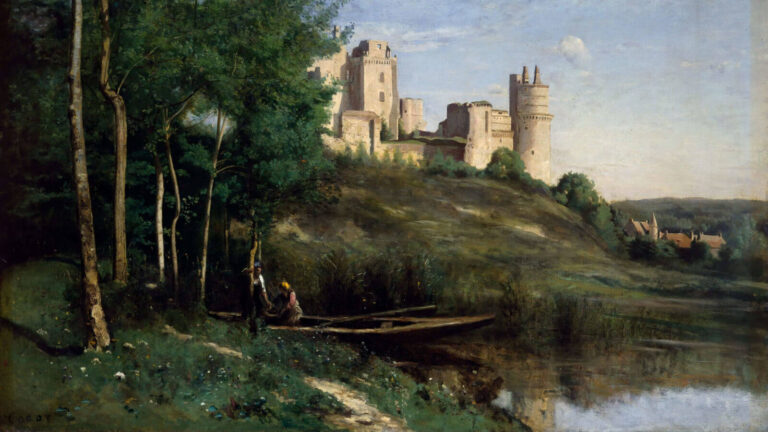 Escape to the Forest: The Birth of Barbizon School

Jean-Baptiste-Camille Corot was a member of the Barbizon School, which flourished from the 1830s to the 1870s in France. The school was named after the small village of Barbizon about 30 miles (48 km) southeast of Paris, where many artists, including Corot, painted. The Barbizon School rejected the classical conventions of Claude Lorrain and Nicolas Poussin and embraced the direct observations of 17th century Dutch landscapes and the works of English contemporary John Constable. In art history, the Barbizon School is interpreted as a transitional bridge between 18th century Classicism and 19th century Impressionism.

The painting is very picturesque with its castle on a hill overlooking the village and water below. By capturing the castle from a low perspective, the castle looms over the landscape and dominates the painting’s composition. Its placement hints to its medieval origins because medieval society was very structured and hierarchical. The medieval lord was at the top of the social order, ruling over his domain. However, the castle is in ruins. Walls are crumbling, and roofs are missing. Like medieval society, it is a former relic. Corot therefore comments on the normal, acceptable, and inevitable cycle of life.

Corot explores the sense of nostalgia in Ruins of the Château de Pierrefonds. During the 19th century there were themes of loss and decay scattered throughout its paintings as people reflected on the lost lifestyles of pre-industrialisation. The Middle Ages, pastoralism, and ruralism became symbols of a missed era. The inclusion of peasants in the foreground hints at this romantic ideology. What are the peasants doing? Are they fishing? Are they picking fruit? One does not know as their hands are blurred. However, one knows that they are most likely peasant women because of the bright blue and yellow fabrics in their hair. What better symbol to explore romantic feelings than a small northern French town with a medieval castle fallen into ruins, surrounded by working peasants and beautiful landscapes?

What is further interesting about Corot’s painting is the visual blending of Beaux-Arts and Impressionist styles. The flowers, clouds, and trees are very impressionistic with their unmixed dabs of color. However, the architecture of the medieval castle and village buildings are so precise and sharp. There is almost a tension of blending feeling and reason. John Constable, who Corot and other Barbizon School artists admired, once said that “painting is but another word for feeling,” and this is so applicable in Corot’s painting. This is not an impartial objective view of some random location. The subject, style, and feelings are all deliberate and intentional.

Ruins of the Château de Pierrefonds captures the spiritual, moral, historical, and philosophical issues of mid-19th century France. Was the medieval era a greater time? If so, did the French fall from this believed greatness? Was the rigid society of pre-industrialization better than the social mobility of post-industrialization? Is the secularization of France and its less Christian observances an improvement or a deterioration? These are all questions provoked by a deeper analysis of this and many other Barbizon School paintings. Ruins of the Château de Pierrefonds is not just a pretty landscape.

Composition with Red, Blue and Yellow is a golden example of Abstraction, De Stijl, and Constructivism. It purges the art of individual subjects by...