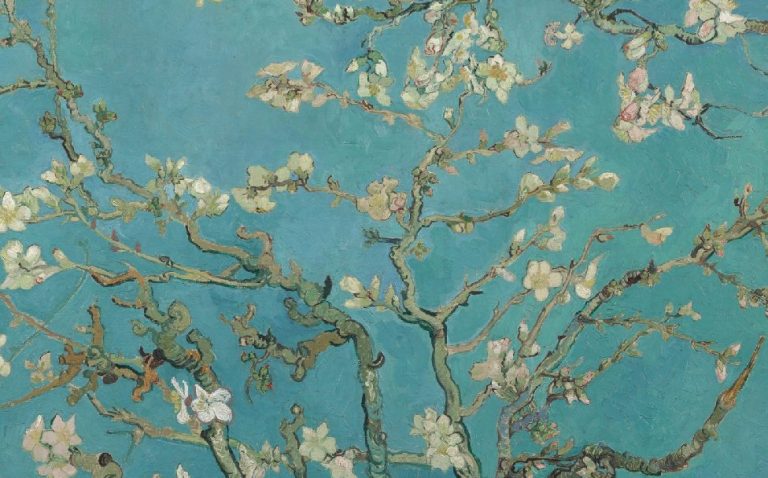 Vincent van Gogh only sold one painting during his lifetime. He was not a financially successful artist, and he was entirely dependent on his brother, Theo, to monetarily support his artistic vision. Vincent had a great love and appreciation towards his brother. He knew he could not pursue becoming a painter without Theo’s support. Almond Blossom was a gift from the talented artist to his beloved brother.

Vincent van Gogh painted Almond Blossom in February of 1890 in Saint-Rémy-de-Provence, France. It was early spring in the south of France, and the almond trees were blooming. Their bright white flowers were contrasting against the cold blue sky. The almond tree branches were full of renewed life as the surrounding landscape was still empty and frost-bitten. This beautiful image of rebirth and new life is exactly what Vincent van Gogh captured in his painting Almond Blossom.

Van Gogh painted Almond Blossom in celebration of his nephew’s birth. Theodorus van Gogh, affectionately known as Theo, was the proud father of the boy and named his son Vincent Willem van Gogh. It was a touching tribute, and the painter was obviously moved by the gesture as he gifted Almond Blossom to Theo, his sister-in-law Jo, and little baby Vincent. It remained in the family, and was never placed in Theo’s art gallery in Paris where other Vincent van Gogh pieces were displayed for unsuccessful sale. However, despite not selling a single piece of his brother’s works, Theo regularly sent Vincent money to support his artistic pursuits.

Almond Blossom is a great artistic achievement. It is stylistically influenced by the Japanese prints that were popular in France during the late 19th century. These Japanese woodcuts were bold in line and color and sometimes featured strong outlines and a limited color scheme.

Almond Blossom does not feature any distracting mid-ground or background. The entire composition is in the foreground against a simple and solid background. Like an intense shadow or silhouette, Almond Blossom has a very strong outline. The Japanese influence is apparent. Furthermore, Almond Blossom has a very limited color scheme like a Japanese print. It has mostly tints and shades of blue and white with small hints of yellow and red to add warmth to the piece. However, while the colors may be limited they are vibrant and bold. Almond Blossom fuses the strong colors and bright lights of southern France with the bold lines and limited palette of Japan.

Van Gogh painted Almond Blossom only five months before he died in July of 1890. However, Vincent painted many pieces in the months leading to his death. During the 19 months when he lived in and around Arles, he painted 255 images. This staggering achievement amounts to an original painting every two to three days for over 570 days!

Vincent was extremely prolific when he painted Almond Blossom for his brother’s family. He painted endlessly and transitioned from Impressionist origins to the beginnings of Expressionism. Almond Blossom is a deceptively simple painting. However its deceptive simplicity is what makes it deliciously enjoyable to view. It is bold, fresh, and bright. It is life itself. It is baby Vincent at the beginning of his life’s journey. It may be the one of the reasons why Vincent Willem van Gogh later founded the Van Gogh Museum.