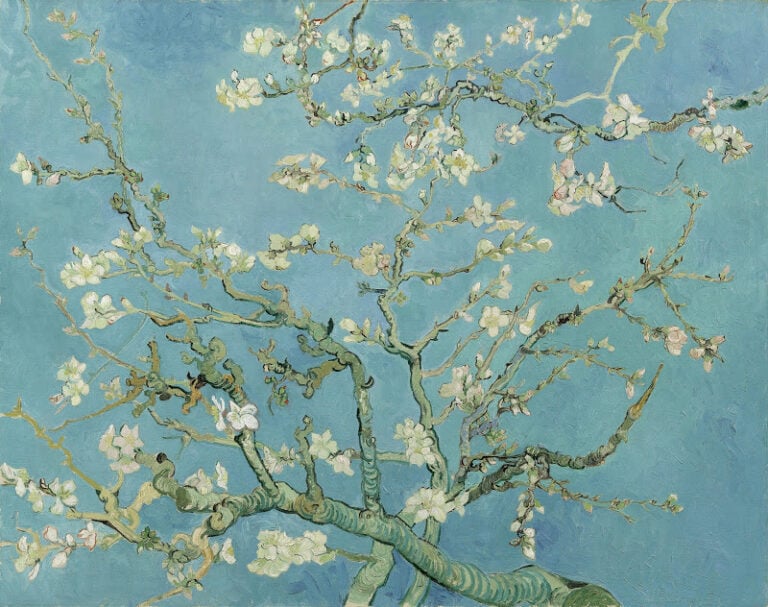 In a museum dedicated to a painter like Vincent van Gogh, you are bound to find more than ten highlights. But since we all like lists, and as lists have to be limited, and since ten is such a nice round number, today we present you with 10 highlights from the Van Gogh Museum in Amsterdam. We all instinctively associate van Gogh’s art with bright, warm yellows and cobalt blues. But there is so much more to his paintings, and the Van Gogh Museum’s online collection helps us discover it even if we cannot physically go to the museum.

The Potato Eaters is one of van Gogh’s early paintings. Preceded by multiple studies of peasants around the village of Nuenen. In this painting, Vincent proves he was becoming a good figure painter. The composition is complex, the lighting reminiscent of Rembrandt. Furthermore, he is already using color very consciously. Yes, you may find the painting dark and gloomy, as if the people were made of the same earth that they work on every day. And that was precisely van Gogh’s idea. Those are the people of the earth; hard-worn by the work they do. They are exhausted; their dinner very simple and directly sourced from the ground they work.

Van Gogh was more interested in the overall message of his painting and its impact than its physical accuracy. Hence, the peasants are ugly, their faces coarse. Van Gogh was a social radical and the struggle of the poor was very close to him. In this painting, he combines the proof of his own mastery with communicating what is important to him. Initially derided, the painting is now one of his most famous.

2. Women on the Peat Moor

This painting was completed two years before The Potato Eaters and shows how long-lasting his fascination with the simple country life really was, especially with the peasant’s hard work. Van Gogh did not idealize the country life; he was well aware of the backbreaking effort it required. Here. as the sun sets. the women are gathering the dried-out peat sods.

The gentle light is incredible; you can almost feel the air growing colder as the sun goes down. Yet the women persist in their work. They seem surrounded by the wavy ground and sky, thus becoming the only constants in this landscape of perpetual change. The ground and sky may change or be changed, but the women’s work would always remain the same toil. There is a calm melancholy to it.

This painting is very different from the previous two, even though it was created only five years after the Women on the Peat Moor. Here we already see the colors typically associated with van Gogh, as well as the vibrating brush strokes. His technique evolved to become more expressive. But it is also proof of his lifelong fascination with the hard work of peasants. Here the sun forms a halo around the sower’s head, turning him into a saint.

He painted this sower in November of 1888 while living in Arles. In October that year, he was joined by Paul Gaugin. Van Gogh hoped to start an artist colony in Arles.

‘You know I’ve always thought it ridiculous for painters to live alone &c. You always lose when you’re isolated.’

Wheatfield with Crows is one of Van Gogh’s most famous paintings. It is often claimed that this was his very last work. The menacing sky, the crows, and the dead-end path are said to refer to the end of his life approaching. But that is just a persistent myth. In fact, he made several other works after this one.

Here he focuses on nature and uses it to express his state of mind. The warm yellow field, which contrasts with the stormy cobalt skies, creates a tension that is not eased by the pattern of repeated silhouettes of crows. If you focus you can almost hear them cawing as they take flight. Irregular and yet somehow organized brushstrokes evoke the oncoming wind that carries the storm.

Here you can read more about the Wheatfield with Crows.

Let’s go back to happier times. Probably the happiest time in van Gogh’s life was 1888, when he lived in Arles – still full of life, happy about discovering his path, hopeful about creating an artist’s colony. He arrived in Arles in winter, but in a few short weeks Spring came and fruit trees blossomed. Enchanted by the awakening nature and drawing inspiration from Japanese prints, van Gogh painted a number of triptychs showing blossoming trees. From his letters to Theo, his brother, we know he was hoping they would sell well. In his own words:

‘You know these subjects are among the ones that cheer everyone up.’

What a different take on country life, compared to the previous paintings. It is as if here, van Gogh allows himself to be happy, to simply enjoy the beauty of nature. No more and no less.

Large blossom branches like this against a blue sky were one of Van Gogh’s favorite subjects. This subject is clearly inspired by the Japanese prints that he was collecting. This beautiful calmly cheerful painting was a gift to his brother and sister-in-law, who had just had a son. They named him Vincent Willem, and he grew up to become the founder of the Van Gogh Museum.

One year before his death on July 29th, 1890, Vincent van Gogh chose to enter Saint Paul de Mausole, an asylum in Saint-Rémy. Isolation was what he wanted. This beautiful painting is a study of color. What is interesting is the fact that originally the irises were purple, as in real life. But with time the pigment faded hence they turned cobalt blue. What remains is the wonderful contrast with a yellow background.

Van Gogh painted irises more than once, and it’s not surprising given how spectacular the flowers are. They lend themselves beautifully to his style, with quite broad linear outlines deriving from Japanese prints. Despite the flowing forms he strives for the same clarity of those prints.

In this self-portrait, Van Gogh is wearing a black felt hat, an overcoat, and a tie. He looks like a respectable gentleman. His piercing gaze pins us down and makes us watch. If the self-portrait could speak, we’d be compelled to listen. This is a man who suffered but also one regaining control of his fate. His drawn face is framed by the dark coat and hat and wrapped into the warmth of the red background and his ginger beard. The blue cravat provides a counterpoint to his pale face and extends the axis of his nose. You can sense despair here, but it is still laced with hope, unlike his later portraits, despite their more cheerful colors.

While he was in Arles, Van Gogh made this painting of his bedroom in the Yellow House. He prepared the room himself with simple furniture and with his own work on the wall. Research shows that the strongly contrasting colors we see in the work today are the result of discoloration over the years. The walls and doors, for instance, were originally purple rather than blue. The rules of perspective seem not to have been accurately applied throughout the painting, but this was a deliberate choice. Vincent told Theo in a letter that he had deliberately ‘flattened’ the interior and left out the shadows so that his picture would resemble a Japanese print.

Here you can read about other versions of this painting.

It would not be a list of highlights if it was missing the highlight of them all – Sunflowers. Again they come from a happy time at Arles. He painted five versions of this subject, mostly to prove that is was possible to create an image with numerous variations of a single color, without any loss of eloquence. He hung the first two in the room of Paul Gauguin. Gauguin was impressed by the sunflowers, which he thought were ‘completely Vincent’. Van Gogh had already painted a new version during his friend’s stay and Gauguin later asked for one as a gift, which Vincent was reluctant to give him. He later produced two loose copies, however, one of which is now in the Van Gogh Museum.