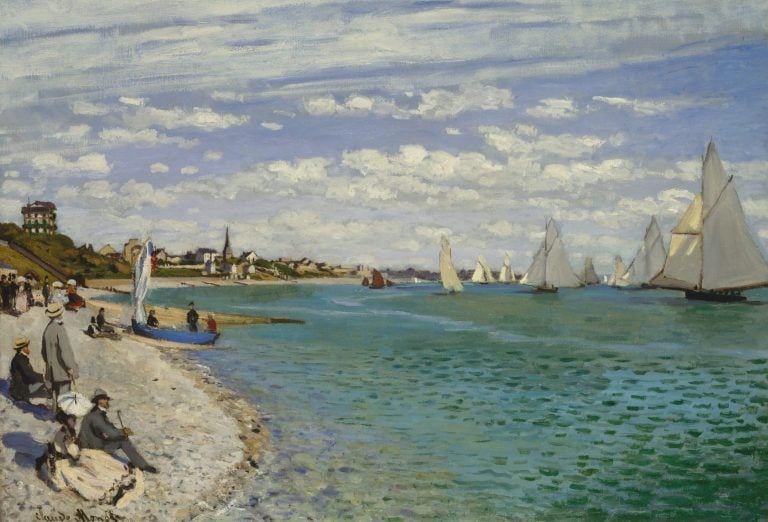 Are you still undecided of where to go on vacation this summer? Check out the top seven favourite summer destinations inspired by art and find a place for yourself!

1. Do you like to casually stroll in parks and forests?

Barbizon is a small village in northern France where, from the beginning of the 1820s, many artists would spend summers. Here, they would study nature and paint en plein air. Barbizon lies near the Fontainebleau forest, which formerly had been a preserve for kings. In the 19th century, it became a popular trip destination for the upper class.

Painters who often ventured into the woods together founded the Barbizon School, which gave the beginning to a new style of landscapes. They didn’t want to classicize or add any mythological meaning to their paintings – the practice strongly recommended by the French Academy. They would rather show the truth and strive for establishing landscape as a genre for itself.

Argenteuil is a tiny but very picturesque town just 11 kilometers from central Paris. Monet decided to move there when he returned to France from his stay in London in 1872. His friends such as Pierre-Auguste Renoir, Édouard Manet, or Alfred Sisley visited him in his house. Argenteuil was at that time a real artistic hub for the Impressionists. Monet created some of his most recognizable works here. He could often be seen painting the light reflections in the water while sitting in his studio-turned boat.

3. Would you prefer a full-body experience?

Then Moritzburg would be perfect for you.

The Moritzburg lakes lie near Dresden where many of the members of the German Expressionist group Die Brücke (The Bridge) lived. They would go to the lakes together with their models to bathe nude and paint. Their activities were a reaction against the corrupt way of urban life at the time that Die Brücke criticized.

4. Are you stuck in a city and need a quick weekend getaway?

Asnières lies in the suburbs of Paris along the river Seine. In the 19th century, it became another weekend destination (together with Barbizon) for both higher and working classes. In this painting, Seurat depicted the members of the lower class bathing on one bank of the river, whereas in the famous A Sunday Afternoon on the Island of La Grande Jatte, he portrayed the higher class on the opposite bank. One can see in the background the chimneys of the developing Parisian industry.

Time for the Gra(n)d Tour!

Francis Basset, later 1st Baron de Dunstanville and Basset, went to Rome for the Grand Tour, as most of the noble young Englishmen did in the 18th century. A trip to Europe was believed the best way to complete a gentleman’s education (women were considered too fragile to travel, which back then was a quite a venture). Usually, one would start off in Paris to later move down to Spain or Italy. Young men were meant to study ruins, old artifacts, and works of art. Many of them requested portraits which would document their education abroad. However, the tours often concentrated more on partying (and spending money on souvenirs like paintings, jewelry, or old artifacts) than studying. Oh, those youngsters.

6. Are you ready to take risks, even if they might not live up to your expectations?

Before his first trip to Tahiti, Paul Gauguin had moved to Brittany in order to experience, as he had imagined, the less civilized and therefore more spiritual way of life. Although the people in Brittany lived in a very similar way to Parisians, Gauguin still painted them wearing traditional costumes or using old-fashioned farming methods.

Similarly, he had imagined Tahiti as a promised land where people lived in harmony with nature and one another. Yet, when he stepped off the ship on the island, he faced a country largely Europeanized by France, as Tahiti was a French colony, where most of the Indigenous culture had been suppressed. Nonetheless, he still decided to depict the Tahiti he had dreamt of, that is the island of the spirits of nature, bright colors and mindful living.

If you study or work away from home, sometimes it’s just good to go back to your family house for the summer. When Joan Miro moved to Paris in 1918 to seriously focus on painting, he really missed Spain and his parents’ summer house in Mont-roig del Camp. He would usually return to Spain to spend the unbearably hot Parisian summer months on his family farm. His incredibly detailed painting The Farm shows how well Miro remembered his home and how much he loved, missed, and therefore idealized Spain.