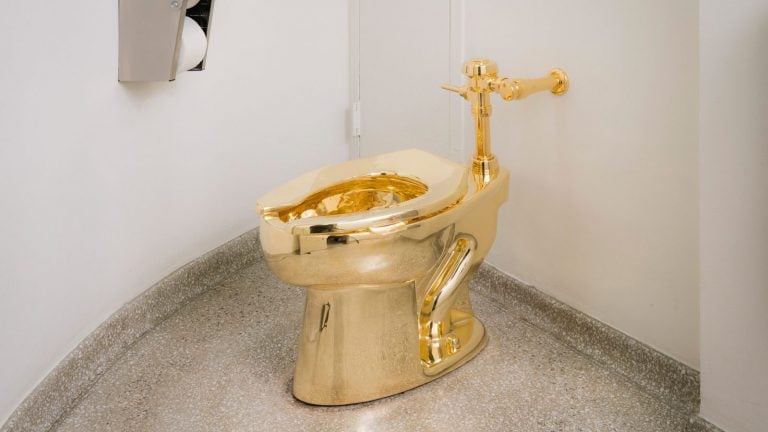 A joke, a provocation, or an attempt to attract your attention? Maybe none of these or maybe all of them. Here are the three of the most renowned toilets in art history. They may make you feel strange, uncomfortable, shocked, angry, or even disgusted. Perhaps you will despise art or vice versa, you will be pleasantly surprised how a toilet can literally have a “deep” meaning. But I promise that everything won’t be just weird and bizarre.

Yes, you read the title of this article correctly. We live in a world where art is often viewed through “aesthetic glasses”. But, as a result, we shouldn’t expect all art to be beautiful or purposeful. Art doesn’t need to have a secret or contain meaningful iconology based on biblical, mythological, or historical narrations. From the beginning of the 20th century, if not before, many artworks were supposed to be provocative. They were intended to surprise or shock the viewer and make him or her feel uncomfortable as they stood in front of them.

Many times in history, works of art have not been accepted as art at all. Sometimes they have only been admired and recognized after several years – not only by art critics but also by their audience. One person who certainly created a dividing line between “old art” and the new way of viewing it was the genius Marcel Duchamp. Let’s discover the toilets in art.

This porcelain urinal, titled Fountain, was turned upside down and signed “R. Mutt”. It was created by the most provocative and controversial French Dada artist of the 20th century – Marcel Duchamp. Fountain was part of Duchamp’s Readymade series, something he labeled as “anti-art”. If you are not familiar with readymades, they were ordinary manufactured objects which Duchamp selected and simply defined as art.

In 1917 Duchamp submitted Fountain to the first annual exhibition of the Society of Independent Artists staged at The Grand Central Palace, New York. However, the committee rejected the piece, even though the rules stated that all works would be accepted from artists who paid the fee. Instead, Fountain was displayed and photographed by Alfred Stieglitz in the 291 Art Gallery and the resulting photo appeared in The Blind Man magazine. Sadly, the original work by Duchamp (as well as Stieglitz’s negative) has been lost or destroyed by the artist himself.

In the 1960s Duchamp commissioned 17 replicas. These now form part of a number of significant collections such as that of the Centre Pompidou, Paris, Tate Modern, London, and the Philadelphia Museum of Art.

Sherrie Levine is an American photographer, painter, and conceptual artist. Her oeuvre consists of exact photographic reproductions of the work of other photographers like Walker Evans, Eliot Porter, or Edward Weston. She also appropriates already existing and recognizable artworks of artists like Edgar Degas, Constantin Brancusi and, in this case, Marcel Duchamp.

Levine created her piece, Fountain (Buddha), in 1991. It was exhibited in the Whitney Museum of American Art from November 2011 to January 2012, as part of an exhibition of her work entitled Mayhem. Fountain (Buddha) is Levine’s homage to Duchamp’s renowned readymade. With this artwork, she raised the question of originality and copy. The very title, Buddha, is itself a reference to the shape of a Buddha statue, something that the urinal resembles. The polished bronze surface of the urinal is, as Levine claims, a conscious allusion to the sculptures of Jean Arp and Constantin Brancusi.

Maurizio Cattelan is a contemporary Italian artist known for his satirical and provocative artworks. One of these is La Nona Ora (The Ninth Hour), and it depicts Pope John Paul II struck down by a meteorite. As you can imagine, this work caused a huge scandal in some more religious circles. Cattelan’s personal art practice has gained him a reputation as the art scene’s joker. All his works have a humorous twist and Jonathan P. Binstock, curator of contemporary art at the Corcoran Gallery of Art, describes him “as one of the great post-Duchampian artists and a smartass, too”.

In 2016 Cattelan came out of retirement to create a special project for the Guggenheim Museum in New York. In America, he replaced a toilet in one of the museum’s public restrooms with a fully functional toilet made from solid 18-carat gold, thus making an extravagant, luxury product available to the public. The work was interactive and visitors were invited to interact with it “individually and privately”; the approximate wait time to do this was two hours. As the Museum says of this work:

Cattelan’s toilet offers a wink to the excesses of the art market but also evokes the American dream of opportunity for all – its utility reminding us of an inescapable physical realities of our shared humanity.

Well, to be honest, we cannot disagree that Cattelan’s America is another piece of art inspired by Duchamp’s Fountain. But the golden toilet art is not the only shocking piece of work in Cattelan’s art production career. In one of our other articles, you can find more about his other obsessions such as pigeons.

In May 1961 the Italian artist Piero Manzoni became famous for creating a series of artworks consisting of 90 tin cans. Each was reportedly filled with 30 grams of his own excrement. The labels on the tins were written in four languages: Italian, English, French, and German. At the time the piece was created, Manzoni was producing works that explored the relationship between art production and human production. Another work made at that time was a series of balloons filled with his own breath.

Manzoni’s father, who owned a cannery, is said to have once told his son: “Your work is shit.” And in December 1961, Manzoni wrote in a letter to his friend Ben Vautier:

I should like all artists to sell their fingerprints, or else stage competitions to see who can draw the longest line or sell their shit in tins. The fingerprint is the only sign of the personality that can be accepted: if collectors want something intimate, really personal to the artist, there’s the artist’s own shit. that is really his.

Piero Manzoni in letter to his friend, Tate, London, UK.

The funny thing is that Manzoni priced his excrement as gold. The tins were originally to be valued according to their equivalent weight in gold, 37 dollars each, with the prize fluctuating according to the market. However, one tin was sold for 124,000 € at Sotheby’s on May 23, 2007; in August 2016, another tin was sold for a new record of 270,000 € at an art auction in Milan.

Naturally, everyone – whether or not they bought a can – has been curious ever since as to what is inside. Can it really be Manzoni’s excrement or is it something else instead? Only Bernard Bazile has dared to open a can (1989) and then exhibit the Artist’s shit, calling the piece: Boîte ouverte de Piero Manzoni (Opened can of Piero Manzoni). The can contained a wrapped unidentifiable object which Bazile didn’t open, so the content remains a much-disputed enigma.

It’s difficult to say how valuable these artworks really are. Should they be considered as works of art or are they just a joke or provocation? Maybe it is society, both of that time and even of today, that fails to understand their meaning and purpose. Perhaps the artists were mocking, ridiculing or underestimating classical works of art and the perceptions of art by their contemporaries. Perhaps they were simply promoting their own art. Certainly, the work they created was not supposed to be only retinal or beautiful to look at, but through it they hoped to leave a mark, a fingerprint. Ultimately, they snatched a common, everyday object from its environment and context and put it into a new one, and calling the result a work of art.

We can say with certainty that, in their own way, artists like Duchamp, Levine, Cattelan or Manzoni tried to give the world a message relating to the geopolitical or social situation as they saw it. Marcel Duchamp created his Fountain in the years of World War I. He pointed to the paradox and nonsense of war by turning his urinal as if to indicate that the whole world was upside down. Levine or Manzoni responded to questions arising in the postwar years such as liberty, feminism, freedom of speech, and of course, freedom of their own voice in art. Cattelan, even though he is considered a joker, hides deep references and remorse for our society in his work, howsoever absurd his sculptures may be.

Works of art are usually intended to be a mirror of our time and should also be a mirror for us, a mirror of our behavior as a society. The common element of all these artworks is that they are shocking and unexpected. And maybe it is alright to be shocked by them. We are used to living our lives from certain perspectives, ticking certain boxes, and these artists wipe off our “foggy glasses” and show us a different, maybe a clearer view.