Maurizio Cattelan and His Obsession with Pigeons 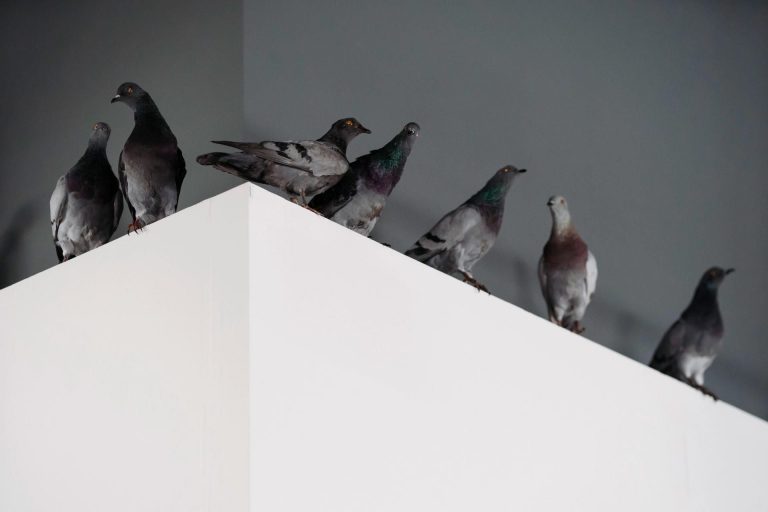 From Specimen to Contemporary Taxidermy

It was at the Venice Biennale in 1997 when Italian artist Maurizio Cattelan displayed 2000 stuffed pigeons installed at the top of the air conditioning pipes in the Italian pavilion. Their presence was revealed to the public by their fictitious excrements on the floor and on the pieces created by other artists displayed in the pavilion.

Also, the façade of the central building of the Biennale called the Palace of Exhibitions (formerly known as the Italian Pavilion) was full of them.

This piece was called Turisti which in Italian means “tourists”.

If you’ve ever been to St. Mark’s Square, or any other big historical square in Italy, you would immediately know what Cattelan wanted us to say. Those dirty gray birds have been pests and destroyers, gathering in hordes, dropping nasty surprises from the sky, spreading diseases, and costing millions of euros to clean up. In 2008, to avoid pigeon domination, city officials here passed an ordinance banning people from feeding them in the square.

Stuffed pigeons and fake pigeon excrement also reflect the human tourists who travel to Venice every two years to see the Biennale. Perched above the rafters of the Italian Pavilion, they are art objects that mimic their audience of visitors, seeming also to be duped witnesses of an empty pavilion.

In emphasizing the empty space of the pavilion, Cattelan was also emphasizing another pervasive theme in post-war Italian art – the notion of time as a defining element of space.

I guess if there was anything really provocative about this work it was in its relationship to time. Time doesn’t affect this place; basically all the Biennales look the same. If I could, I would love to set up the same show twice in two consecutive Biennales. I think that no one would notice. So I installed the birds and the birdshit to prove that everything stands still in that place, that “Time goes by so slowly” – that is another song.

However pigeons are quite international things. They also fit perfectly well in the environment of the Guggenheim Museum, where Maurizio Cattelan’s retrospective took place in 2011.

In 2016 at Monnaie in Paris, where a huge exhibition of Cattelan was held, he showed another piece of art with pigeons. It was an untitled sculpture of Cattelan peeking out from a hole in the floor and Others – pigeons that overlook visitors from different vantage points throughout the space. It is a very weird feeling when you realize they are up there, looking at you and the other visitors.