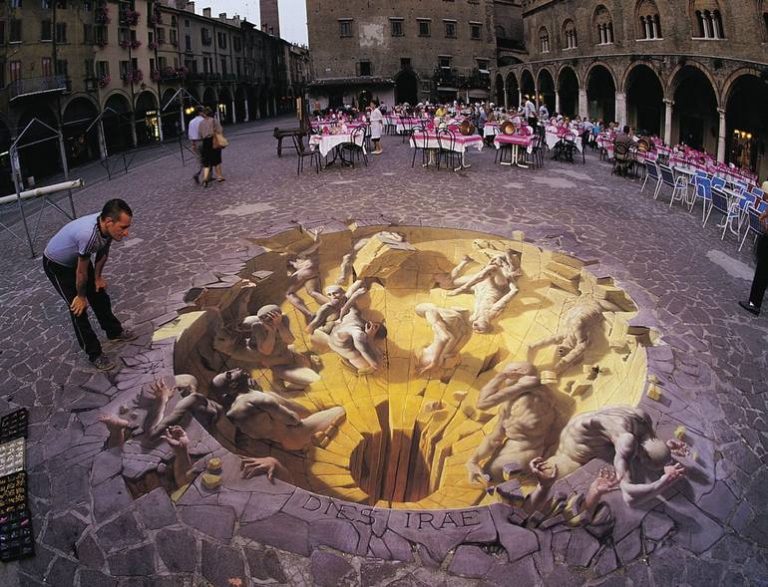 Far Beyond Illusion: M.C. Escher and the Illustration of the Impossible

Without knowing, you have more than likely seen an example or two of trompe l’oeil art. It is a term that encompasses many art forms in its meaning, ranging from architecture and paintings to sculptures.

Coined by the French artist Louis-Léopold Boilly, the term means “to deceive the eye.” It is a technique in which the artist uses realistic imagery to create an illusion where a flat surface appears to be more than meets the eye. But how do they accomplish this effect?

In order to perfect this technique, in drawing and painting particularly, a combination of perspective and chiaroscuro (the use of dramatic light and shade to create depth in their work) is used to fool the eye. Look at Andrea Mantegna‘s Oculus. One gets the idea that there is actually an opening at the top of the ceiling, showing the clouds, angels, and on-lookers who all stand high above the crowds.

Though the term is relatively new, the technique has been practiced since long before. The Greeks created frescoes on their walls, replicating columns, sculptures, and themes from nature.

From the great works by the Renaissance artists to modern sidewalk or street art of today, there are a plethora of artists and artworks to discuss. Here is a highlight reel of just a few of those.

Masaccio’s Holy Trinity fresco, located in Florence, Italy, is one of the earliest examples of using linear perspective to create what appears to be an alcove where the painting recedes into the wall. But, it is the clever use of math and shadows on a flat surface that fools the eye. The artist painted the fresco from the perspective of looking up from Christ’s feet.

An Irish-born and American-raised artist in the 19th century, William Michael Harnett painted quite a few artworks depicting this mastery of trompe l’oeil via oil painting. From a hanging chicken to a violin with sheet music, his paintings fool the eye so well that you may be half-tempted to reach out and touch the individual objects.

The Dutch artist Maurits Cornelis Escher was known for his optical illusions. Whether it be a reflection, a tessellation, or a mind-bending drawing, one can never be entirely sure of what they are seeing. Many of his artworks fall under the definition of trompe l’oeil.

In the mid-1980s, Richard Haas created a massive mural on the blank wall of the Miami-based Fontainebleau Hotel. The mural lasted from 1986 to 2002 and gave the illusion that you could walk right through the space under an elaborate arch that led to the beach. The roughly 6-story mural would later be destroyed alongside the building; Haas’ mural will not be forgotten.

Dutch street artist Jan Is De Man and graffiti artist Deer Feed took an otherwise unremarkable wall in Utrecht, Netherlands, and transformed it into three shelves of larger-than-life books. From a good distance, they look real. Imagine trying to read one of those. Check out Jan Is De Man’s website to find more murals like this one and so many more.

Perhaps a more modern take on the technique comes from the Dutch artist Lieven Hendriks. Whether it is nails or finger smudges, Hendriks works have the audience questioning what they are seeing.

Take one wrong step, and you’ll fall down an endless hole. But wait! Your eyes deceive you, for that is just a really well-executed piece of literal street art. Using a variety of mediums, artists such as Kurt Wenner, Edgar Mueller, and Julian Beever use perspective to create scenes with so much life that it is hard to reconcile that they are not actually 3-dimensional.

For centuries, artists have pushed themselves, crossing boundaries to bring audiences spectacular works of art. And why not? Techniques such as trompe l’oeil have been key to those efforts. From giant animals painted on sidewalks using perspective to paintings of drawings nailed to a board, is there a stopping point? Or will artists continue to push the limits of the real and the world of illusion? I think we all know the answer to that question.

The longer that artists are left to perfect and improve upon old techniques, the notion of trompe l’oeil will only continue to impress audiences and have us all questioning what is real and what is an image painted on a flat surface. Beyond the artists and art listed in this article, there are plenty more out there that deserve recognition. Do a quick Google search for trompe l’oeil artists and art, and you will have a full day of reading material. Happy searching!