Maurizio Cattelan And His Golden “America” 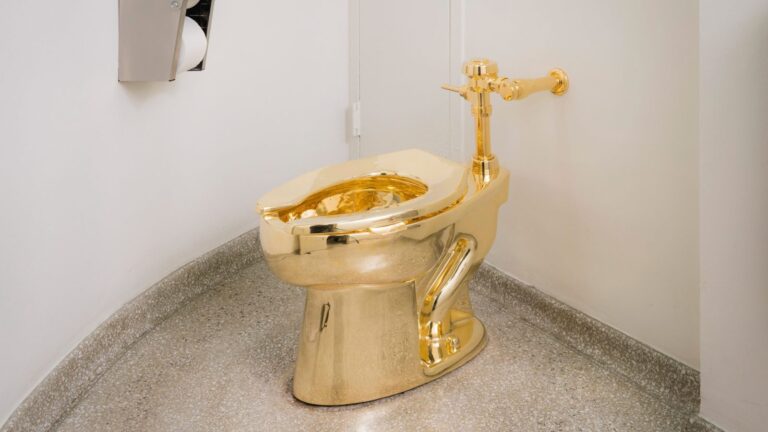 Couple of days ago the White House asked Guggenheim Museum to borrow a painting “Landscape With Snow” by Vincent van Gogh for the President and Melania Trump’s private living quarters.

The White House didn’t respond to that answer.

Maurizio Cattelan is an Italian artist known for his satirical sculptures, particularly La Nona Ora (The Ninth Hour, depicting Pope John Paul II struck down by a meteorite) which caused a huge scandal in some more religious circles.  Cattelan’s personal art practice has gained him a reputation as an art scene’s joker. All his works have a humorous twist. He has been described by Jonathan P. Binstock, curator of contemporary art at the Corcoran Gallery of Art “as one of the great post-Duchampian artists and a smartass, too”.

And now his “America”, a satire aimed at the excess of wealth in this country is back in the spotlight thanks to Guggenheim’s response to the White House request.

Cattelan declined to reveal the cost of the gold it took to create “America,” though it has been estimated to have been more than $1 million. The artist has resisted interpreting his work, telling interviewers he would leave that to his audience. He conceived of the gold toilet before Trump’s candidacy, though he has acknowledged that he might have been influenced by the mogul’s almost unavoidable place in American culture.

“It was probably in the air,” he told a Guggenheim blogger in 2016 as “America” went on display. For a year, Guggenheim exhibited “America” — in a public restroom on the museum’s fifth floor for visitors to use. It was a hit.

Cattelan has also suggested that he had in mind the wealth that permeates aspects of society, describing the golden toilet “as 1 percent art for the 99 percent.”

The masterpiece perfect for the times we live in.