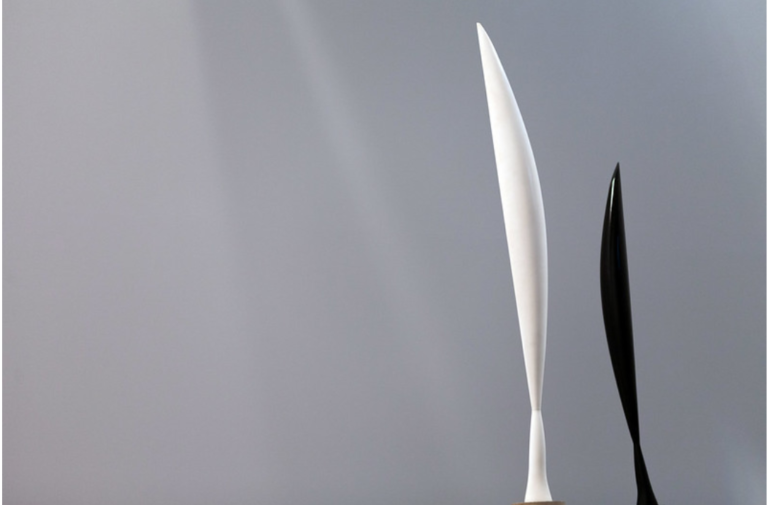 Constantin Brâncuși, Bird in Space. Exhibited at the National Gallery of Australia in Canberra, Australia. Flickr.

Not All There – The Enigmatic Sculptures Of Bruno Catalano

In 1926, Bird in Space crossed the Atlantic Ocean from Paris to New York City for an exhibition at the Brummer Gallery, curated by one of Brâncuși‘s most trusted friends – Marcel Duchamp. But what was different this time? This is the amazing case of Bird in Space and how it set a precedent, changing the legal definition of art forever.

Who Was Constantin Brâncuși?

Constantin Brâncuși was a sculptor born in 1876, in Hobizta, a small Romanian village. He attended the Academy of Fine Arts in Bucharest and then left for Paris in 1904. After two months under Rodin’s apprenticeship, Brâncuși decided to pave his own way towards an abstract approach to sculpture, one that concentrated on the essence of things, rather than physical qualities. He said:

I felt that I was not giving anything by following the conventional mode of sculpture.

As the years went by, he gained international fame. Nowadays, his oeuvres are displayed at museums such as MoMA, Solomin R Guggenheim Museum, and The Met. Brâncuși’s artistic style is characterized by an unexpected interest in light and movement in a spatio-temporal context, enriched with inflexible materials and modesty in the finer details.

What’s with All the Birds?

One of Brâncuși’s lifelong passions was the motif of the bird, which he addressed for over 40 years in more than 30 works, in sculptures such as his Maiastra, Golden Bird and Bird in Space sequels.

Maybe the most recognizable one, L’Oiseau dans L’Espace (Bird in Space, 1923-1940), is an acute example of detail reduction and depiction of flight in connection with the materialistic world. He played with diverse materials in this series of 16 models, all smoothened out by the artist himself. Brâncuși reduced the beak and the head of the animal to a slanting oval and elongated the body to such an extent that no feather or wings can be noticed. The graceful footing raises the bird into the ether, with an upward accelerating motion.

Brâncuși vs. the USA

A version of Bird in Space was sent for an exhibition in New York but when it reached the border, the Customs officials imposed a 40% tariff on its value, even though, according to the Tariff Act of 1922, all works of art were permitted to enter the country free of tax. Apparently, Brâncuși’s artwork did not fit the definition of sculpture at that time, being categorized instead under “Kitchen utensils and Hospital Supplies” as a “manufacture of metal”.

Edward Steichen, the owner of the sculpture, along with other supporters of Brâncuși, enraged by this negligence, complained in the defense of Bird in Space. The US government adopted a strategy which aimed to prove whether or not the sculpture depicted a real bird, putting pressure on witnesses to answer the question. According to the legislation, the sculpture is “that branch of the free fine arts which chisels or carves out” for “subsequent reproduction by carving or casting, imitation of natural objects, chiefly the human form, and represents such objects in their true proportions of length, breadth, and thickness” (Treasury Decisions Under Customs and Other Laws: Volume 63, United States, Department of the Treasury. December 31, 1932, U.S. Government Printing Office).

The defense maintained a strong position regarding the irrelevance of the definition of sculpture in this context, as the new school of art, which focused on abstraction, was gaining importance at the time. It also specified that the piece was an original made by a professional artist. When called to the stand, critic Frank Crowninshield articulated:

It has the suggestion of flight, it suggests grace, aspiration, vigor, coupled with speed in the spirit of strength, potency, beauty, just as a bird does. But just the name, the title, of this work, why, really, it does not mean much.

This was a meaningful argument since it managed to convince the court that their definition of art was outdated. Abstraction is about ideas, not depiction, as it speaks to each of us differently since we feel and see based on our past experiences. The verdict of Judge J. Waite stated that “Whether we are in sympathy with these newer ideas and the schools which represent them, we think the facts of their existence and their influence upon the art world as recognized by the courts must be considered.”

Nevertheless, they should be acknowledged. Bird in Space was allowed in the end, free entry to the country under section 1704 (of a US law), as it was decided that it had “purely ornamental purposes” and “is the original production of a professional sculptor”.

Today, the famous Bird in Space is at the Seattle Art Museum, but sadly, not on display. Over the course of nearly a century, Bird in Space set a courageous example of modern, controversial ideas that changed the world of art as we view it nowadays. Brâncuși began as a simple boy but evolved into a complex sculptor who battled for his rightful place in history. He should be remembered for his creative genius which taught us a lesson about acceptance and innovation. As “real birds” transform into fluid movements full of feeling, our perspective on life should adapt to the new ideas that are yet to come.