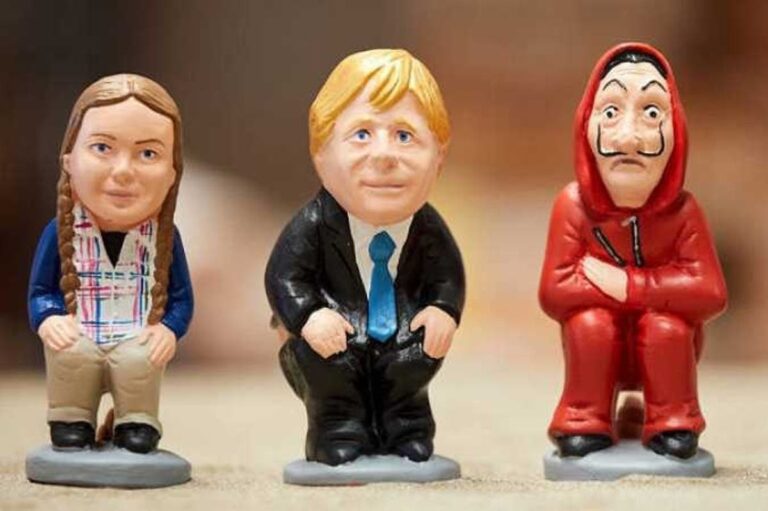 As Christmas approaches, many of us are probably decorating our homes for the holidays which will hopefully bring us some joy. One of the main elements of decoration in the Christian tradition is the Nativity scene. So, let us take a look at a not-so-well-known character in this scene. In addition to the usual figures of the Virgin Mary, Joseph, baby Jesus, the shepherds, and the animals surrounding the holy scene, in Catalonia and some other regions of Southern Europe we find the caganer.

The caganer, literally meaning “the defecator,” is one of the most characteristic figures in Catalan Christmas imagery. It represents a person defecating in the open air with their buttocks exposed. The male version is called caganer, while the female version is a caganera. Due to the fertilizing properties of excrement, this figure is said to bring luck and prosperity to the home. It is usually placed in a hidden spot of the nativity scene. For example, people place it behind a bush or under a bridge. At Christmas family gatherings, looking for the caganer is often a source of amusement for children. In addition to Catalonia, other Spanish regions such as Valencia and the Balearic Islands do it as well. Portugal and some Italian cities also participate in this tradition.

Different versions explain the origin and meaning of the caganer. As stated by the Amics del Caganer association, based on the book El caganer by Jordi Arruga and Josep Mañà, the figure is found in tiles from the 16th, 17th, and 18th centuries. Its incorporation into the nativity scene possibly took place during the Baroque. Indeed, the representation of such an ordinary human act corresponds to the characteristics of this period in Spain. During this time, previously underestimated aspects of everyday life were dignified and became artistic themes.

As for its meaning, it may be regarded as a figure which harmonizes the holy nature of the nativity scene with the human nature of our biological condition. It is also seen as an egalitarian and “pleasantly subversive” figure since it represents an act that all of us do, however powerful we may be. Additionally, its meaning has a component of local identity, in contrast with more globally widespread elements of decoration such as Santa Claus or the Christmas Tree.

The traditional version of the caganer is made from clay and painted by hand. It represents a peasant wearing a barretina – a red cap made of wool – and sometimes smoking a pipe. However, new models are created every year and the sources of inspiration are vast. Some special models correspond to specific events. For example, the Olympic caganer was made in 1986, when Barcelona was nominated as the Olympic city. In 2018, following the secessionist referendum of the previous year, caganers were made depicting pro-independence politicians, judges, and even a yellow ribbon. The yellow ribbon is the symbol used by pro-independence Catalans to demand the liberation of politicians who were imprisoned following the failed attempt to declare independence from Spain. In 2020, we found caganers related to Covid-19, such as world leaders wearing face masks and a figure of Fernando Simón, the epidemiologist who led the Spanish government’s response to the pandemic.

Other models depict celebrities from a wide variety of fields. Cagners wearing FC Barcelona T-shirts were made to represent footballers Lionel Messi and Gerard Piqué. A figure inspired by Catalan singer Rosalía was a best-selling caganera in 2019. In 2020, American President Donald Trump, King Felipe VI and Queen Letizia of Spain, Spanish President Pedro Sánchez, and environmental activist Greta Thunberg, among many other actors of the troubled national and international scene have sparked the creativity of the makers of caganers.

Recently deceased celebrities are also taken into account for the collection of the corresponding year. A caganera representing Catalan soprano Montserrat Caballé appeared in 2018. A caganer depicting Argentinian footballer Diego Maradona appears as one of the novelties of this year’s collection. Fictional characters from books, films, and series, and artistic masterpieces such as the Mona Lisa, Michelangelo’s David, and the gargoyles of Notre Dame complete our seemingly unending list of possible caganers.

Caganers are much more than the naughty figures that they seem. They are artistic objects which mirror the social reality of their time. New creations and the list of best-selling caganers of each Christmas season are indicative of the most controversial issues of the year. During the last three years, for instance, the claim for Catalan independence has been a recurrent topic. And if we take a step back and define social reality not only as topicality but as the wider social framework in which our lives take place, we could assert that caganers mirror the dual nature of globalization.

On the one side, they contribute to the global popularity of local life. The Catalan custom of the castellers – human towers built in public squares on the occasion of festivals – and the political demand to vote on independence are ingeniously depicted in caganers. Regarding the secessionist claim, it is even possible to establish a link between the caganers referring to the Catalan case and those alluding to similar claims in the Basque Country and in Scotland.

Making of caganers inspired by international celebrities clearly exemplifies the adaptation of a local product to the global market. With around 50% of the foreign sales shipped to the United States and growing international membership in the Amics del Caganer association, it is likely that we will continue to see caganers resembling Joe Biden and David Bowie next to Pedro Sánchez and Rosalía.