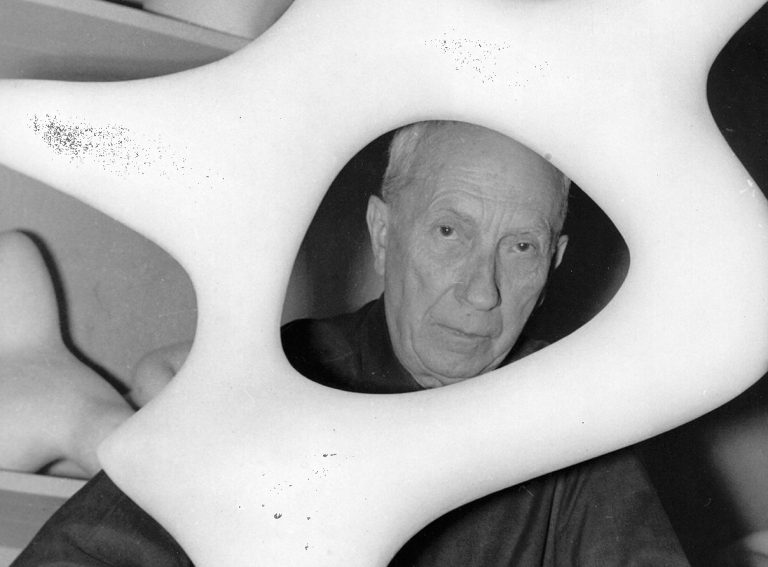 Watch One Of The First Dadaist Films by Man Ray

Voices of Dada is part of a popular series of archival audio CDs exploring 20th century avant-garde and modern art. The album features interviews and phonetic poetry by six leading figures from the Dada movement, active between 1916 and 1923. Listen to one of the Jean Arp’s Dada recordings!

Most recordings are in English but not all – below you can hear a rare recording taken from this album of Jean Arp contributing Dada Sprüche, speaking in German. This disc compiles key interviews and phonetic poetry pieces which sum up the Dadaist movement quite appropriately.

Born in Strasbourg, the capital of Alsace, Jean (Hans) Arp was classified as an enemy by Germany when war broke out in 1914. The following year he took refuge in Switzerland. Arp was involved in Zurich Dada from the outset, and like many of his fellow Dadaists was talented both in literature and the visual arts. Arp designed the décor for Hugo Ball’s Cabaret Voltaire which opened its doors on 5 February 1916. Later Arp performed his eccentric, humorous poems onstage there.

Two themes dominate Arp’s work within Dada: collaboration with other artists and the creative possibilities afforded by chance.

Nowadays you can learn more about Arp from three different art foundations!

– The Fondation Arp in Clamart (France) is where you can visit his atelier.

– The largest collection of Arp’s works is housed in Germany in Stiftung Hans Arp und Sophie Taeuber-Arp which was created in 1977 by art dealer Johannes Wasmuth.

In 1919, Max Ernst worked together with Hans Arp in Cologne where they founded a branch of the Dadaist Movement: Surrealism. It became a new niche...